I’m new to Wyze and really like many of the qualities, especially for the price point. I have been making rules and schedules but it doesn’t seem to be as simple as it looks like it should be. Can someone point me to an article that helps guide me through the highs and lows of automating my 1 Pan Cam and 2 V2s? I would like to buy more Wyze products but not until I know the automation works

Thank you for your reply, Brlepage, but this only explains how easy I thought it should be but none of that seems to work for my cameras.
I have read many articles about rules and see that some people think it is as easy as select the camera, select the action and set a time as indicated in the link you provided but that seems to seldom work for me. The time to start a rule comes but nothing changes. Or things change to the rule but don’t go back after the end time. Sometimes the times come and go and nothing changes.

This is why I am looking for some tips or tricks that are not covered in that article.

Can I tell 1 camera to start a recording event only after another one sees a person and then go back to not recording events? This would prevent dozens of event recording that are not desired.

It seems some people say you have to have a rule to start and a rule to stop. Some say the scheduling portion doesn’t work.

I am usually quite good at things as simple as rules seem but nothing seems to work so I am asking for someone with experience to guy me around the “gotcha’s” or “it seems odd but,” situations.

Is it really supposed t be as simple as the rules and schedules seem? If so, do I have defective products and need to source elsewhere?

That simple schedule works for me on my v2 cams. For example, this cam is blinded by direct sun from around noon until 4PM. So I record motion events only from 4PM - noon the next day:

The time to start a rule comes but nothing changes. Or things change to the rule but don’t go back after the end time. Sometimes the times come and go and nothing changes.

Whenever I get flaky results, I just think backwards and create a reverse schedule or rule and my problems disappear. I had numerous problems getting my Wyze Plugs to behave to my schedules. Either they wouldn’t turn on or they wouldn’t turn off. Sometimes, they’d skip the 1st day of the week. I don’t know if Wyze fixed these problems, but I don’t have problems anymore since I started creating reverse schedules for my plugs. For example, I want a plug to turn a floor lamp on at night. Instead of creating the usual schedule to turn on/off, I created the schedule to turn off/on (daytime off vs nighttime on):

Just wondering… before you started applying schedules, did you test your basic cam settings to ensure you even get 24/7 motion events working?

Thanks, Seapup. I have been setting schedules to start 10or 15 mins in the future to see if the new schedule works right after writing it and it often does not. I read in a couple articles that we need to wait 24 hours for the schedule to work and thought that was only if the new schedule had a start time earlier than the time it was written but, as an experiment, I added my new schedule yesterday and tolerated the alerts every 5 mins from 3 different cameras all day but today the schedule seemed to kick in and seems to be working now. Is it normal to expect to wait 24 hours for things to take affect?
I will now start writing schedules and let them sit for a day and see if things work better.

Does it matter if I set schedules for the cameras as a group instead of individual cameras?

I was looking at how I wrote the rules yesterday that seem to have started working this morning and I had written a rule for each camera to record events between certain hours rather than writing the rules to the group.

it normal to expect to wait 24 hours for things to take affect?

I would say no, but the time a rule is set to start, needs to occur so the rule can take effect. Say I now want to make a rule to turn my outside light on from 5p to 11p. Well it’s 5:23p now So am gonna have to wait untill tomorrow at 5 for that rule to start.

That’s what I was thinking and expecting and that’s why I went back to double check my settings. I have been trying to set them as a group and this time I wrote them individually. I think the purpose of setting them in a group is to make scheduling easier than calling out each device individually so I need continue wondering why the schedule worked this time and not other times.

I must say I am still not convinced the cameras aren’t flaky.

Is it normal to expect to wait 24 hours for things to take affect?

Definitely not normal. I’ve done the same testing new Wyze devices with the turn on or off set to a minute ahead and it worked fine. I also have rules and schedules applied to groups and they’ve been working without a hitch.

Agreed, using groups is much easier than setting up a rule one bulb at a time. I have had a rule to turn on my exterior lights (3bulbs) on and off since last year and have had no issues. Well, I’d adjust a hour this way or that due to sun up and sun down changing with the seasons.

When testing I’d set a rule for a min or two out and have had no issues there either. Give it enough time to update to the cloud and good to go.

Thanks to everyone who helped me. I have rewritten the schedule using groups and they seem to be working well. I now have made 2 schedules that work; one with individual devices and then using groups and both are working.

I think my break through was turning everything on for all devices and for all phones\computers that would get notifications and then write rules to turn things off when I don’t want those features on. Previously I was writing rules to turn things on. Keep in mind I am only working with cameras.

I don’t know if this is by design or not but once I took the philosophy that everything should be on until a rule or schedule turns it off, everything came together. That would be my tip or trick for anyone just starting.

If my next couple rules\schedules work, I will be turning my home into a Wyze home!

And that reminds me - Wyze software could be made to track sunrise/sunset. It’s a few minutes difference everyday and easy enough to calculate.

Yep! It’s a wishlist item. Visit the link and give it a vote!

Have an option on scheduling for sunrise or sunset instead of a set time. It could easily be calculated based on night vision activation or deactivation from prior days. Maybe even call it something associated with night vision. This could be helpful in many situations. One example would be for those suffering from headlights. When night vision is activated is when headlights come on, so then users could turn motion detection off, and on again when night vision deactivates.

I have 3 cameras in the backyard - I created group called “Backyard” and added 3 camera’s to this group. Then setup a rule for it to turn on at 6PM and turn off at 8AM but this rule fails with error message Timeout. (Screenshot attached). 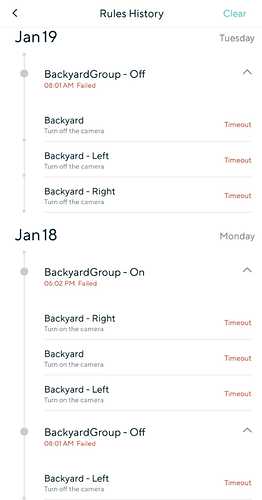