It makes way more business sense to focus on Cam Plus first since they make a ton more money both initially and long term residually. Residual income is the golden goose. All else comes second, especially now that they have investors breathing over their shoulders.

I know, thats the way the economy works. I was just to naive to believe Wyze would be a little better.
Especially when marketed as the “Everything Cam”

Wyze usually takes months and months and sometimes years to deliver promised “future features”…I love them and all, but I quickly learned “working on it” means don’t buy it expecting it anytime soon, but they do usually eventually get around to things they say it is their intent to do… I usually plan on a year away.

This one could be sooner since they just recently made updates to the V2 RTSP firmware after previously telling everyone not to ever expect an update. This indicates they are actively working on RTSP. It would also make sense to offer it as lots of people like RTSP for home security use (local NAS recording) and Wyze’s priority is currently their home security integration. These are big positive signs you’ll get what you want sooner than normal.

I understand. Already had V2’s with the RTSP updates. When I recieved info on V3 and that they would be better I pulled the trigger and pre-ordered only to find out this wasn’t completely true.
Like I said it 's my fault for not investigating .

I have 2 v3 devices brand new in the box waiting, I am a blue Iris user so need that feature.
I do have Tiny cam Pro on my Nvidia shield and it supports wyze cloud so the v3’s do work there just fine.

I am a blue Iris user so need that feature.
I do have Tiny cam Pro on my Nvidia shield and it supports wyze cloud

Believe it or not I think you can access those TinyCam Wyze feeds right now in Blue Iris.

Holy mackerel, every time I think I’ve reached the limit of what it can do, TinyCam surprises me again. So the FireTV version doesn’t seem to allow adding an “Android camera”. How to get that tablet cam feed in another instance of TinyCam on a TV? If only one instance of TinyCam could pull a particular camera feed from the web server of the first TinyCam instance. No way, right? Guess again. And it works!

I am seeing lots of URLs and gibberish but nothing that specifically says how to get a stream from tiny cam they have URLs but you have to hit a specific camera or channel and that is not clear.
is there some where that gives a more detail explanation on how to do with wyze?

Yah, calling my posts gibberish isn’t the best way to get me to hold your hand through this. It works. Treat the TinyCam web server as if it were an Axis camera with multiple channels.

You have to first make sure that the Wyze cameras are working with its app before setting them up with tinycam. That ensures that the cameras were set up correctly in the first place, otherwise, you’re liable to waste your time tinkering with tinycam setup and not make any progress.

Setting up with tinycam is simple. Just make sure you have the correct brand selected, then choose the channel. If I remember right, there are two separate “brand” entries for Wyze cams.

The “channel” is a misnomer. It’s just an index to your camera collection; ie, 0 is for the first, 1 for the next and so on. You have to guess which “channel” is associated with which camera. Which one is first? Second? That depends on how the Wyze servers ordered your cameras in its configuration.

Additionally, the tinycam publisher responds to email. You’re likely to get better responses to tinycam questions like this.

Your input was valuable to thank you, all my Wyze cameras work perfectly on Tiny cam, I logged into the cloud and give them each channel numbers 0,1,2,3, respectively. then I can view the URL via the tiny cam web browser and paste it into a window and see the stream from that camera perfectly. When I put this stream URL into blue iris it does not like it although I would expect differently. that is where I got stuck.

I don’t have blue iris. Might want to peruse their user forums to see if anyone is able to use V3. It could be some incompatibility with their app.

Sorry was referring to the web page that listed all the URL’s I apologize meant no disrespect. Actually, it was the main URL they had lots of examples but nothing that really pertained to tiny cam pro. the link or URL in the example did not specify the channel or what camera was to be selected it was just a root URL path. although it will log in you won’t see any feeds.
My feeds show up with 192.168.0.55;8083/live?cameraId=1290657941 this shows the Wyze V3 camera video perfectly. just? Blue Iris does not like this type of URL. So I was having trouble understanding how th examples worked when no camera was specified in the URL.

Okay, no problem then. Your issue is you are currently trying the web viewer. What you want at Blue Iris is the equivalent RTSP settings, not really a browser URL. Again, you treat it as an Axis brand camera.

Here’s what I am using, although not in Blue Iris (I am using another copy of TinyCam.)

I can connect my TinyCam to my Wyze V3. My question is, how do I connect my NVR to TinyCam feed from Wyze? Is it an RTSP connection setting? For example, I use ContaCam software. Pretty basic, but does what I need. What connection settings would I use to connect to the TinyCam channel streaming output from my Wyze?

None of these settings worked: 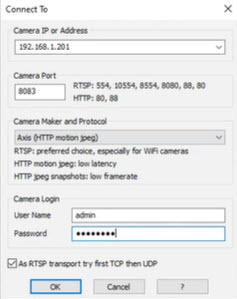 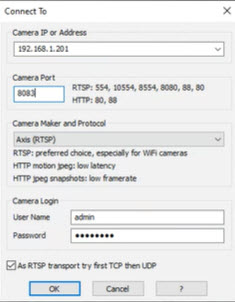 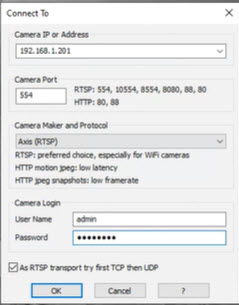 The first one looks correct… Your TinyCam Pro has its web server up (and you’re on the same local WiFi)?

Try this in your browser first

That Totally worked for Blue Iris, I had to modify the IP and set it to camera #28 but I have the Wyze V3 Now present in my Blue IRIS Configuration.
That my friend was the magic URL, I used in the browser till I got the right camera. 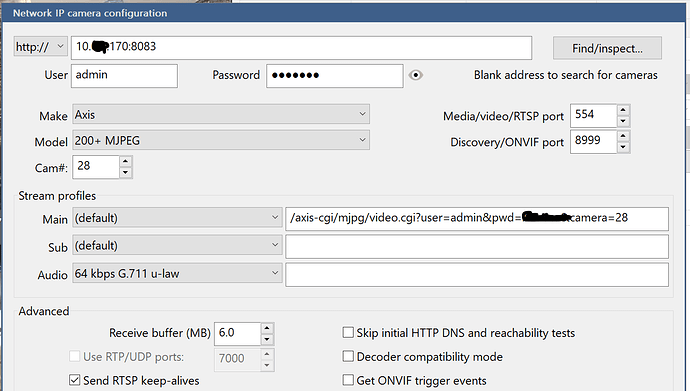 Check out the big Class A private address on Dudley here.

Glad you got it working. Interesting that my TinyCam client doesn’t need the full URL. I suppose it’s implied by the camera type.

I could probably tweek it a bit to minimize the config that was just the first initial stream that worked. Yes I use the 10.o’s for my Local subnet. multiple vlans 254 each.

Let us know how stable it is for you after several hours or days of having it in there (dropped connections, missing periods of recordings, etc). It would be interesting to hear how well it works out stability-wise.

I had a wyze v2 same location and it was very unstable, drop off every day had to constantly reboot it, issues with wifi. Replaced with a v3 and its been solid (all via wyze app) so now I will test it with blueiris, then when they come out with RTSP firmware further comparison will be done.