RTSP Boot loop on a CAM 2

Hello. I’m trying to install the RTSP firmware on my Cam 2… I’m using a 2GB microSD card for the demo.bin. I get the blue light setup to start, but then it simply goes into a boot loop constantly clicking…

The only way I can get back to normal is to download the “normal” firmware (4.9.6.199) to the same microSD card, rename to demo.bin and do the setup button / power cycle trigger. It then resets to the normal production firmware.

Why can’t I get the RTSP version installed?

Corrupted file, the wrong file, or not following the procedure. Have you flashed any other V2 cameras with that file and uSD card?

But, I can format it, download the RTSP version again and re-try it all.

Reformated the microSD card… downloaded the RTSP firmware and put it on the root of the card named as demo.bin.

When the new firmware is recognized. The camera starts a reboot loop. I assume it’s rebooting, as I hear it click every 1-2 seconds…and the yellow light comes on, goes off, and keeps repeating.

I’ll let it go for another 5 minutes, but it doesn’t seem right…

Could the problem be with the BASE firmware? I’m trying to install the RTSP firmware from the base firmware 4.9.6.199… Could that be the problem?

The base firmware is only used with the outdoor camera WCO not the V2
There is No rtsp firmware for the Outdoor Camera . You refer to Cam 2 , Is that the V2? 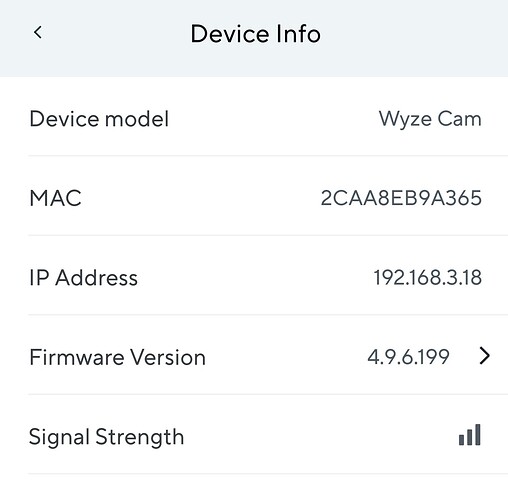 The firmware you listed is for a V2 camera
I got confused when you mentioned Base firmware
I have been using the 4.28.4.41 Rtsp firmware on my V2. for over a year now.

I did see that some people were having issues installing it on New V2 cameras.
An maybe first installing an older standard firmware first
Unfortunately wyze removed most of the older software from there site
Older firmware versions are being removed from this page because they are incompatible with newer Wyze Cams and would break a newer camera if applied.