That’s the noise, though it’s not quite as pronounced in my case. My vac has just over 840 minutes of cleaning time, I started hearing it around 720.

I came here just to see what this noise was. I just got my robot vac for our upstairs (one room, very thick carpet). I’ve had lots of robots and I have never heard one work this way. I’m still trying to decide if I should keep it or not as I didn’t realize it didn’t support multiple floors when I got it. I’ve been using a Neato D7 that died and an iRobot S7. After having the S7 for a bit, I wouldn’t get another VSLAM robot. It’s soooo much slower to clean a room than the lidar robots. Both of these supported multiple floors so I didn’t even check to if the Wyze one did or not.

I just got mine a week ago and it sounds JUST like that. Yes, carpet only, not hard floor (I have mostly carpet). Happens during straight runs, for a while I thought it was just a thing on turns but I now see it happens constantly. I have low pile / Berber carpet and medium pile loop carpet elsewhere, same issue on both. I can tell it IS affecting carpet cleaning performance. I have a test in mind that may visually show the issue, but I think I may just want to return this, mapping is being qu…

I just ran into this issue. It was working fine for a couple of weeks and all of a sudden I’m getting almost no dirt/hair in the dust bin. Listening i hear the brush turning on for about 1 out of 5 seconds. Which of course, makes it useless on carpet. The brush roll spins freely yet can’t seem to stay turning anymore. It worked fine at first!

Tried calling support but I think the current message that just constantly repeats is designed to annoy you into hanging up. No email or chat support options. I’m afraid my opinion of Wyze products/support is slipping. It’s too bad because I’ve been using their stuff for years now. I hope they can work through these challenges.

I’ll probably be returning the vacuum as a $200 paperweight is not what I need.

I pulled the bearing off the end of the brush roller (it does pop-off fairly easily) and found a lot of fibers and some sticky oil. I cleaned all that off and added a touch of good lube and it has improved it, also quieter. It ran most of the time on the Berber (including on turns) and stopped less often on the medium loop.

I noticed it will run continuously in one direction and stop a couple times in the other (carpet grain difference).

So it is the amount of friction, and maybe the firmware being too picky since surely I shouldn’t be needing to do this like 1 week in already.

Yes, I did the same. There was some pet hair in there binding it up a bit. But even after doing this it still is spinning just a second or two every 5. I do like the design of being able to pull off the end as I’ve had other brushrolls where the hair gets in there and there’s no remedy. However, since it’s still stopping this seems like a deal killer.

Flagged (other) hoping for confirmation if this is a hardware or firmware/software issue. The shipping time alone really cut into the paltry 30 day return window, so I have little time left to make a decision. Really wish to try the next stable firmware, but who knows how many more months that will be.

I also have this problem. Has there been any movement or response from Wyze on this?

This is important and will affect my decision to keep the vacuum or not. It’s not cleaning my carpet nearly as well as my old neato D5.

No. It appears to be a common issue with the base design after looking around and seeing similar models by another brand having a lot of complaints about the brush not rotating on carpet. It is a protection mechanism for the motor and it’s apparently particularly sensitive.

Just saw a way to trick the robot into running while being able to observe the roller from above. You just have to wedge the HEPA filter in place by itself, It has a magnet (the black dot in the corner). I’d go do that and make a video of it, but I feel it won’t change anything.

The reason I got one of the cheapest robovacs was to see if it’s even a thing I wanted to invest in. I really needed a break from my heavy Simplicity upright, so far it is mostly working for me, I never expected it to fully replace manual vacuuming.

I’ve had my robot vacuum for 4 months, with just under 100 hours of runtime. Just recently I noticed it starting to make the same noise mentioned here. Sounds like the brush is pulsing on and off for a few seconds at a time, only while on my Berber carpet. Sounds fine on tile. Still getting quite a bit of dirt, but it definitely doesn’t sound normal.

Friction on Berber carpet does seem to be more than others.

Have you removed & cleaned the bearing, that seemed to help mine even though I only had it for a week. I re-added a touch of Super Lube (liquid in the pen).

I haven’t yet. I’ll give that a try to see if it helps. Thanks!

I’d like to know if that helped. Thanks! (I have a related ticket open and plan to demonstrate the issue when I get a chance)

Glad I found this thread. I bought two and they both do a rhythmic cyclical thrumming sound on carpet. I did capture the sound on video (wireless cam went along for the ride). It does sound like its normal.
I would love to know what’s causing it.
Other than that they are working great so for. Only gotten stuck a couple times. The app needs to send out a louder of different color alert when that happens.

I preordered the robot vac when it was announced and have used it every other day since. It makes the noise only on our plush carpet, not on our berber carpet and not on our ceramic tile floors.

It has made this noise from day one, and has not gotten better or worse. I’m thinking it is normal.

This is after a single use for me. Yeah, once a week is probably not helping. Mostly cat hair I think, we have one cat. This is enough to make the bearing not turn freely and cause erratic brush operation on our berber carpet. I’ve also noticed that the carpet “grain” is enough to make it pulse in one direction, but not the other. 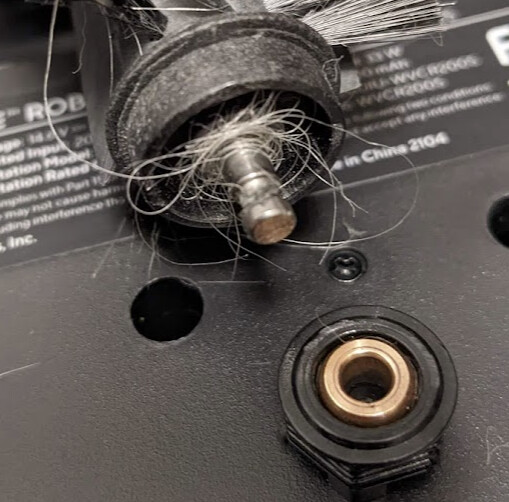 A stick vac that I have used heavily for many years has never had the bearing cleaned. The brush motor is very strong for its size though. It has a de-tangle button that presses a metal blade against the brush, making a lot of noise in the process. 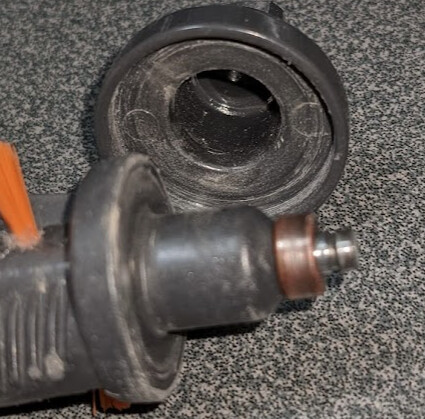 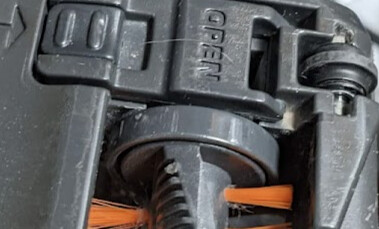 Decided to pop the bearing off while doing my periodic cleaning of the robot vac. I have a dog that sheds so much that some of her hair is still in a cabin in Colorado, and she didn’t go with us. 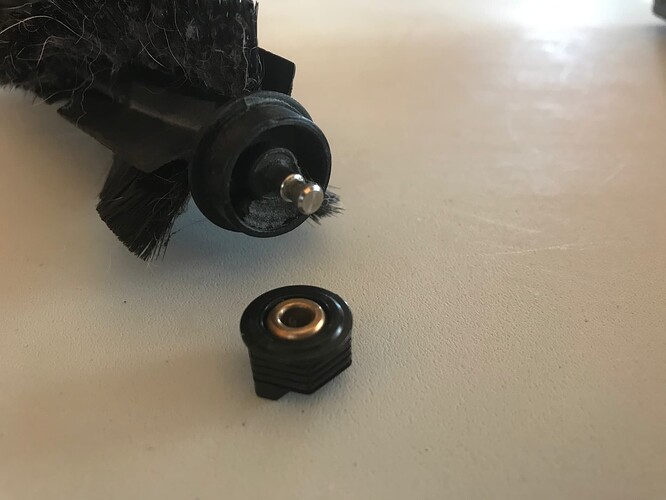 This time I did not pre-clean the small bathroom area with the majority of the long hair with the stick vac. The bearing after this one vacuum run appears to be all long hair (not cat)… 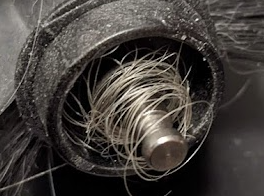 Pretty normal for going a week between runs.

This vacuum builds up a crazy amount of static and it has trouble dissipating it. It would be covered in debris top to bottom and inside (e.g. under the lid). One time it suddenly died while vacuuming – I found the rear contacts touching a metallic corner bead on a wall.

So I coated/wiped-down all surfaces with Reztore ESD Surface & Mat Cleaner which has static dissipative properties.

I coated the charger base also since it was attracting debris that affected charging. (Added 2022-11-04)

The static problem is gone! As a benefit it is also working much better. It is collecting (a lot) more in the bin and I no longer need to vacuum it off every use. The hair tangle in the brush roller has lessened been eliminated (once I coated the entire brush cover-plate, bearing, etc). (Updated 2022-05-18)

When I have issues with charging I clean the contacts with isopropyl alcohol. (Added 2022-11-04)

I notice the same thing on mine, but have not noticed any sort of reduced cleaning ability.