I have a strange (to me) problem…

I have 2 x V3’s both with SD cards (256 Gig) and Cam Plus on both. I bought the larger SD cards to replace the 64 Gig ones I had in them previously, as free space was being used up and overwriting was taking place, (continuous recording) resulting in retained video being limited to about 5 days.

I have now checked with the new cards and as can be seen from the attached images the retained video is now about 7 days with tons of free space available on the cards. 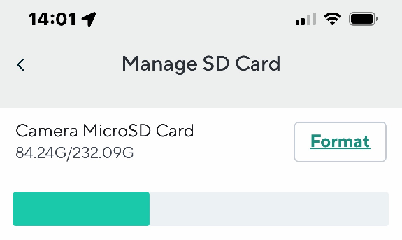 I suspected there was a problem when I checked for the earliest available video a couple of days ago it showed 6th March from 06:00 The 6th and 7th have now been erased/overwritten FYI the new cards were installed around the last week in February.

Is there some sort of restriction being placed on recording to SD cards that I don’t know about? or does anyone have any suggestions on how to investigate and fix please?

None that I know of. I have watched videos on cameras that have VERY little changes (resulting in a smaller file sizes), That went back about 2 weeks. I have 64GB cards in all of my cameras.

I’ll check on some of mine…

Thank you I appreciate it

This example is from a 256GB card installed in a Cam v2 on Feb 28th (17 days) with continuous HD recording. Based off of space used in your screenshot, it appears that you have recorded about 1 week more than my example. I have 2 other 256GB cards installed that have been overwriting between 23-33 days capacity depending on cam type and settings.

The only recommendations I have to offer are make sure your cam’s firmware is current and always perform a low-level format on your card from a computer before installing using the official SD Memory Card Formatter app. Select “Overwrite format”, not “Quick format” and don’t change “CHS format size”. For a 256GB card, this reformat process will take a VERY long time. Also… for very large capacity cards, use the calendar date selection to jump back to an old date instead of tediously swiping the timeline bar to prevent possible video buffer/cache overflow issues:

Seapup I appreciate all the good advice. I will do as suggested with the formatting. I was using the calendar selection to jump around, takes far too long to finger scroll

Out of curiosity, what brand/model of card are you using? I tried SanDisk 256GB and 512GB cards in a v2 and a dashcam a few years ago and found that they had some funky formatting (block size?) that produced size restrictions similar to your issue. Doing a quick format in cam via app and quick format via computer didn’t help as it only wipes the file allocation table instead of rebuilding the entire file system. I blindly low-level reformatted using SD Memory Card Formatter and all has been well since with those 2 cards. I’m now running Samsung PRO Endurance for 64GB and 128GB cards and SAMSUNG EVO Select for 256GB and larger in all of my Wyze cams (about 50 v2, v3 and CP2 cams) and dashcams other than the 2 running the old SanDisk cards.

It will take a while before you hit the card’s limit again, but please let me know how goes.

I am using these
Amazon

Both cards formatted and put back in the cameras - Looking like about 9 Gigs per day. Just remains to be seen if they record and retain more than 7 days.

@Seapup How is SD Memory Card Formatter | SD Association ‘official’? Is it cited by a Wyze manual/article somewhere as being the official formatter?

I am interested to know what specific parameters must be satisfied by a formatter to be official. I use GNU+Linux usually and would like to write a script that offloads video from a card, stitches/uploads, then tests and reformats the card.

The SD Memory Card Formatter was written for and is provided by the SD Association that developed and sets memory card standards.

Interesting. Imagine if there was a ‘hard disk consortium’ and only their sacred formatting tool was the only most gooder way to format a hard drive. Something feels backwards about this.

You can format your SD card however you wish using whichever tool suits your needs. Your chosen format may not work as expected with some apps though.

Hard drives also have formatting standards based on use and platform. Same story… you can format how you please using your choice of tools, but may end up with unexpected results.

Standards are necessary for interoperability.

Sorry to report that the cameras are deleting the day 1 recording when it gets to day 8, Confirmed on both cams. I think I got a couple of 128Gig cards in my Dash cams, going to try those next.

Following a very long chat with support, I am going to create a new thread laying out the problem that I am having (again)

I agree 100%. But standards are not “use this specific program or else who knows what happens”. Standards are "follow the xfat formatting protocol with a header no larger than x and block size of 512 and ascii characters only in filenames, etc.

standards means “use the .html file format” not “use microsoft frontpage” or use “adobe pagebuilder”

Standards specify the process and paramaters, not the tool choice.

I’m starting to experiment and dig into this problem as it’s really irritating to me that I jumped from 64 and 128GB cards to 512 to try to get more reccording time and I’m finding out now when I needed it that it was going to waste.

I was assuming/depending on the ‘format’ function of the app to be able to take a card how ever wackily formatted it was, and RE FORMAT it to the most optional way for the cam.

But I suspect the ‘format’ function in the app doesn’t actually do a format, but just deletes the files. Will do some testing to confirm…

But I suspect the ‘format’ function in the app doesn’t actually do a format, but just deletes the files.

Formatting via Wyze app is a “quick format” that simply wipes FAT resulting in a clean directory table.

I’m not a filesystem kernel module developer, but “wipe” is a somewhat ambiguous term. It could easily be interpreted to mean ‘overwrite with zero’s’. That is what I mean when I ‘wipe’ a drive. A wiped drive, must then be partitioned, and then a partition formatted, to be “usable” again in the traditional sense.

If you overwrite a filesystem metadata area with zero’s (again I’m not a kernel developer, but…) I presume that would be very likely to cause corruption. Would it be more accurate to say the ‘quick format’ in the wyze app overwrites the FAT with an empty table?

Would it be more accurate to say the ‘quick format’ in the wyze app overwrites the FAT with an empty table ?

I can’t see the source code so I can only guess. It rebuilds FAT. You can use a data recovery tool to verify that files are not overwritten as part of most quick format processes.

What are you trying to achieve?

In the grand scheme of things, I’m trying to assemble a hands free process to:
collect all video from a card
process it
post it to youtube
securely erase the contents of the sd card
test the sd card to validate its free of physical defect
and reformat it ready for reuse in another wyzecam.

The bold part is what is relevant to my participation in this thread. How do I turn a blank (zeroed) card, into a state that the wyzecam will use all of it, without using a mouse and my eyeballs and fingers manually.

I have moved the discussion to this thread

As this one is becoming a little unwieldy.