I’ve received my new Rbcior cam, not from Wyze, working fine, and it accepted the same micro SD card I had used in the Wyze cam. I recommend this:
https://www.amazon.ca/gp/product/B09BZG9316/ref=ppx_yo_dt_b_asin_title_o00_s00?ie=UTF8&psc=1

[Mod Note]: Your post and associated replies were moved to create this new topic as your subject matter is a departure from the original Wyze News announcement. Please avoid diverting a topic by changing it midstream.

Well, if you want a not-Wyze alternative, I think the best option (please not the “I think” part

They are made by Anker, which “I think”

is a renowned brand.

I have 3 Eufy “fixed” and one “Pan”. I tested them, they worked Ok, but I still think Wyze is way better in terms of functionality. I use Wyze as my “main cameras” (I pay the Cam Plus), and have the Eufys turned off as a backup . But if you want something not-Wyze, maybe you can consider this cameras. They also have a 1080p version (of the fixed and Pan cameras) that have all the same features but are a little bit cheaper.

Thanks. What kind of notification speeds do you get for person detection on your Eufys? The only other “con” for me would be a lack of Alexa person announcements.

The Rbcior works with Alexa and google, apparently, but I don’t have either so I haven’t tried that personally.

One problem, it’s working as advertised, easy install, and accepted the same micro SD card that I had for my Wyze cam, but although it is recording non-stop, and detecting motion events, it records only a screenshot for each event, not the “short video” promised in the specs on Amazon. But the full video is there if I go to that time. I’ve emailed support but of course have not heard back yet.

Delivery of notification takes from 5 mins to 30 mins. for Eufy.

Do you know if Eufy ever fixed/upgraded the software so you can view the stream from more than one device on the same account at once? I had bought one of the 2K cameras to test back before Wyze released the V3 and really liked the video. However, for my use, I need to be able to display live video on more than one device logged in at the same time, so that was a deal breaker at the time. I could do it with something like TinyCam, but I needed the app functions.

Delivery of notification takes from 5 mins to 30 mins. for Eufy

Minutes? Is that a typo?

The Rbcior notifies within 1-2 seconds, which is faster than Wyze - sometimes Wyze was within a few seconds but sometimes took up to 3-5 minutes!

The Rbcior 1080P Model LF-C2t also has another feature better than Wyze, which is that it can be set to record video only for events, instead of continuously, and when it records one event (for about 12 seconds) it does NOT (as Wyze did) time out for 5 minutes. The Rbcior will record another event just a few seconds later. Recording this way, it’s not using much space on the card, so it should be able to retain events going back weeks instead of only a few days. And, when I view playback, it jumps automatically from one event to the next. I can also choose to jump ahead or back. Altogether better than Wyze. No answer yet re/ whether the event notifications can include video or not - currently they just have a screenshot. But Rbcior did answer me - they just misunderstood my question.

Glad it’s fast but it seems like just another camera? No person detection or AI at all, no starlight sensor, only 1080p, etc. There are dozens of similar brands.

It offers person detection but I don’t need it, so turned it off. It has IR night vision, as did the Wyze. What is a “starlight sensor”? (My Wyze cam didn’t have that, either.) I think dozens of brands might be an exaggeration, but even if not, why is that relevant?

I had a working Wyze cam until Wyze deliberately bricked it with a firmware update. This was the easiest, least expensive alternative I could find. I thought the info might be useful to others here who are in the same situation and getting no help from Wyze.

Okay thanks. I had read through your linked Amazon page twice and didn’t see a word about person detection. I just did it a third time. One review mentions human detection.

Starlight sensors are low light color sensors (color in near darkness) used by Wyze V3 and some other cameras.

I don’t think dozens is an exaggeration. I’ve been exposed to at least 20 brands without even trying. It’s relevant because it means a recommended camera should have something to stand out, whether in features or reliability or price or support etc. I’m glad you are having good luck with yours.

My Eufy behaves slowly after 2 or 3 App updates ago.

I think the main issue here remains that Wyze deliberately bricked cams that had been working perfectly. Mine (V2) was only 17 months old and some users reported V3 cams stopping working. Talk about strangling the baby in the crib. Terrible conduct by Wyze. And they hived off this separate forum about other cams because they don’t want Wyze customers seeing how they really act.

@rwarburton I’m sorry to hear that you had a camera bricked by a firmware update. If you worked with Customer Support (206) 339-9646 Monday - Friday 5 am - 6 pm PT and Saturday 8 am - 4 pm PT on this and did not get a satisfactory resolution, please post your ticket number here and one of our volunteer moderators will attempt to get your case escalated.

Hi, I have a Wyze Pan V2 and a Eufy Pan side by side (see picture). I turned both cameras on, opened the street door and walked into the room. After about 3 - 5 seconds, I got notifications of “person detected” on my phone (conected to the LTE network, I was not connected to my home’s Wi-Fi) from both apps, Wyze and Eufy.

That said, I have to say that historically, a few times I had longer notification delays, sometimes even 5 minutes or more, both from Eufy and Wyze. But it’s impossible to know who to blame: my home’s internet connection, the company’s servers, my phone’s data connection… 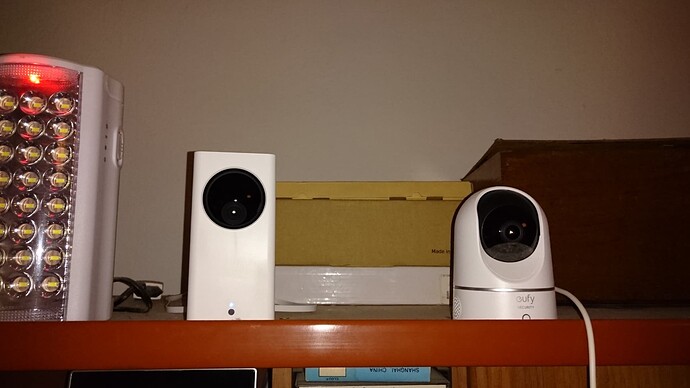 PS: Note how the Wyze’s lenses can tilt lower than Eufy’s. And Eufy is on its lowest position; Wyze still can go lower.

Another interesting thing: when you turn off the Eufy Pan camera, it rotates the lenses to the back, and I mean, TO THE BACK, until they get under the white plastic area on top of the camera, and the camera gets “blinded”.

On the Wyze vs. other brands subject, I think there’s another couple of things you must take into account:

After about 3 - 5 seconds, I got notifications of “person detected” on my phone (conected to the LTE network, I was not connected to my home’s Wi-Fi) from both apps, Wyze and Eufy.

I normally have push notifications turned off, but I turned it on to check since I was curious. I walked out my side door where there is a V3 camera and I got a person detected push notification in 6 seconds from the time my first step out the door hit the deck.

Yes. I first got a Sound notification (for the noise I made unlocking the door) and a couple seconds later a Person notification. All times are approximations, I didn’t use a chronometer

but it wasn’t neither 1 second, nor 10.
The camera is indoors, and when you enter through the door, you are clearly visible to the camera and 8 - 11 feet away from it. I intentionally placed the camera in a position that makes it very easy for the AI to recognize a person coming into the room… I also didn’t try to hide from the camera, I just unlocked the door and immediately entered the house normally, as I do every day. But, the camera is pointing “to the front”, and the door is about 45º to the left. I wasn’t directly in front of the camera.
(Ah, if I just got a dollar for each time I said “camera”…

My ticket # was 1724197. I posted about it in the original forum. They offered me $20 - not good enough when the firmware update was the cause.