So, what exactly is this security reason that makes it so important to take this risk?

I do not know the exact security reason, I just know it is due to security

If there is another reason for forcing the update, what is it?

It is for needed security updates

And how stable are the latest App and firmware versions?

I can only speak from personal experience, I am on the latest app and it is working fine, I have updated all my products so far with the exception of my 3 WOC base stations and 6 WOC. I will be doing those this weekend. I have had no issues with bulbs, plugs, v2/v3 cams and pan v1/pan v2 cams. I did have 2 v3 cams that failed on the first update but took it when I tried again. I will update this post if you like after I do my WOC base stations and WOC cams.

Ok, thanks Jason.
I’ll cross my fingers and toes and hope for the best.

I don’t like it when companies hide the contents of updates by saying something vague like “security”. It doesn’t fill me with confidence. In fact, it makes me think they are pushing software that will spy on me.

When Synology do an update, they go into precise detail about every security flaw they addressed. Such as:
“Updated the OpenSSL setting in response to new rules of Let’s Encrypt certificates.”

I like that. I respect that.
“Just do it” doesn’t give me the same fuzzy feeling.

But it looks like we’re not being given a choice. See what happens. I’m remembering why I’ve not visited these forums for so long

Now that I think of it, when did this push to do the updates all kick off? Is it related to the log4j identity hacks revealed on 9 December?

when did this push to do the updates all kick off?

I believe the actual push started last summer, maybe around June, it seems to have just reached a point where they are now ‘forcing’ it.

This update bricked working cams! And Wyze has just cut those customers off! See my other posts in this forum, and in the hived-off Rbcior forum:

I’ve received my new Rbcior cam, not from Wyze, working fine, and it accepted the same micro SD card I had used in the Wyze cam. I recommend this: [Mod Note]: Your post and associated replies were moved to create this new topic as your subject matter is a departure from the original Wyze News announcement. Please avoid diverting a topic by changing it midstream.

I had a 2019 Wyze cam 2, working perfectly, bricked after doing the mandatory update. Support (ticket 1724197) offered me a $20 credit saying they owed me nothing, because my cam was off warranty, when their mandatory update bricked my cam! I have a better replacement, from Rbcior. I’m lucky because I had only one Wyze cam, easily replaced. You folks with multiple devices are not so lucky. I can only suggest you keep nagging Wyze to step up and to the right thing - replace every bricked device with the newer equivalent.

Here’s hoping Wyze steps up with replacements for all bricked devices - so far they are just dodging the issue and offering nothing.

See my other posts in this forum. I don’t think this is related to log4j but you should not trust Wyze after they bricked cams.

Grand. I don’t want to be without the cameras this weekend so I’ll try the updates next week and see how it goes, leaving my most important camera to last.

I just received a pop-up notice on the app telling me to update my cameras to current firmware. My problem: all but three are running current versions of RTSP firmware. The other three have the most recent firmware according to the app.

Does this imply Wyze will no longer support or allow use of the RTSP firmware?

We just confirmed that RTSP firmware will not be forcibly upgraded. I suspect the blanket notice wasn’t so discriminatory.

I’ll try the updates next week and see how it goes, leaving my most important camera to last.

That is the good way to do it, I personally update mine one at a time and I will do a few of the less important one and run them a day or two to see if any issues arise before moving on to the critical ones.

We just confirmed that RTSP firmware will not be forcibly upgraded.

Good to know. However, you may see many angry/frustrated posts about this since it is indiscriminate. It certainly caught me by surprise.

I understand the Wyze V3 camera is meant for outdoor use per your website: 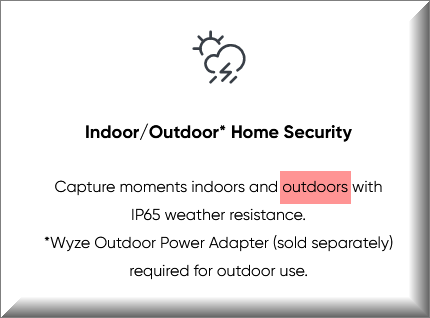 But, the updated Terms of Service state the WCO is the only outdoor device ? 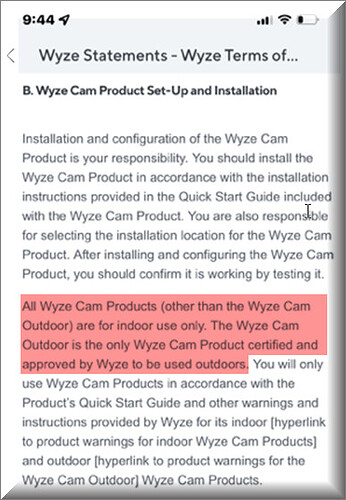 Please clarify the disparity between these two statements.

@WyzeJasonJ perhaps you an ask the power’s that be at Wyze for clarification on this?

I need to know if using a device outside, such as a V3, is voiding my warranty.

@nixhome2020
I have pointed this out to Wyze, I am hoping the get it corrected soon, my understanding (not official statement by Wyze) is that the v3 is fine to use outdoors but the power adapter that comes with it is not meant for outdoor use. I agree this needs corrected in the ToS.

I have pointed this out to Wyze, I am hoping the get it corrected soon, my understanding (not official statement by Wyze) is that the v3 is fine to use outdoors but the power adapter that comes with it is not meant for outdoor use. I agree this needs corrected in the ToS.

Yes, I understand the power adapters are not out door rated, so they sit in a Weatherproof Receptacle Cover: 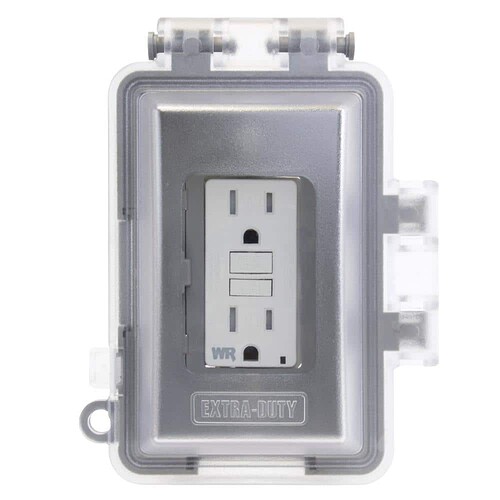 Commercial Electric non-metallic while-in-use device covers provide weatherproof protection when an outlet is in use. While-in-use covers are made from high-impact polycarbonate construction providing

There are other Wyze items besides the V3 that can be used Outdoors, that should be addressed as well.

You are referencing the web version of the Supplemental Terms published May 15, 2020… before the advent of the v3 and other outdoor products. Yes, this needs to be updated to include/exclude the latest products.

Providing an update…
I updated my v2 and v3 cameras today.
As my app is also old, as soon as I updated the firmware, the cameras wouldn’t connect. So I continued blind until all camera firmwares were updated.
Then I updated the app, reconnected and finished the firmware upgrades.
All cameras are working.
Happy days.

Time will tell if the notifications are working ok.

Also my tinyCam Free stopped connecting to the cameras but it works again after updating the tinyCam Monitor app.

Just curious, are you using an iPhone or Android? My cam2 remains bricked. I had updated the iPhone app first, then the firmware, and it immediately stopped working, never to respond again even after full reset. Now replaced with Rbcior 1080P which is working fine.

I’m using Android 11.
2 v2 cameras.
I knew the app wouldn’t see the camera once I updated the firmware so I just hoped for the best.
There’s a way to flash the firmware from an SD card (but it needs to be a small size). It’s been a while since I had to use that way.