Question for the WYZE employees. How much power does the V3 Cam need to connect to WiFi successfully? Not the amount of power to run the cam. I think there might be two power requirements for the camera: 1) for a fully functioning camera with WiFi. 2) power for the camera to run and record to the SD Card but not connect to WiFI. Can a Wyze engineer confirm this for me? Thanks.

I think all of them can be accommodated within half an amp (0.5A), which is certainly below the 1.0A adapter supplied.

Reason I ask is I am seeing an issue of the V3 camera not connecting to my WiFi randomly throughout the day. Use to only happen once or twice a month, but seems since the last firmware upgrade, I see it multiple times a day. Now this camera is ran off of solar power and rechargeable battery packs. I am thinking the power supplied to the camera is not a constant voltage, therefore the camera drops the WiFi connection. I still have video on the SD Card but I am unable to access the camera via the app. I have changed cameras in this location and the problem stays at the location, not with the camera. Tomorrow I plan on testing the battery packs and making sure they are still fully functional.

I think you are on the right track.

I don’t know if you have a USB voltage & current monitor, but the last solar panel I hooked up went nuts when the sun wasn’t direct. It flipped between 5V and 0V repeatedly, for a long time.

Compounding this was a battery bank that went nuts when the input charging voltage changed.

I own a couple battery banks, and they both transition the output to zero whenever the input changes. That would kill your cam. Trick is finding one that doesn’t. Just saying they have ‘pass-thru charging’ is not enough. They need to keep that output up at all times, and no one explicitly says that.

So IMO the best thing you can do is test the voltage to the camera in your situation using a USB voltage monitor.

I bought this 2 years ago, but there may be something better now:

This is the one I use 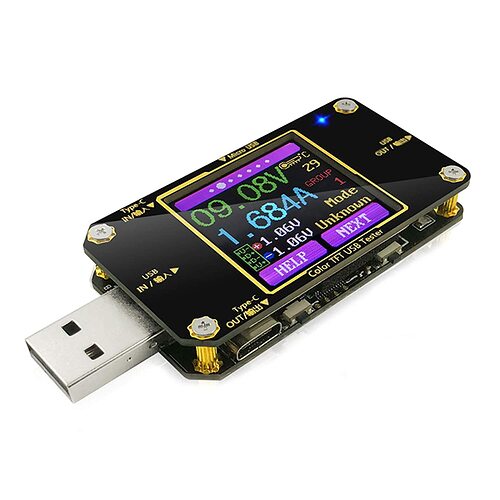 v3 with spotlight off

v3 with spotlight on

Don’t want to measure with the siren. Wife and dog would object.

Thank you for the input. I will say after pulling the SD card today, I need to correct what I had posted. The camera does not keep recording, so I am going with my power is dropping randomly and the camera actually turns off. I do plan on buy one of the USB voltage monitors. Does anyone know if any of them work with Home Assistant, as it would be nice to have it graph via Grafana or some other visual dashboard.

See Wyze, I am good at troubleshooting and you should pick me for one of your hardware tests.

I used a 6W solar panel with a 7aH 6v gelcell battery to power a V3. It works fine day and night as long as we don’t get two cloudy days in a row. Otherwise they die and sometimes need to be power cycled when the battery is charged back up This defeats the goal of using it in a remote location (at an AM tower site where I can’t use wires or they pick up high RF current). I measured the current draw of the V3 and it’s about 340 mA, similar to what others reported. I tried the outdoor cam but the base signal is low for this setup and I can’t leave it connected continuously to the solar panel. I really don’t want to remember to charge these up every few weeks. I’m running out of ideas for using Wyze. I think the Blink cams will work with the solar/battery so I may have to go with those. Any ideas?

I am using a 50W solar panel that hooks to a USB Solar Panel adapter from Cutting Edge that charges two 16750mAh USB power banks. I hadn’t had an issue until the last few weeks. I think the main issue is how to properly charge two power banks (they are pass-through, but as Newshound said, they need to keep the output at a constant rate) at the same time but also just use the power from the solar panel during the day. I’m not backward powering the panel, I have tested this by unhooking the panel from the Cutting Edge USB adapter and leaving the power banks connected to the adapter. There is a small fan in the adapter that runs when there is power from a panel but it does not run when the USB power banks are connected.

I think I am going to dump the USB rechargeable power banks and go with a higher capacity standard use battery.

I think if you went with a higher watt solar panel you would solve your issue. I worked with a friend who does home solar and he said 50W was the lowest I could go to charge the batteries and the camera during the day.

V3 with IR illumination On, Siren On, and viewing live video Current Draw about 0.5 Amps
With above current data it appears spotlight draws about 0.1 Amps, so max is Approximately 0.6 Amps

wyze stated they are working on solar for the outdoor cam in an AMA but no word on release info yet.

I have yet to find a good power bank that will accept a charge at the same time something is connected to the output. By design, my Ravpower 30000 power bank shuts off the output when it is being charged. Understandable, because if you have a means of charging the power bank, you could use that means to power the device. Legal issues also.

Ravpower is what I’m using. They are pass through, so my thought was it would allow the “solar power” to pass through but charge also the Powerbank. But if what you saying is true with my Powerbanks, then it explains why I have no issues for a month or so and then the Powerbanks are too low on a charge and I experience the random on/off of the camera. I sent Ravpower an email asking for clarification on the model I’m using.

I have 2 cameras that are too far from A.C. power source, so I put in 2x 100Watt panels and a MPPT charge controller connected to a 100Ah 12volt battery.

I had to go with 2 panels and large battery due to lack of sun as I am in a forest, I get about 3-4 hours of good sun in winter and one panel wouldn’t support the 2 cameras and LED motion triggered floodlight at times during the short daylight months of winter. In the summer I had no problem with one panel and had excess power.

Thanks for all the replies. I can see that I was trying to keep the panel too small. In my testing, I found that it only could charge the batteries very slowly with mid-day sunlight so it was not adequate with less than ideal conditions. I didn’t test the current draw with all the features running. I really prefer the V3 over the outdoor cams so far for features and ability so I may just buy bigger solar panels and batteries.

I think the real problem here is that you’re trying to use a power bank as an UPS. Maybe you should consider something like this instead:

I can power two Wyze V2 for 10 hours with this one. Both are installed outdoors, they are constantly detecting motion and uploading videos (I don’t have CamPlus, “constantly” means a 12 second video every 5 minutes). I guess it should be able to power a single V3 for 20 hs… probably

I think it’s more expansive than a power bank, and this particular model is “overkill” for your needs (you are paying for the power adapter, several cables and adaptors, and the possibility to output 5V USB but also 5, 9 and 12 V via the (round connectors that right now I don’t remember if they are 5.5 x 2.1 or 5.5 x 2.5 mm but if you want I can check it

). But maybe you can find another model that better suits your needs.

I own and have tested this particular model, and can tell you that works as it should. In fact, I have 2 units of this model, and 2 other different models, and this one is, overall, the best (even when I use a different one for my router and ONT because it has almost 3+ more capacity).

A UPS would have to be weather proof and charged by the sun. I cannot run any wires. I just need a large enough solar panel wattage and battery.

I have all my equipment in a weather proof box. It has done perfectly through the Colorado winter, including our 22" blizzard in March.

I assumed that your power bank was not weatherproof, so you should have it protected in a way that you can also use for the UPS

@tomvangorkom I re-read the posts and realized you have asked a question six days ago. Sorry, I was answering the original post by Colorado_Guy, not your question…

Regarding your question, can’t you use a bigger solar panel and battery? Or, could you use wires and shield them with some metal shield connected to ground? Or use STP (Shielded Twisted Pair)? Maybe even coaxial cable? Or install a wire mesh between the antenna and the camera? Or something like this: