I have a Wyze cam on my porch so I know if a Porch Pirate shows up (rural area so none so far), but that is a reactionary scenario. It would be great to have an actually preventative measure in place.

I am thinking of something along the lines of these:
https://www.theporchpod.com/
https://www.porchpiratelockbox.com/

Secure my packages in Bench Box. Protect your porch from Porch Pirates.

Most porch pirates are criminals of convenience in the sense it’s super easy to “see package / take package”. Most of them will not “work” to commit the crime.

If this was something that had some “Smart” features to it such as notification when the status changes from open or closed/locked I think that would be helpful. I’m sure there are other useful features that could be included.

Might be just as good keeping any box on the porch for deliveries. As long as a package is out of sight, it won’t be an easy target.

No. These are dumb. Delivery people won’t use them. Waiting and codes and unlocking and unfamiliarity and failures. No one has that kind of time. I do like the plain old box idea though, even labeled “deliveries” to avoid any confusion. 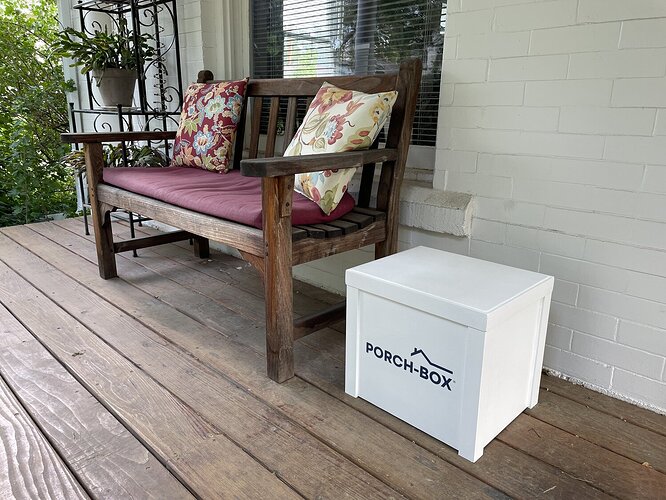 Porch Box is like no other home delivery box. Each box is built just like your home: Solid wood structure and impervious engineered siding. Whatever punishment the exterior your home can survive, so can our boxes. Pick a standard box, or design...

To be fair, I’m not actually thinking of something that necessarily needs to be locked. More or less a box, with a lid, that has a sensor that can alert the Wyze customer that the lid has been opened/closed. Perhaps include a camera in the lid so that in the event a pirate does open the box, the camera should get a clean shot of the persons face.

Okay that much makes sense, sure. I just don’t want to add friction to an already cumbersome situation for the driver and consumer. Lots of people have rigged that sort of thing for their mailboxes already.

I don’t even mind a feature that could arbitrarily lock the box on command after a delivery. If a a subsequent deliverer encounters a locked box they can just leave the package outside and the locked box is “your fault”.

I agree, any attempted solution needs to not interfere with the simple logic of dropping a package at the door. Many of the solutions thus far that I have seen are overly complicated and require too much interaction with the delivery person.

Some additional marketing benefits would be that it keeps packages protected from the elements as well.

A simple product like we have described thus far would be cheap enough to mass produce and offer a very high margin for Wyze.

A lot of people have v2 cameras that are not used.
Wyze could sell a box that you place these V2 cameras into that aims outwards with the intent of being used for holding packages which arrive in the mail.

The only requirements would be a box that opens and closes, with a slot for a camera to be placed
None of the V2 limitations would matter with this product, or a V3 could then be used to train the A.I for detecting packages better.

It wouldn’t even be hard to make this product just find a box that works well.

Another good idea lingering around.

It would be great to have a larger, weatherproof version of the gun safe for use outside as a secure box for deliveries.

[Mod Note]: Your request was merged to this topic for consistency in grouping similar requests. Please remember to scroll up to the top and click the VOTE button. You may also wish to comment on and/or vote for Medium and full size security safe.