I need a wi-fi enabled plug/receptacle that will not need constant babysitting. It will be used some 600 Km away from home and hard resetting is not an option. It needs to be able to reconnect after power failure.

Is Wyze Plug up to the task or should I look for something else?

I would try another brand given your requirements. You could consider YoLink. I’ve never had any problem with their devices coming back online after a power outage.

I have four Wyze outlets, and I have four from another brand. The other brand are far more reliable in my opinion. 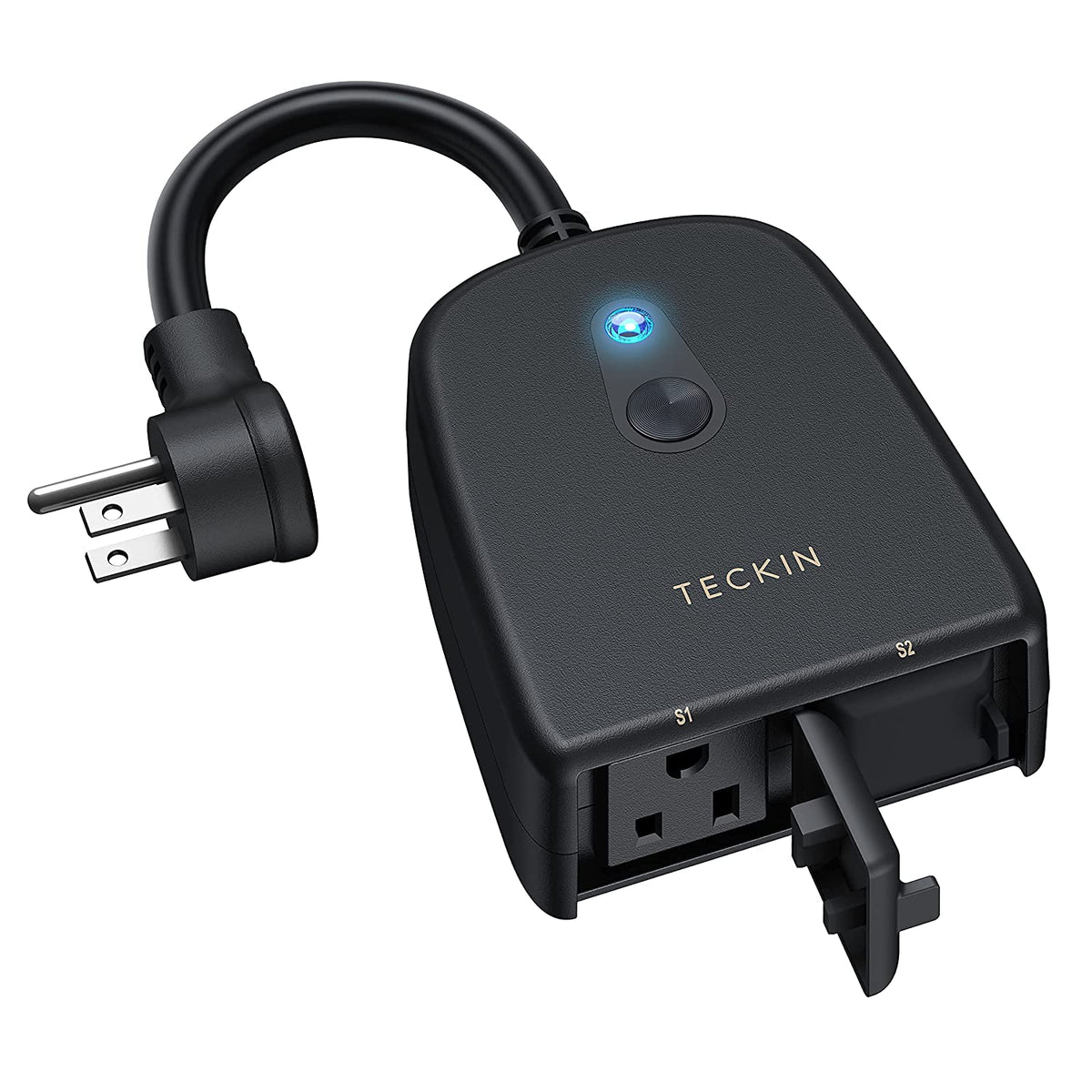 Set up with Smart Life1. Search for the"Smart Life" on the App Store or Google Play. You can also scan the QR code in our User Manual provided.2. Register/Login to the App using your phone number or email address. A verification code will be sent if...

Do you have the indoor or outdoor plugs, or both? I see they’re not available on Amazon and manufacturers reviews are all five stars. Makes me a bit suspicious. I’d rather take you word for it.

I have the outdoor outlets. Same concept as the Wyze Outdoor plugs. I also noticed that they are no longer on Amazon (although that is where I bought mine).

No, I would not recommend something that you can’t simply unplug from power and plug back in. This would require a more complicated approach to ‘turn off’ (remove power).

I agree with @K6CCC. I have three other flavors besides Wyze that are more reliable. I only use the Wyze plugs with the Wyze cameras, because they show up in the app next to my cameras. Easy for me to power off and back on. But when they need to have power removed, I can climb the stairs to do that.

And @Victor, is also right. Yolink makes an excellent plug. But connects to their hub that you need too.

I have had best luck with Sonoff’s S31 plug. About the same price as Wyze, less than Yolink, and don’t use a hub. I have a couple of power bricks plugged into the Sonoff S31’s that are powering more than one Wyze Camera. As with most plugs these days, you can set the default power setting to On/Off/Last State, so gives you the freedom to set it to do what you want, when building loses power. And you can create a schedule to have it turn itself off and back on, and the plug follows the schedule even if the router loses power. Could put that router on a S31 and it will power down and back up the router if need be. Tried it, it works.

The really good thing about putting a router on a wifi plug to power down and back up allows us to purge all those left over residue bytes that dribble out the ends of wired network cables randomly. Years ago, 30+, we used to all agree to turn off the Internet for 1 minute, 1 day of 1 specific month, each year to let all the excess bytes left behind on data packet headers. Of course back in those days, there were no DNS servers, we used a system called root-servers. And there was only about a hundred places that had Internet anyway. You are going to think I am making this up, but that day we turned stuff off was really 1 April. Really. (Not.)

Sigh, such a common mistake. None of that maintenance was ever necessary so long as you followed the spec.

I chose not to use Wyze plugs after hearing about the initial power restart issues and later the firmware \offline issues. The size of the plug was also an issue for me. Based on the recent and current unreliability of remote access to Wyze IoT thru their ever-changing App UI, Firmware Bugs, and Cloud problems, it was probably a good decision for me.

I chose the Amysen Smart Plugs (16 so far). I have had near flawless uptime, great remote power cycle, all auto connect after a power loss (I have my WiFi and Fiber AP\Gateway on UPS) and they are Assistant compatible. Quite cost friendly too.

I too have some of that general type plug. Mine are gosund. But I think one or two companies makes all of them. What app does Amysen use?

Here’s an idea that you might want to try. The eWelink app (that works with many manufacturers just like Smartlife does) has a version now that supports NFC Tags. If you are inclined to, you and can use eWelink, you can create a “Scene” like a rule and trigger it with a NFC tag. NFC Tags are fun. You can stick them on most non-metal places. I can open my garage door by swiping my iPhone at the wall switch. I made a tag for the door, and hid the NFC tag inside the wall switch cover plate then attached it back. Sneaky.

I reboot my router/modem at least once a month. Creature of habit I guess. Do you think the S31 will fit in a weatherproof receptacle cover like this one:

Amysen looks promising, but they are out of stock for now.

You guys and this forum rocks. Keep the suggestions coming,

They have several different styles in white and black with different LED colors. If you look thru their Amazon store, there are several available for Prime delivery. One is on sale 4 for $19

This is what I am doing now. I made this and it fits. This is a Sonoff Basic. With RF capability. I use them lots of places. Love being able to use a 8 button RF Remote to consolidate a bunch of 433 remotes together.

Note that it does not have a ground lug. I just replaced the $80 fish pond pump and don’t want to cut the third/ground lug off the plug. So, I have ordered a short extension order and will cut the female end off to use on output side. (Could/might use male end too, and run grounding wire along outside of “Basic” and separately connect the grounding of male and female to be safer. ) But maybe not, because I need that flat male end to make it all fit. fortunately, I don’t have a mission for the left over male 3-prong plug and can try it. 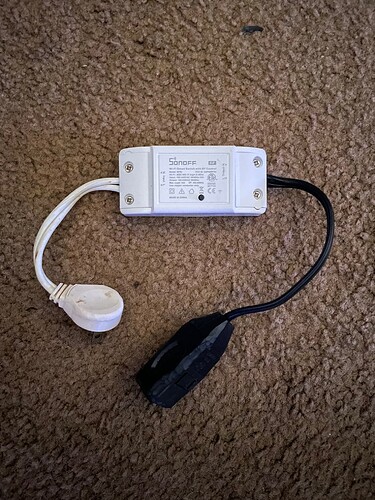 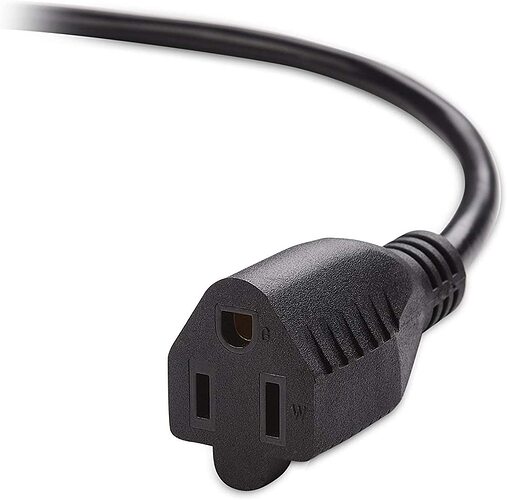 I have some Gosund round wifi plugs. They have no firmware features. Not even Power-on state choice.

But the S31 has that LAN Control, for when Internet is down, Push notification choices, Logs, Network Indicator choices, Power-On State (on/off/last state), Inching (we don’t really need that on a plug, but its there), power usage collection, & you can put your kWh rate in, OPS settings for a) Min power, b) max power, c) voltage, d) current, and WiFi, so you can see/change the SSID and password without adding it back to your net. I use a fraction of all that stuff, but its there.

Pardon my ignorance, but will I be able to turn the Sonoff Basic on/off 600 KM away with my iPhone?

Never mind my stupid question. I just saw it on Amazon

Liking the S31 value added features you listed. Will definitely need to look at some of these! For the price, with all those features, very competitive. Thx!