Please Help!!! My Wyze Robot Vacuum I think has a drinking problem! As of lately she has become delusional and is seeing double by adding to the map. She seems to add rooms on the left and the right.
NOW she is also getting lazy! Not only is she trying to go to rooms that do not exist but has only done the perimeter of the living room. This morning she tried to lie to me saying she was done and going home. I noticed because she was lost wondering the house and turning in one spot. When I looked at the map I found that she only did the perimeter of the living room but also shows she did the perimeter of a nonexistent room!!!
HELP!!!

I am having the same problems. So I reset the map but could not separate into rooms.

I had the same problem. I added a virtual wall it solved the problem. Than It self corrected after another clean. Did not happen since.

Hi @Atom661 - sorry you are having this issue! The first thing I would suggest is to make sure you have updated both your app and the firmware in the robot vacuum itself.
Firmware can be checked from the Device Screen/ Settings/ Device InfoFirmware Update. if you are up to date I would then suggest resetting the map and starting a new clean to let the vacuum create a new map entirely.

Both phone and app are updated to latest versions. Have reset the map several times but keeps doing it. You guys have a problem and it just cost you as sell. I was looking to get 2 more for gifts but will go with someone else since you can not address or fix issue.

My vacuum keeps running around the house remapping it.
Now it doesn’t start cleaning per the schedule, like it doesn’t recognize the rooms that I created.

So, as an update,
I did check and software IS/WAS up to date. I cleared the map and told her to map the house. The vacuum failed to map the house… It mapped the kitchen then went back to its base thinking it was done. So I cleared the map again and just sent it out blind to clean. It did clean the house and map it like it should. (I did have the kids rooms and office doors closed)
So far as of today it cleaned like it should.
Unfortunately it seems like it will be just a matter if time before it will go on another drunken escapade again.
I do notice that EVERY TIME it maps, it tries to add a portion of the patio from the sliding glass door in the master bedroom, then I have to add a “Virtual Wall”
I hope the software will be fixed soon…

Once again, my Vacuum has fallen off the wagon. I did as suggested and all software is up to date and she was remapped once again… I’m definitely not sure on the next rehab that is needed at this point.
Maybe she should sit in the corner for a while as I introduce a more reliable counterpart. Maybe she will get jealous and decide that she should not indulge as much.
We are at a loss and very sad for her when we watch her make up lies and stumble all around the house trying to find her way home.
Attached is her new map… HOWEVER, I do like the diagonal lines she decided to do on the living room carpet.
PLEASE HELP MY DRUNKEN DROID!!! 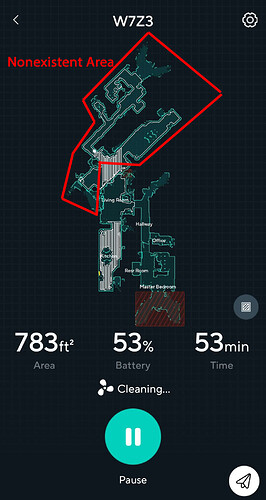 As much as I like my robot, his software is just not performing. Keeps forgetting hot to clean a room, he just dances around the perimeter and goes home.
He also doesn’t respect room lines and virtual walls. When I ask him to clean a room sometimes he just goes to any room he wants.
I’m going to try to remap again and hope for the best.

My robot is having the same issue. If it is mapping and cleaning it never messes up. When cleaning to the saved map it will loose its position on the map and start picking up new ghost rooms on the map at an angle to the real rooms. Trying to decide if this is a sensors issue with my robot and i should return or if they will be able to fix this with a software update.

There is a new FW being tested at this time. Those of us in the beta Test Group, which you can join, have installed the latest FW to see how the mapping and problems experienced are behaving now.

you can join the beta group, if you want, by going to: Become a Beta Tester – Wyze

you can see what the beta FW will provide by going here: Wyze Robot Vacuum Firmware Beta Testing 3/22/2021

And here is a good forum about the WYze Vacuum and the updated FW. This was provided by the Wyze Team: About Wyze Robot Vacuum Firmware 1.6.113

Any updates on the beta software? Does it actually fix anything?

Yes. Definitely fixes the drunk driving that led to creation of ghost rooms.

I loaded the beta firmware two days ago. The robot completed the whole house yesterday for the first time without getting lost (drunk). Today it just finished half the house and made it back to the charger without any issues. Hopping this new trend continues!