Motion Sensor Light Triggering when camera is mounted above it

I have a motion sensor light over my garage door that has a IR triggered motion sensor. For 5 days I didn’t have my camera plugged in, (which I have mounted directly over the light). For those 5 days the light didn’t come on unless a physical object moved in front of it. I plugged the camera back in and every few minutes or whenever the light was ready it would turn on. This happened all night, on off, on off, back and forth.

I know its the camera thats causing this because before the 5 days it was doing this, so i removed the camera for a test period. This is the best place to put a camera at my house and i like the motion lights so i’d like to keep them.

I think it has something to do with the IR or something the camera puts out that the light is tripping on. Some facts
Motion sensor light is very basic and does not respond to sound. The sensor part looks over the driveway and the camera does the same. I tried turning night vision off, and motion capture off. I do have it set to record continuously to a installed sd card. Nothing seems to work.

More testing: When the lights first came on i waited for them to go off and then opened the app, as soon as the camera connected the lights went on. I don’t understand how the camera operates, but I assume that its broadcasting IR and the IR receiver on the motion light is picking that up.

Any help would be great. Thanks.

How close is your camera mounted to the light? Can you move it further away to test what a safe distance might be?

Your motion-triggered garage light uses a technology known as PIR (passive infrared). The light unit contains a PIR detector which is responsive to IR energy coming from moving objects in its field of view. IR is basically heat, so the garage light is triggered when the PIR detector ‘sees’ a warm body in front if it. The PIR detector needs to be pretty sensitive so that it can detect the weak IR radiation coming off a warm body dozens of feet away.

The Wyze camera has a number of IR emitters blasting out a lot of IR energy when it’s in night mode. The Wyze camera sensor is responsive to IR wavelengths, and thus can ‘see in the dark’, thanks to the IR illumination.

The PIR detector is probably hidden behind a translucent white plastic cover on the front of the motion light. The cover might be molded with some ridges and grooves so that it functions as a sort of ‘wide-angle’ lens at IR wavelengths. You could try masking a portion of the cover (the part nearest to the camera) with some electrical tape. That might reduce the amount of the camera’s IR that’s getting into the PIR. But it will also reduce the sensitivity of the motion lights.

My only other thought (especially in view of your “more testing”) is that if the camera is right upon the light sensor, you could be dealing with electromagnetic interference. The solution would be to move the camera a bit further away.

Thank you everyone for your responses. I’m including a picture of how I have it mounted. Additionally during testing I disabled night mode and it still tripped the motion light. 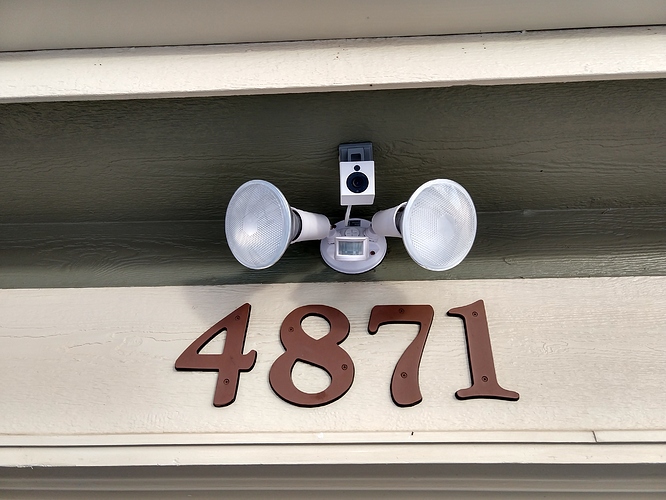 I do have detection area enabled. I’m going to disable that tonight and see if that helps

Considering how close those are mounted, I would agree with @Loki that you’re getting electromagnetic interference. The camera is a transmitter (wifi), so you’re blasting what ever is near it.

I agree with you guys and thanks for help. I tried to turn motion capture off but that didn’t help. I then turned it off via the app and the light stopped. So I’ll look at moving it away.

Let us know the results.

@joshherman,
It does sound like the interference is EMI (not IR) from the camera interfering with the motion-detect lights. As OverWatch indicated, the camera is a WiFi transmitter. It’s plausible that the WiFi signals (in the 2.4 GHz band) are the culprit, though the electronics in the camera will be radiating at various other frequencies.

Here’s something you could try - change the WiFi channel used by your WiFi access point. Most consumer routers/APs have an option to let you manually select the channel (between 1 and 11) to be used. It’s a long shot, but a small change in the frequency emitted by the camera might reduce the RFI impact on the lights.

Another source of nearby EMI is the Wyze USB power supply, which I suspect is located very close to the motion-detect light. These types of power supplies are notorious for generating spurious RF signals. You could try swapping the Wzye supply with another (any standard USB power supply capable of 0.5A should work). Or temporarily relocate the USB supply and get it as far away from the lights as possible. Another test - if you happen to have a USB battery power pack, use it to power the camera temporarily and see if the lights quit acting up.

I am having this exact problem. My cam is less than 1 foot away. I’ve tried it with the IR disabled and the same thing happens. Guessing it’s the electromagnetic interference issue. Going to have to move it.

I experienced the same problem with my Wyze Cam. I plugged it into a receptacle that is on a separate circuit than the motion light and it did not come on and off. It appears the frequency and electric magnetic field of the Wyze Cam travels through the conductors of the motion light wiring.

All my research found that you need at least 2 ft. Had this problem as well. I even wrapped my power cord with ferrite cores at both ends. In the end it was the distance between the camera and motion light.

Thank you for the info. I had the same problem with V3s mounted on the Wasserstein motions lights. The lights are fitted with camera mounts for Wyze cameras. Strangely, one light on the back of the house zero issues, backyard constant and on the garage occasionally an issue. I think Wyze should have mentioned this problem.