I installed a Wyze Cam Pan outside of our front door but I found that it was sending too many false motion alerts for everything from the leaves blowing on our tree to cars passing by on the street and people walking by on the sidewalk.

So I paired it up with a motion sensor, turned off all alerts on the camera, and used only the sensor to send smart video alerts to the camera. This helped a little bit, but it was still picking up traffic and people on the sidewalk, which I didn’t want. Then I tried this little hack and it worked like a charm. 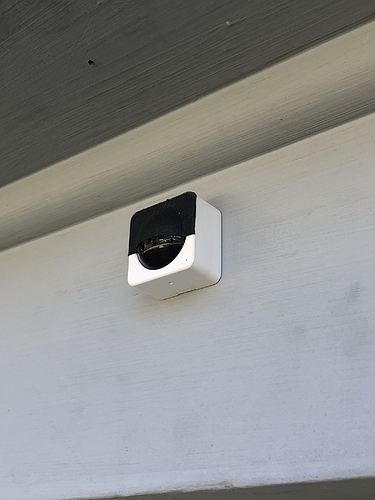 I covered the top of the sensor with gaffer’s tape (which is flexible, weatherproof, and removable) as shown in the pic. After a little trial and error I found the perfect sweet spot which was about 60% covered. Now the sensor only picks up motion on our property, not the street or sidewalk. 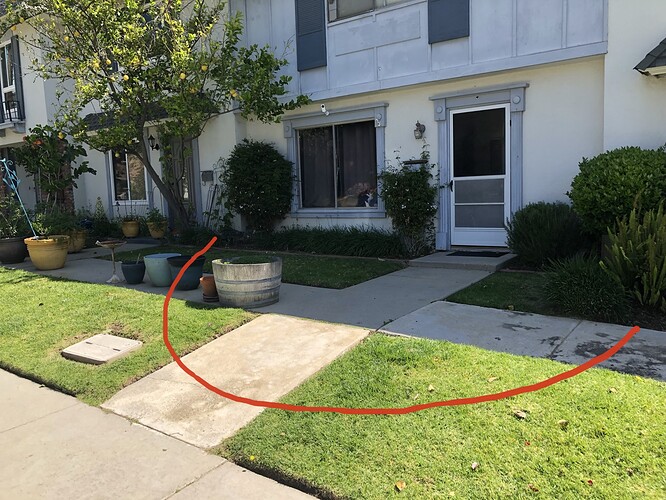 Nicely done! I am sure that will help some folks in similar situations. Now if I could just mount working lasers…

Makes sense, thanks for putting that out there

Another option of you have any sort of overhang, is to put it close enough to the edge that it blocks all that external motion.

We use this one to automatically turn on the Wyze bulb in our porch lamp. It seems to deter the neighborhood weirdos when they walk up to our porch at night here in Downtown Vegas. 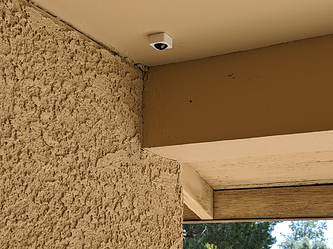 Interesting, I was also considering putting it face down like that. I wonder what the detection pattern is, and if it’s directional (more sensitive on the led side, vs the logo side).

It detects more downward than upward. I forget the exact angle but the top side is a much less dramatic angle. I’ve used it to my benefit in our bathroom light sensor so it doesn’t pick up the hallway.

Great idea, thanks for sharing!
I was using a post-it note to block one side of one of my motion sensors, lol!
I actually have gaff tape too, so I copied your technique to block the one side I needed blocked and it looks so much better without a post it note sticking out from the wall on its side!

Thanks. My motion sensor is picking traffic on the road and my house sits back at least 50 feet. This should help.

One side note…I hope you’re putting something on the tape, the part touching the lens or you will NOT get that glue off without destroying the lens…Just sayin…

Right – that was the reason for using gaffer’s tape. It sticks really well but removes clean. It costs a fortune but it really is the stuff of miracles. https://www.amazon.com/gp/product/B00GZE3UJ8/ref=ppx_yo_dt_b_search_asin_title?ie=UTF8&psc=1

And besides, in the off chance that it does leave something behind, I’m out $6 for a new sensor.

I use Miles of it for a living, and I have not found that to be true. Especially after the Heat and time get to it…Just thought I’d mention it…

I really find that it depends on the brand, some leave more than others.
I’m unfamiliar with the brand linked above.
And for cleaning the glue, rubbing alcohol!

Agreed, the cheap stuff is just a peg above convenience store duct tape. Get yourself a roll of the good stuff and never look back. Gaffer Power, 3M, Pro Gaffer, etc.

Regardless though, let’s not forget this is Wyze we’re talking about. The battery will cost as much to replace as the entire unit, so who cares if the tape comes off or not?

You can also buy a few of those sensors for the price of a roll of gaff lol!

True that, The boss only buys 3m or Nashua and we use up close to a case every 2 weeks. And I’ve had to try and pull up stuff that has been holding down wires for sometimes 3 weeks. Not fun… and the glue doesn’t come off of glass or expensive Microphones at all.

Person detection (which WAS a feature of the camera) would solve that problem, but sadly we no longer have what we all paid for.

To be clear, Person Detection was:

Not an original feature of the camera. It was a FREE add on.

Wyze’s own Person Detection is being rolled out as we speak.

So you never paid for it, and it’s replacement which you also will not have to pay for is close to full scale launch.

It was taken from Wyze by its original developer so they had to engineer their own. It’s in testing now and will be out soon. [Mod Edit]

I have been using person detection for about a month now, and it is already better than the original. I would say 80 to 90% accurate and getting better.

There is nothing untrue about my statement. [Mod Edit]

[Mod Edit] The falsehood in your statement was that you wrote

sadly we no longer have what we all paid for.

When in actuality you never paid for it in the first place. It’s unfortunate that XNOR due to being bought by Apple, terminated Wyze’s use of their technology. However Wyze was very upfront about the loss and is currently releasing their own version (which I use myself), so very shortly you will be able to use Person Detection again.

The “cynical” comment probably reflected the fact you were referring to a free add on as something you paid for. The camera is still selling for the same price it did before Wyze added XNOR’s AI technology for Person Detection. And Wyze has publicly stated they will provide the replacement for free as well.