As most know, these wyzecams were not designed for outdoor use. However, many are using them outside. While no one reported any issue with cold temps, we have yet to know if/when high outside temps will disable a camera.

Today, my 2 outdoor cameras survived a temp of 90 degrees fahrenheit. Both cameras are under overhangs, and, therefore, not being hit by the sun’s rays.

If your camera fails due to high temperatures, plz reply to this post.

We are the 'unofficial beta testers. Hail to us…Hail yeah…

Today, the temp reached 93. As temps go higher, I’ll only be running 1 outside camera. I’d like to avoid a scenario where the temperature breaks both my outside cameras at the same time #firstworldproblems

Here is what https://www.wyzecam.com/specs-v2/ says:

I can’t find any specs for the v1.

If you try to film a cremation, you may run into some trouble. I got 7 seconds (guess he wasn’t quite dead), then I assume the camera went into cool down mode. Didn’t help.

Nice work! I’m a little disappointed in myself that I didn’t look at the specs myself. I think I may have “lost a step”.

Your testing and reporting is worthwhile. Specs don’t always agree with reality.

Well, my ambient temp has touched 98 degrees for a coupla days now. I have 2 outside cams and 1 in the prolly-hotter garage. There does not yet appear to be an issue at that temp.

Has anyone had a camera up to 100 degrees?

I now have one in my attic. Should hit a bit over 110 up there in the next day or two (forecast to be almost 20 degrees hotter outside on Tuesday than it is today and it should be sunny, so much hotter in the attic). I also have an environmental monitor up there so I will what temp it reaches. I will report…

I live in the far NW of the Phoenix area, but we haven’t hit 100 recently, just high 90s. I have two garages that face North, so they don’t get super-hot, but basically just whatever temperature it is outside. I have a Wyzecam, Grandstream wi-fi camera, Grandstream PoE camera, Foscam P/T , and an Axis Q6045 in them. None have had an issue. The Wyzecam hasn’t lived through a summer yet of course, but the others have. The 6045 is heat-hardened, but the others are not, yet don’t seem to care.

(Why so many cameras? I have a business that deals with video in a specialty industry, and run test servers at home.)

115.7 and climbing in my attic as I type this and the camera is working fine. We’ve got a couple more hours of getting hotter up there before it starts cooling down.

My attic peaked at 123.85 about a half hour ago and it’s still 123.6 up there. The camera is still working, and the IR filter will switch in and out when I command it to (In Auto, it stays in night mode unless I turn the lights on).

In my neck of the woods I wonder how the humidity will play with the camera. It’s not at all unusual for us to be in the upper 90’s with heat indexes over 110° in the summer because it’s so humid you think you’re in a shower all day.

Inanimate objects don’t feel humidity as far as “feeling hot” goes. This only affects animals that sweat. Humidity only affect electronics if it condenses, such as with a rapid change to cooler temps where it condenses inside the device. If you took the hot camera from outside to inside, the rapid change might cause condensation. If you then power it on, it could cause a short. You might also get condensation on the lens.

The condensation is the part that worries me. Maybe I can put a wristband on it. ?

I have glasses. The only time they fog is when they are cold, and you walk into a warm room with enough humidity that the glasess cooling the air reduce the air capacity to hold water. You see condensation on a glass of iced tea, not a cup of hot coffee. The only other time is when the humidity is very high and the item is lower than ambient temp. (Hot breath on cooler glass).

The point being, you are less likely to get condensation on the inside of the camera where it will be above ambient temp. If it is outside there may be some dew (due to the air cooling at night, and thus reducing its ability to hold moisture (making the relative humidity go up, and when it gets to 100% you will get fog/dew).

As Carlos says, if you took a camera from the outside on a hot humid day, and then took it inside an air conditioned room, the case would drop temp and the hot humid air inside could condense. Or if you had a cold front come in on a hot, humid day, it may cause similar internal condensation.

Here is the temperature chart for my attic this afternoon. High was 128.41. The V2 camera is running fine. Just for good measure, it’s dark in the attic, so the IR illuminators are on. 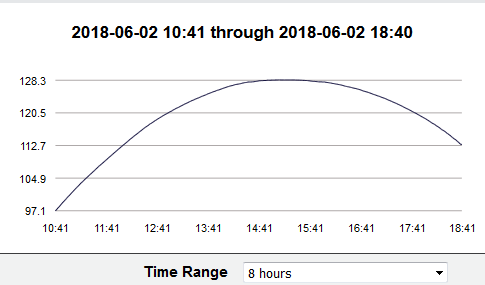 Out here in Vegas its been pretty hot. Currently 105 and one of my cams has been outside completely exposed to direct sunlight for the past couple days. No issues so far.