Just had a leak in the basement and the sensor alert didn't work :-(

I have the leak sensors with the home hub. i just had a leak in my basement and the hub didn’t do any alarm :-(. i did check my phone and indeed the sensor just notified me on the phone but I was away from it. is there a way to turn on a loud sound or at least that Alexa will tell the people in the house about the leak ? the only reason I bought the hub was for the leak warning, but when it happened it didn’t help. what a disappointment,

Set up a rule:
When: [Leak sensor name] Detects a Leak
Action: [Camer Name] Turn on the Siren

Amazon/Alexa doesn’t currently support Leak Sensors as triggers, so we need Alexa to add that support first. There are some complex advanced work arounds using things like Tasker, and maybe IFTTT Where you can push webhooks to Google or Alexa to broadcast things to smart speakers, but this is beyond most people’s capabilities to do. None of that is Wyze’s fault though, the big boys just don’t support leak sensor routines yet. Wyze does natively allow you to create your own routines for a siren through, so that helps. Other people also make lights flash when a leak happens too.

i understand that Amazon/Alexa doesn’t support it but the security hub of wyze does have the ability to make sounds (I am using it to ping me when the doors are open). how about doing a high alarm when the sensor is getting wet ? is that too complicated?

Sounds like you have the “tunes” enabled. Although the speaker in the hub can’t be controlled like that, you can control the siren on v3s via the rules like @carverofchoice mentioned above.

Sorry to keep posting about another vendors product, but YoLink is a better choice for this. With a speaker hub and water sensor you can get a spoken alert with a siren, SMS messages and email when a leak is detected with repeated notifications if it isn’t resolved. You can also use the sensor with the robot water valves to turn off the main if a leak is detected to prevent major damages.

Wyze is way behind on this. 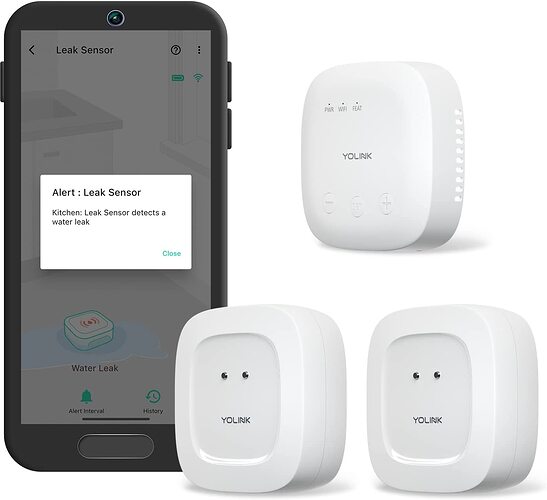 Do you have the HMS/Noonlight monitoring service? If so you’ll get a call from noonlight and the hub will make a loud obnoxious sound.

YoLink is self-contained. No contract needed and many of the features work without an internet connection.

I’m simply offering the OP another option since he/she already has the wyze equipment. Cheers!

Yes understand that. My only issue is Wyze is falling behind other smart home companies by concentrating on vacuum cleaners, scales, head phones and the like rather than sticking with the original line of products that brought them success. Everyone is eager for outdoor motion sensors, sirens and alarms and maybe even self-monitoring. All of these are available with other vendors without the need for subscriptions to an overprices monitoring service that many, like me, don’t need, but it is required to get the functionality. Not to mention that, of late, they keep breaking the app and many of the products seem to have many bugs.

My only issue is Wyze is falling behind other smart home companies by concentrating on vacuum cleaners, scales, head phones and the like rather than sticking with the original line of products that brought them success

The VP agrees with you and said he made changes similar to your suggestions. He wants to return to having the product focus be about Cameras, Comfort and Control [of the home], as well as a shift away from cloud dependency and start having things be LOCAL-based a lot more. I love his answers on all of that!

Yes, this is a key question for us. For me on the hardware side, I tend to talk about the “3 C’s” with my team: Cameras, Comfort, and Control. So you can see that things like our new air purifier fall into the Comfort category, and the new Lock Bolt falls into Control. Where I struggle are items like the updated Scale X we just released. This isn’t a connected product in the traditional Wi-Fi-always-on kind of way and doesn’t cleanly fall into one of the above categories, but it sells well and helps new users discover the rest of our products, so we’re committed to advancing this lineup. Products like the Watch, which end up being fashion accessories, have been too crowded and complex for us to make significant traction in, so you’ll see less investment in these “Lifestyle” product lines as we continue to refine our focus back on these three core areas.

What concrete improvements do you personally believe you have contributed to Wyze since you joined the company? What are your primary goals and efforts for the near future (preferably something other than finance/profit related)?

Wow, this is super deep! I would love to grab a scotch with you some time and talk about my 1.5 years at Wyze so far. But as a simple summary, my contribution has been to raise the bar on product quality and focus us back on core smart home and cameras. I’ve killed a lot of product ideas that were pushing us too far away from that cohesive strategy of cameras, comfort and control. My primary upcoming goals are all related to some AMAZING cameras we have slated in the next 6-9 months, all of which were kicked off right after I started (it’s been hugely helpful to see the entire innovation cycle of these products instead of coming in toward the end like I did for many others). I’ve also been the loudest voice of support our Matter expert, Frederik, who has made a compelling case for the shift away from cloud-only control paradigms.

Seems this thread has gotten off topic.

I’d like to double down on this topic. I was an early adopter for wyze and have loved every new device until the leak sensor - only because of the lack of integration with alexa.

A water leak is an emergency and there needs to be effective notification. A blip from the app on the phone isn’t sufficient. I to am forced to use yolink so I can get alexa verbal warnings for a leak.

Wyze has now updated the leak sensors to be able to set off the HMS siren and have Noonlight contact you. Go into the monitoring tab, then settings → Environment and then edit the hazard remediation settings and click on edit monitored sensors and add your leak sensors into the monitored list. Then when those sensors detect a leak, they will set off the siren and Noonlight can contact you to make sure you know there was a leak.

In addition, we can attach leak detection to other Wyze rules too.

But yes, I am definitely supportive of Wyze getting these added to Alexa. It might be hard now that Alexa has downsized their department and going through reorganization and budget cuts, but I would really love to have Alexa announcements for things like this.

Thank you for your response and I appreciate your suggestions. Unfortunately I don’t have a v3 cam – which is where I believe the siren operates. Nor do I have a monitoring subscription any longer. I’ll bark at amazon too… ;>)

because of the lack of integration with alexa

I have also dealt with several Wyze IoT products that are not Alexa integrated. But, I am still able to use them as Triggers within Alexa Routines by using a Wyze Plug as a relay device. Yes, it is a workaround and adds the cost of an additional plug, but it works and it is quite reliable. I use them for any Wyze Trigger that isn’t in Alexa. I am using Wyze Plugs currently as relays for my Climate Sensors, Leak Detectors and my Thermostat and they can relay in both directions as triggers and as actions.

In the case of the Leak Detector, a Wyze Rule uses the sensor as the trigger (I have 4 rules, one for each sensor) to turn the Wyze Plug on for 3 minutes when it detects a leak. An Alexa Routine then uses the Wyze Plug turning on as a trigger to execute whatever routine actions you want Alexa to accomplish.

Here is my Leak Detected Routine. I also have an internal siren plugged into that Wyze Plug that screams for the 3 minutes the plug is on (Wyze Plug is named “IN

This is an excellent idea! I didn’t have any wyze plugs but I do have a wyze outdoor plug I was using for the Christmas tree. So I set up the routine on the second plug I wasn’t using and it works perfectly! $15 for a pair of wyze plugs is a reasonable cost for a workaround until they get the alexa integration for the sensor. My yolink leak sensor is on it’s way to the thrift store… ;>)

My yolink leak sensor is on it’s way to the thrift store… ;>)

What? There are users here who swear by YoLink. Is it not Alexa compatible?

$15 for a pair of wyze plugs is a reasonable cost

I stocked up when the were on sale @ $9.99 a pair. Best thing is I can set a timer on them and use the auto off to trigger something as well. That’s what I do with my Thermostat ones. On sets the thermostat to away, off sets the alarm sirens on a delay.

Yes, yolink is alexa compatible and works great. I got it before wyze came out with their leak sensor. Right now I’m trying to decrease my tech diversity in general, and eliminate hubs in particular.

I admit, having worked IT for 30 years, that from a certain perspective tech diversity isn’t a particularly bad idea. I may also be trying to justify the cost of the wyze sense kit I bought… ‘>)