Ideas for Universal Remote - Build a IR interface for controlling TV, A/C and other home appliances

With the release of Wyze sense and Wyze’s push into home control I would hope to see an IR module to allow control of home appliances similar to a universal remote. There are currently two options, a very expensive Logitech Harmony hub or barely usable Chinese devices. I would love for Wyze to provide a reasonably priced solution for this problem. I’m not sure if this function can be adapted into the IR LEDs already on the camera, but a plugin module similar to Wyze Sense wouldn’t be a bad option either. The community can provide and share the IR database by programming their own devices and providing information on brand/model.

I’d prefer to see a model that can emit both IR and RF as to cover virtually every remote controllable device.

A seperate device would make the most sense as we have remote controlled tower fans in our bedroom where we don’t have any Cams or motion sensors. Being able to tie it in with a routine on Google Assistant would be great as well!

I agree. This would be great!

You know, until Wyze decides to develop something like this, I used to have a BLAST with a Casio CMD-40 Watch. We are talking early 2000’s, I think. Maybe you can still get one. I controlled my TV from it, and was the hit of my friends in bars when I could change the bar TV to their favorite sports team by nonchalantly tapping on my wrist. Confused the heck out of the bartender. The TV kept changing channels, but they didn’t know why, lol.

It even had a learning mode where you could teach it any IR code you liked. Just hold the foreign remote up to the sensor, and assign the command to a button on the watch.

When cell phones became so prevalent for telling time and I started using my computer to watch TV shows, I took it off my wrist. But it was a blast for a long time, lol! 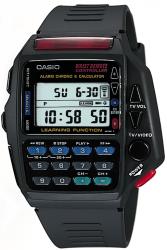 What are your thoughts about a Wyze Entertainment hub to compete with Harmony?

A universal remote with simple set up and actually controls individual devises of the entertainment center.
PLEASE SEARCH #wishlist and #roadmap and read the How to Use the Wishlist BEFORE POSTING.

Logitech is dropping Harmony, so this is a good opportunity for Wyze to make a good TV controller!

Harmony will be supported for a while, but will not make any new ones

With Logitech discontinuing its Harmony Remote Controls, this seems like a great time to jump into this market.

With the somewhat recent announcement of Logitech killing off the Harmony remote series, many people will be looking for an alternative remote. I am personally looking to replace my Harmony remotes due to many issues with them and useless tech support and found that there are not any similar and affordable alternatives. I feel that Wyze could create a better product for a similar or lower price that would be all the Harmony remotes were and more. Integration with other Wyze products could be added, such as dimming Wyze bulbs when the TV is turned on, being able to turn on the sprinklers with the press of a button, etc.

While many of these things can be done through a phone currently, I think many people (me included) would appreciate being able to quickly and easily control our homes without having to open the Wyze app. It would be particularly useful when family members without the app want to control smart devices.

Please consider this submission and give it a vote if you think it’s a good idea!

Logitech Harmony remotes have activity-based functions. Where you can push one button and turn on several devices and turn off several devices. This works wonderfully in my home theater where it turns on my receiver, my dish, projector, turns Off the lights and turns on the lamp. You can have several different activities that all function differently but again one button push does everything. For me to currently integrate everything I have to use Lutron and Insteon. But with the Wyze product line I could go with just one company, that being Wyze and eliminate 2 hubs. I would love to see why do you take harmony remote integration.

[Mod Note]: Your topic, associated replies and votes were merged to this #wishlist request for better visibility and consistency in grouping similar requests.

I agree, to help the ecosystem it would be great to see if wyze can be an option with logitech as it is an excellent tool for the home ecosystem. not to mention the significant cost difference that wyze has compared to other option for items like bulbs. once we get the door bell and thermostat, most of the house ecosystem common items will be wyze brand, except for the bulbs and window blinds.

Would love this! My subwoofer and receiver / components are all on the wyze plug to reduce energy consumption while not in use. Integration with harmony would eliminate the need to use multiple apps/remotes, as this is the essence of the harmony remotes.

[Mod Note]: Your topic, associated replies and votes were merged to this #wishlist request for better visibility and consistency in grouping similar requests.

The world needs a great Wyze universal remote control. Arguably, the Logitech Harmony line was the 800 guerrilla for many years, however, in 2021, Logitech discontinued the universal remote business, creating a void in the market that Wyze can uniquely fill!

Some features I desire (may or may not be mentioned above):