I felt I was a little mislead when I read that Wyze cam’s work with the Google assistant. I was hoping I could integrate into my routines (ex. Turn the camera on when I say ‘ok google’ turn on ‘Waze camera A’). In the Google routines there is an option to use a security system, but Google doesn’t see Wyze as a security system. So I have to turn the camera on or off manually through the Wyze app each time I wish to, separately from all my other devices that connect through Google. It’s a minor inconvenience, but if that can be fixed, I’d appreciate it.

Your submission has been merged (see below). For future reference, please search the #wishlist and #roadmap categories before submitting a new #wishlist topic. Use these links to search each category:

You can now hop on over to the merged topic (see below) and VOTE for it. For your vote to count, you must click the VOTE button at the top of the page.

I think the main reason Google does not see WYZE as a security system is because it is not marketed as one as WYZE says not to use it as one. Although I know people do, including me.

You can use Google Assistant to check the status of your cameras or turn them on.

Say any of the following to view your camera’s live stream:

Say the following to stop viewing your camera’s live stream:

Say the following to determine the state of your camera:

Say the following to turn on your camera:

Adding ability to turn camera off would be great

You should be able to accomplish this thru IFTTT

My guess is for the most part yes, but they claim they will restore some things with a Google API after killing the Nest API. It’s mainly a wait and see what happens, the supposed date they will kill Nest API is Aug 31

The specific issue is that Nest’s integrations with IFTTT (specifically the Nest Thermostat, Nest Protect, and Nest Cam services) are going away. I am not aware of any plans to end Google Assistant’s ability to work with IFTTT.

I do have some feedback on the bulbs.

•Having schedules for turning on and off grouped and individual light bulbs.

•Having scenes that can be seen in Google Assistant as opposed to scenes that are more equivalent to presets.

•In Google Assistant under Home Control, under scenes tab, scenes should be seen in this area. (See attached photo of example from “The Competition “) 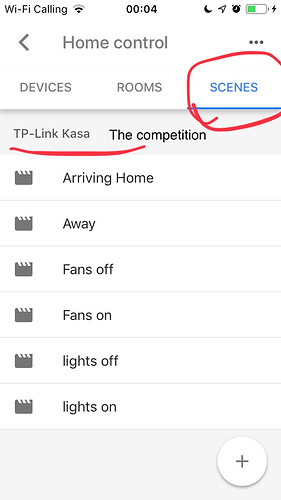 Bulb Scenes that can be controlled in Google Assistant

•Having schedules for turning on and off grouped and individual light bulbs.

This part of the topic can already be accomplished using the Shortcuts feature of the app. To learn how to use Shortcuts, click the Support link, top right.

It would be very useful

Adding my vote to this. It was literally the second thing I tried.

You say you are adding your vote, but the vote doesn’t count unless you click the VOTE button at the top.

A post was merged into an existing topic: Please allow control of Color Bulb Scenes from Google Assistant/Home

I just got my wyze sensors and would love it if it were possible to set a routine/action that if I open my front door it checks other sensors to make sure they are closed and sends a notification confirming that.

I specifically bought these because of the announcement for Google assistant. Its infuriating to see this stuff continue on in tech after working in the biz for 20 years. I cant turn off the camera but can turn it on? Thats like saying I can turn on the light bulb with a routine but nope not off.

Current Google Home integration is a true disappointment. Live casting is limited to only 10-minute but that wouldn’t be that big an issue if it actually worked. Too buggy sometimes getting a blank screen with the time limit winding down and it may or may not come up a few minutes later but then times out.

I have the same issue. Google Assistant can turn the cameras on, either with my “I’m Leaving” routine or when I just ask it to. It cannot turn them off either way. It’s weird.