I’m having a similar issue albeit a bit different. Instead of clear gaps in the playback timeline as reported. By OP, the entire playback timeline is shaded in green but there are certain minute recordings which will not play back and will be skipped…

Not sure if it helps the investigation but I noticed that my v2 camera will crap out if the footage it is capturing has too much movement in frame. In my specific case and where I mount the camera, there’s a small tree which during windy conditions will cause the leaves and branches to sway rapidly. I find under those conditions, the cameras slow bit rate can’t keep up with the compression/encoding and results in a recording that could not be played back.

Sometimes, that minutes worth of recording will not be playable, sometimes it’s several minutes worth (e.g 5-7 mins). Even the event recording sent to the cloud does not playback. As a test, I setup my old Arlo Q right beside the Wyze cam and the recording was fine, even though I could see drop frames at times. Nonetheless, the recording was usable on the Arlo but not the Wyze.

I have noticed that on my Wyze (version 1) with an SD card, if I go in the past that I see several holes in the history timeline. The screenshot attached shows what I mean. 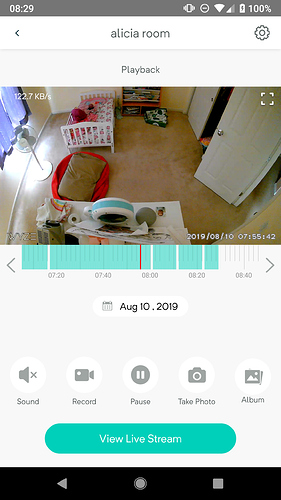 I tried to reboot the Wyze camera without better success. Any idea?

I don’t think there is any solution yet for this…

I’d try formatting the card and see if the problem persists. If so, file a support request (in the app: Account > Help & Feedback > Report and Issue).

Enough with the “Reformat the card” already. I reported this in May of 2018. Look back in the thread. I’ve reformatted and I’ve replaced the card. There are cases already open.

In the past, I’ve suspected that there is an association between event uploads and the gaps in the recording, but when I checked today, there were no events at the time of the gaps.

Wyze, are you telling us that with all the V1 cameras you have there that none has ever had a gap?

I do see this occasionally myself. (To be clear, I don’t work for Wyze.)

What was the result of your support case?

I don’t have any events where my gaps are. I only noticed the gaps in 2 of my 3 wyze v1 cameras. @WyzeGwendolyn, do you know if there are any updates on this issue? It’s been over a year and there is no fix.

Sorry @Loki, I saw Moderator and figured that was company advice.

There has been no action on my case. I’d be happy to send them the camera if that would help.

If they would send me a replacement camera and a return shipping label, maybe it would help them find the problem.

As far as the event recording, there were a couple of times where I wanted to see more of an event, and the recording happened to be missing at that time. It’s as if something the camera is doing is too much for it to handle, so maybe its record buffer overflows before it can be written to the card.

@Scott56 Could you post your support ticket number here so I can pass it along to Wyze?

Same issue here - been using for almost a year

@Scott56, could you please confirm your support ticket number? This one doesn’t have enough digits and/or is extremely old and was reassigned a number in the support site migration.

I’ll get this thread over to the team again. I haven’t heard updates on it at this point.

If they want to create a debug version of the firmware, I’m sure that some of us would install it to help them find the problem.

I am also experiencing a similar issue but fortunately, the 1 minute recording gaps usually happen once an hour instead of happening very frequently within 1 hour as some users have reported in this thread.

I believe this is not an app issue but a Wyzecam and SD card issue? Previously, I was using another SD card for both of my v1 Wyzecams and it was working flawlessly (Sandisk 32GB Class 4). After about a year or so, I had to replace them and I chose the Samsung Evo 32GB Class 10 cards but I noticed that there are recording gaps every so often. I did make sure to check with the HWtest tool to make sure the card is fine without any issues but I guess Wyzecam is having difficulty trying to save the continuous recordings to the Samsung memory cards?

I ALSO AM EXPERIENCING THIS SAME ISSUE, EVERYTHING IS UP TO DATE, AND GAPS IN MY PLAYBACK RECORDINGS.

Welcome to the community, @brandonroskom. Sorry to hear you’re having this issue.

In order for the community, and Wyze, to assist you better, please always provide all of the following.

This is needed because “latest” and “up to date” are subjective to when a post is added to the forum. (It is also important to distinguish whether an issue is actually with a beta version, as opposed to a public release.)

Hello, I ALSO AM EXPERIENCING THIS SAME ISSUE, EVERYTHING IS UP TO DATE, AND GAPS IN MY PLAYBACK RECORDINGS. Running the latest Wyzecam firmware.
PHONE TYPE: IPHONE 7
iOS VERSION: 13.1.2
WYZE APP VERSION: V2.6.62
FIRMWARE VERSION: 4.9.5.36

@brandonroskom, do you have your camera recording only on event, or set to continuous? Please see the below support article:

Using a microSD card with your Wyze Cam gives you the ability to record continuous footage and recorded events directly to your local microSD card. You'll also be able to record Time Lapse videos. ...

I’m facing the same issue on the end of the minute (I think when closing a file and creating a new one). Every 59 seconds of the hour, is missing the sound and the video crashes… the video and sound comes back every second 03. I use Sandisk High Endurance 32GB MicroSD card.

My Wyze Cam V2 with the latest firmware seems to miss about 6-7 seconds at the start of each file(minute) in continious recording mode, I think it might be the time it takes to move the last minute recording to SD card (file size about 9-10MB), then restart recoding (with the person&motion detection). Seems like the camera has slow IO. The bigger the file the bigger the gap (SD quality loses less)