Along with the timestamp, consider adding the ability to add a stamp equal to the camera name, as well as the TYPE of camera it is (v3, V2, WCO, VDB) (this would be good ‘advertising’ for when footage is posted to youtube, forums, etc)

Would you mind verifying that you indeed have the AI options on the Notifications screen for your V3s please? I have never had the individual AI notification options for my V3s or Pan V2s (only the Detects Wyze AI Events toggle). I DO have the options for my v2 and Pan V1s. I seem to remember that this was brought up before in another FIF.

the Images are for my V2. The V3 Firmware which was halted also provides the individual AI notifications. In any event, I am asking for consistency between Menu options and between Devices like iOS and Android. I test in both and see some differences and functionality or even layout.

Thank you for the reply. I did not bite on the now-halted v3 beta firmware, after what the v2 and Pan v1 beta firmware did to my cameras (still waiting for those fixes). Good to know though that the additional functionality will be in the V3s when the new firmware is released. I did vote for your post.

There have been many reports in the forum of serious degradation in the quality of the V3 cam image, especially in IR NV, resulting from a recent Firmware update. The IR NV and Color NV are significantly darker than previously documented. Also, the image quality is very poor: grainy with excessive digital artifacts. Image quality in color daytime has also lost it’s previous clarity with many digital artifacts, motion trails, and skipping.

Did you guys just hobble the Starlight sensor with your latest update? I bought the v3 months ago and have been enjoying leaving the infrared night mode off because there is enough light in my area to still see stuff at night. Today it looks like mud, like a cheap webcam. Can I just revert to your old firmware and not pick up your updates anymore if you’re going to just do stuff like this?

I’m not trying to beat a dead horse here as I know this has been discussed a lot on the forum. However, recently the quality of night videos have deteriorated considerably. Not sure if it is firmware or hardware related, so I need some advise from seasoned users on this forum before I take it with support. Wyze Cam v3 Firmware 4.36.9.139 App iOS 2.32.2 Here is a short video of what’s happening: Notice that there is a huge amount of artifacts, never had that before. The quality wa…

My older Wyze cams all seem to be suffering from issues related to night vision. While one has completely lost night vision capabilities others’ night vision is barely visible and getting worse over time. I just got a new Wyze Cam V3 and it’s night vision quality difference over the older cams is like…well…night and day. Cameras that I am having issues with: Wyze Cam V2 and Wyze Cam Pan (three of these with one showing dark image even with night vision on), All of these are anywhere from 1-3 y…

The change in image brightness and quality coincides with a change in the light levels required for the V3 to Auto engage and disengage IR NV. Cams will switch into IR NV in very low light conditions, but will never disengage IR NV when light levels far exceed the threshold to engage it. Forcing a settings cycle (on\off\auto) back into Auto will return it to Color vision until the extreme low light engages IR NV again.

Thanks for the suggestion. I tried cycling from NV OFF to Auto (menu or moon button) and it worked fine on the camera activating color NV. What I am seeing now is this scenario: NV mode: Auto IR Night Conditions: Dusk or Dark Camera Target: points toward garage ground location (e.g. concrete ground). Change: Ambient light level rises from very low-light condition to daytime indoor light level (e.g. light coming thru’ from frosted glass paneling of garage door) Problem: Camera stays in …

Hello y’all I’ve been having trouble with two of my cam v3. Color night mode won’t work at all, it’s completely dark. I’ve restarted and unplugged and all of that but still no color night mode. Started 4 days ago all of a sudden. Suggestions?

I have 2 Cam v3. The first one have changed its night mode from Color to B & W, after 3 weeks. I bought 2nd one and it did the same as . I don’t understand why Cam V3 worked good in first 3 weeks in color mode. It doesn’t make any sense to me about firmware update. If you want to test, just buy a new Cam V3 and you will know exactly what is going on.

Wyze Cam Pan V1 assigned to CamPlus is only recording 11s or 12s Event Videos, cutting off Event Videos while active motion is occuring, and is not properly activating \ recording Person Detection events

This issue has been reported in the past with logs submitted, however it has been going on for some time without resolution. Just wanted to get it on the tracking list for Fix-it Friday.

Do you own a Wyze Cam Pan v1 or v2 assigned to Cam Plus? Cameras

If you do, how long are the maximum events recording once triggered (12 seconds, just like not having Cam Plus assigned to it?) and what’s the cooldown period in between events?

Hi folks - after 3 1/2 days, without touching or changing a thing. I accidentally realized no events are being recorded - I did not know sooner because I had disabled notification. Today I wanted to view the past few days, I found out all those days were blank. That makes me so angry. How can users rely on this trash, whether it’s to do with fw, hw or both

Same. A couple weeks ago, my PanCam v1 with CamPlus (pointed at driveway and street) straight up stopped doing any AI detection at all. No changes to the settings; everything is still enabled correctly, but no vehicle detection, person detection, package detection, or pet detection. I’ve disabled and re-enabled CamPlus. I’ve restarted the camera. I’ve turned off and on detection and notification. Still broken. If it does not magically turn on again in a week or so, I guess I will have to cancel…

6 Likes
Do you own a Wyze Cam Pan v1 or v2 assigned to Cam Plus?
WCPV1-CamPlusSub - Events stopped recording for the past 3 days for no apparent reason
Wyze AI Still Not Learning
SlabSlayer August 6, 2022, 11:54pm #21

@spamoni4, I agree that the continuity between the two settings pages (Smart Detection \ Notifications) should be improved.

Additionally, I have noticed that when the Smart Detection for a specific AI is disabled, the corresponding Notification setting for that AI remains active and able to be toggled on and off:

Absolutely. If it is not a select AI for Event Recording, then the corresponding Notification AI attribute should be disabled as well.

Also, I would like to record certain AI events (e.g., Vehicle) but not get a notification of them.

Event videos are cut off on WCP2 with CamPlus as well. I have not scrubbed all of them, but one example I have here is cut off at 23s and then a second video 19s long.

This should be possible? Enable vehicle in event recording, but disable it in notification settings.

I am not sure if you are asking if or telling me that it is possible.

Either way, no, it is not possible with the WCPV2. You can be notified of all AI events or none–there is no granularity, unlike with the WCPV1. 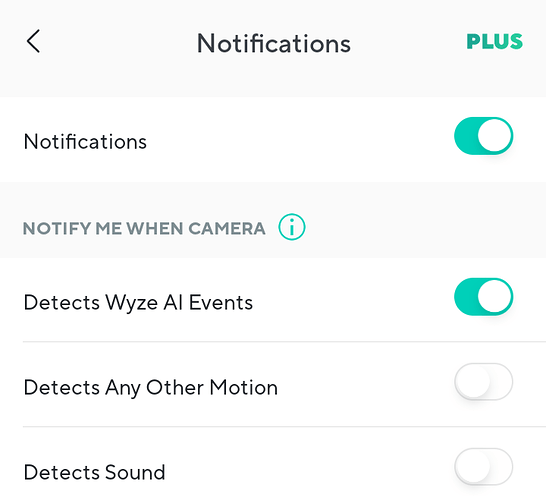 Oh, didn’t know you were referring to the pan. Sorry

As you already know from our previous exchanges, This is something that Wyze is already working on. The granularity in the AI specific notification settings you described is only currently available on limited cams since the function was being developed and tested. The V3 was slated to have this in the next FW release as the Betas did report it appearing within their Beta test.

I am certainly a fan of having it on the WCPv1!

A post was split to a new topic: Looking For an Indoor Camera

My issue is definitely with my WCPv1’s. My WCPv2 is recording clips as expected. My WCPv1’s either limit the clips to 11-12 seconds, or they will break up longer events into multiple back-to-back clips with sections of the event often missing. Motion and AI (people, vehicle, pets) events are often missed or sporadic. Occasionally the WCPv1 will record a longer clip, but the longer clips will always produce an error when trying to view.

@WyzeDesmond, please let me know what I can do to help troubleshoot and resolve this issue.

Often trying to play back a recorded clip on the Events page it gets stuck trying to load. I have to close the clip and open it again to get it to play. It seems to be happening more often and it’s not an issue with my home network. I have numerous V2 and V3 camera’s and it happens on all of them.

VDB (Video Doorbell) stuck at 3/3: Ever since the FW version 4.25.1.060 is “re-opened to the public after review” on 7/28/22, my VDB has not stuck on 3/3 and works well. This suggests to me that the fault was not with the device FW but with the “authentication software” somewhere at the back end server. Can you confirm this? If this is the case, what problem does the new beta FW solve?

@sunshine1 I would say it is on the device since if you have motion in front of the camera it will connect quickly.

More likely they have an issue with task scheduling in the device where it is stuck waiting for motion in motion detection task before servicing the authentication requests.