EDIT 07/25: We are planning to do this for a future build and looking into the implementation now. I don’t have an ETA for it yet since we’re trying to figure out which sprint would work best for this but landscape view will happen.

While we have a landscape orientation for viewing streams, the app itself is not optimized for landscape view. This causes difficulty for people with disabilities and for some other use cases. Right now, we’re not optimized per iOS standards. Best, W…

Those are feature requests. This new Fix-it Friday program is meant to prioritize bugs people are seeing.

I’ll start. I don’t monitor those other forums, so can’t tell if this has been submitted before, but it is still a bug today.

“Wyze AI Events” and “All Other Motion Events” Sometimes Grayed Out

I’ve only noticed this bug on the V3.

Sometimes you go into Notifications and see Wyze AI Events and All Other Motion Events grayed out. The fix is to go into Event Recording and toggle Detects Motion off, then on again. When you go back to Notifications, the 2 switches will no longer be grayed out.

So I don’t know the initial cause, but Wyze probably only needs to go into the database of cameras and toggle whatever flipping Detects Motion on and off is toggling that corrects the grayed out items on the Notifications screen. That should get everyone back on track. Then you may need to find the cause if the problem reoccurs. 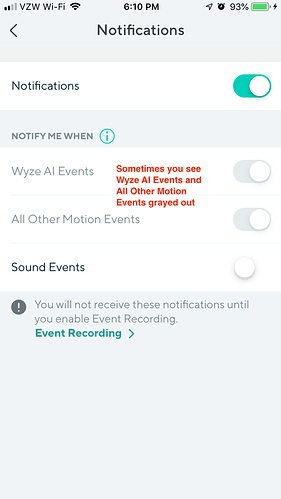 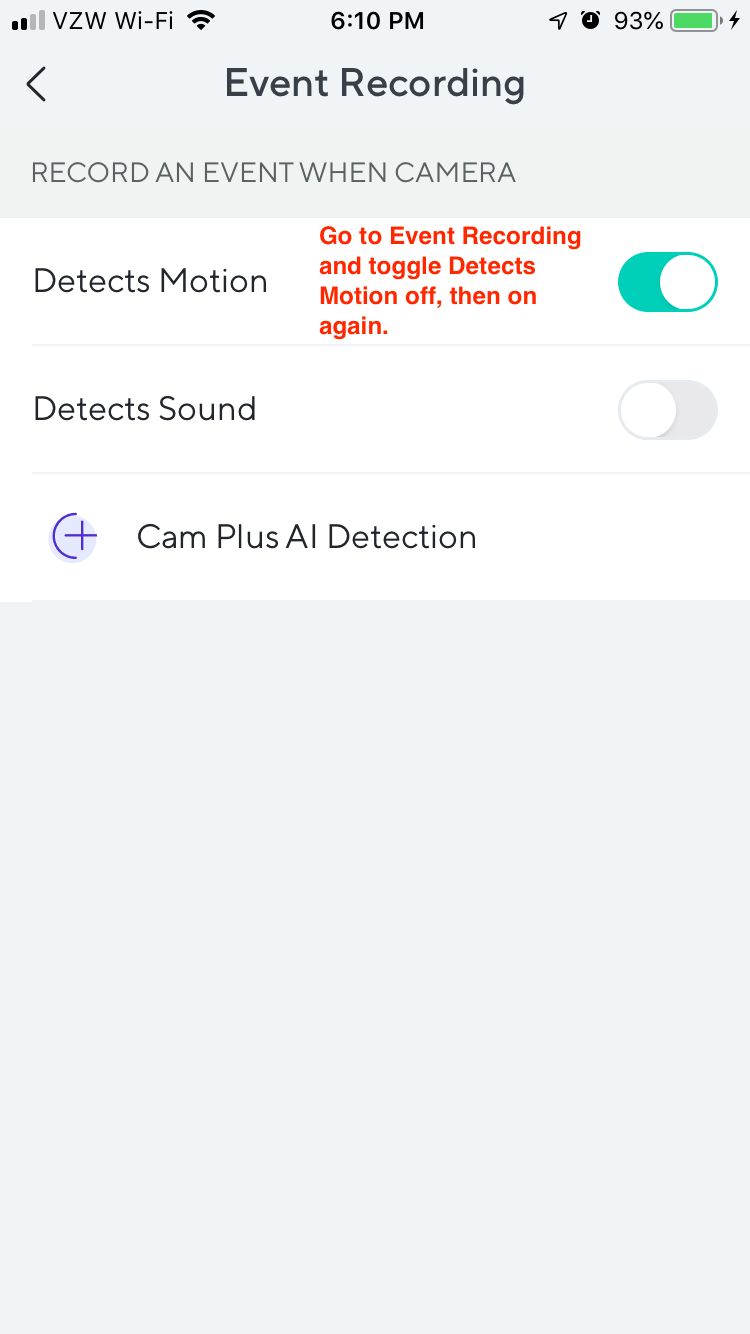 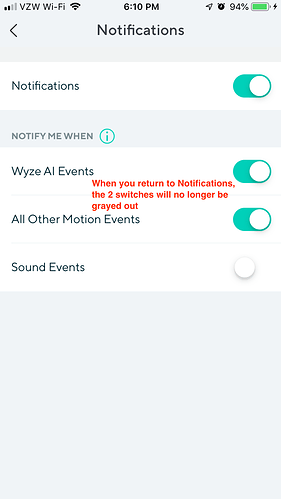 Vote for me! (heart below)

Object lesson then. Don’t do what I did.

In my defense (because God knows I need it):

HUB SIREN VOLUME STILL LOWER THAN IT USED TO BE

Last Fall, around September, the Hub Volume dropped considerably from a firmware update. The High volume seemed to be at the level the Minimum was before…very, very low.

On October 18th firmware 4.32.6.142 was released intending to fix this issue. Per the release notes:

and while some things had volume restored to higher volume levels, such as the entry delay beeping, etc…some other things seemed to be restored to more of what used to be the Mid volume setting before, and not restored to what used to be the HIGH volume level…such as the siren. The siren used to be much louder and doesn’t seem to have been fully fixed from this bug back to the original loudness it had at the high setting when the hub first came out. I can’t hear it as well in the same rooms I used to hear it in loudly before, and my daughter no longer has to cover her ears when it goes off like she used to have to do when it was louder.

Since it happened with a firmware update and it has been louder in the past I assume it is still part of that same bug. The October firmware fix said it only worked on the “voice prompt volume” and it seems maybe devs didn’t realize that other things like the siren volume have not been fixed back to their original volume yet and the rest of the volume bug issues that went along with it may still need to be addressed.

I’ll share your feedback with the team when we go through everything next week. This is the first revolution through all the platforms so it’s a good time for us to look at things to adjust!

So is this an issue, a bug, neither or both?

In my opinion, Both. An issue (or “Problem”, as there is no workaround), to the user, where the functionality does not work as designed and a bug in the code.

Or not, if your desired temp below/above is the default “68”

If you want to exclude a certain type of detection like vehicles, then you can’t toggle on to record all motion: 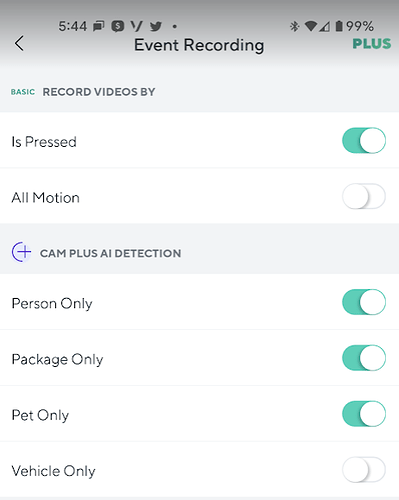 If you want to record all Motion, you MUST detect ALL AI Detections: 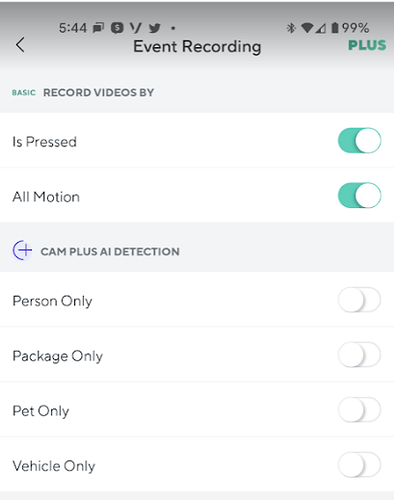 Every other Cam Lets you record all motion, but only choose a few detections that you care about. Thus it seems to be a bug for the VDBPro GUI settings.

Wyze App Product Badges are not all being activated correctly, some not at all, and some not having the backer border when they should.

Some understandably never show up because the product is never “activated” in the app (ie: Cordless vacuum, handheld vacuum) so that is understandable, but some don’t show up even for products that are activated in the app.

Here’s a good old reference to give you an idea of some of the things that appear to not be working correctly with the badges (the rest of the thread lists some others too):

I know this isn’t a critical issue, but some of us do enjoy the gamification aspects of it nonetheless.

The problem still exists, never fixed. Medium volume, MAYBE… definitely not the loud volume that i enjoyed for months before the bug. I can only hear the hub siren if i am in the same room. 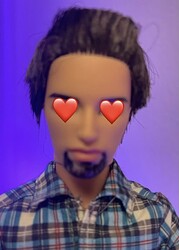 *notice I didn’t really tag groups for my silliness

I second this! Low volume on the hub to this day has yet to be fixed.

The weather on the Watch 47mm does not update unless you go into the app first.

App event conversion to .mp4 causing audio on all saved/shared/downloaded videos to go out of sync/delayed

Something I’ve been noticing lately related to cam videos:

If I watch an Event in the Wyze App (whether it is saved to the cloud or on the SD card), the Audio is fairly well synced.

If I download the same event to my phone (whether from the cloud, or recorded from the SD card), or share it (ie: to Google Photos), whatever conversion process the Wyze app uses causes the audio to be out of sync and delayed by a second or more. Indicating there is some kind of bug in the app causing the audio to go out of sync from the original recording (which plays correctly inside the app).

For example, in several videos where I tell my toddler through the baby cam to go to sleep, in the app you hear me talk, then her lay down and go to sleep, but if I save the video, it often looks like she starts laying down to go to sleep before I have even started talking (which is not what happened).

I have noticed this on V2’s, V3’s and the VDB Pro…all are perfectly in-sync when viewed on the Wyze app, but the audio is delayed if any videos are actually saved). This indicates the bug is likely caused by the app during conversion to MP4.

I have noticed that the VDB v1 does not Provide images when being notified on iOS. On Android you do get the images. I had @R.Good verify this as well.

same, tried new hub, reinstall everything and every other possible fix. I can still can sleep through the alarm if im in the next room and the fan is on. The system armed is louder from the keypad than the hub itself.

The audio / video sync issue on downloaded file has been that way for years. My July 4th fireworks show video from 2018 shows this very well. By the end of the file, the sound from the last salutes comes several seconds before the video - and it should have been a second later.