I understand that WyzeCam is meant for indoor only, and I shouldn’t have flying bugs in my house, or try to look out any windows…

So. I suggest a desperate yes/no option for IR emitter, and IR cut filter (the thing that you can hear go click when night vision turns on). And I dearly hope that this is possible with the hardware. If it's not electrically possible in the v2 hardware, please let me know so I can snuff my dream and perhaps take a cordless drill to the IR leds in mine, or desolder them already.
Loki June 21, 2018, 6:10am #2

This is a popular request. It is possible in the hardware and I believe it’s on the roadmap for future implementation. I don’t have any idea on the timing though.

In the mean time, rather than damage your camera with a drill, people have reported some success using strategically placed black tape over the LEDs.

I would really, really like to see this feature added. For almost everybody who positions their cameras looking through a window this would be a fantastic feature. I’ve disassembled other cameras to disconnect the power wire going to the IR lights but I’ve never worked up the nerve to see if this can be done with a WyzeCam. It was relatively easy to do on the cameras I’ve done it on but just don’t know if it’s possible on a WyzeCam. Oh well, black electrical tape works but it sure tweaks my sense of esthetics and causes serious heartburn. Please Wyze, can you put this capability on the front burner? Please???

+1 on this. This would basically double the usability of my camera seeing as it’s completely useless at night for me as the IR LEDs basically blind my camera and with the IR cut filter in place, the image is basically soup. For something stated as a popular request and I’m guessing would not be too difficult to implement, I hope this gets bumped up in priority on the roadmap.

+1 for this. It’s reportedly available in alternative firmware.

Also, not having this feature is keeping me from ordering another camera…

Customer acquisition costs are a real thing so if you can offer a feature that makes customers want to buy more than one of your cameras you should probably do that. Especially if it’s something that can just be added via a software update.

I disassembled one of my cameras, the IR filter is a real pain in the rear to get to, and removing it is possible, but you will play hob reassembling the camera. The arrow points at the lever which forces a filter switch. 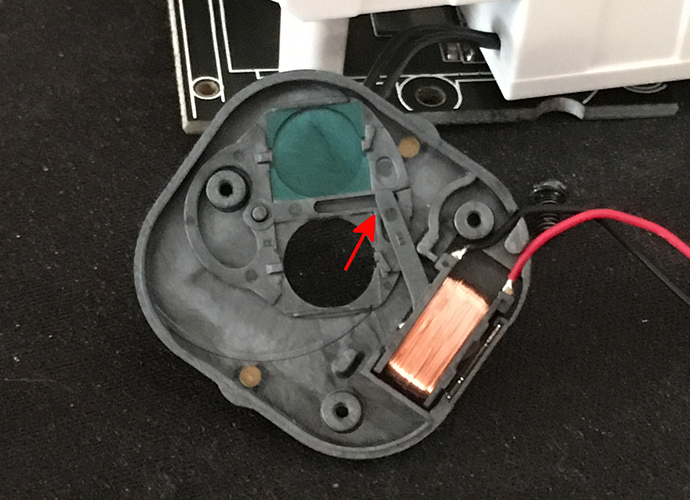 I actually wouldn’t want to remove the IR cut filter; that would play hell with daylight performance.

What I’d like is a way for the cut filter to work independently of the IR illuminators.

I have had pretty good luck removing the IR filter from various cameras, and they seem to work pretty well in the daylight as well, even without the IR filter. I used to do a lot of Astrophotography, using web cams, (back in the day), and removing the IR filter was a must for that. The cameras actually worked with no IR filter, which sort of surprised me. Colors are of course were messed up, but I was OK with it.