An issue I’m having is with faces in nightmode getting washed out completely, whether in color or IR mode. I have the camera installed above a motion spotlight, directed right and left, not directly center where I am standing in the photo. It would seem important that focus should automatically follow a person, especially considering there is person detection, but apparently that doesn’t happen, because in both cases, there isn’t a way to distinguish any facial features from 7-10’ away. Any thoughts or suggestions? To me, getting distinguishable face images is one of the most important features of having a camera, so this is disappointing. 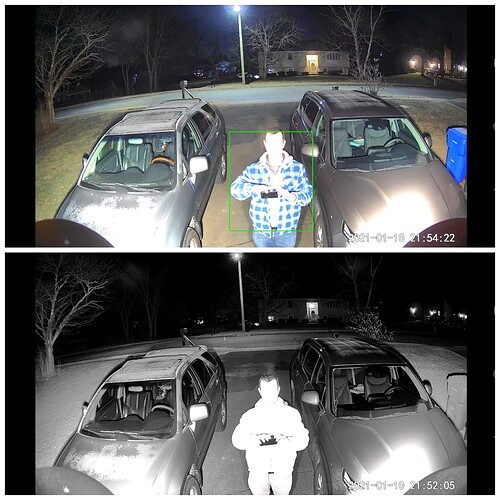 Any thoughts or suggestions?

Yes. Disable or redirect the motion spotlight. It doesn’t seem that the V3 needs it there.

I actually was just tinkering and figured it out, and thought I’d post what the problem was. By lowering the camera angle to remove the streetlight, top-center in the background, it greatly improved the forward picture. Thank you for the reply, we use the motion lights to see when we pull in the driveway, they weren’t for the camera, so they were important to have in the mix.

By lowering the camera angle to remove the streetlight, top-center in the background, it greatly improved to forward picture

Thanks for the update! I believe the issue wasn’t the street light, but more so the black background of the horizon and sky. Aiming the camera down makes the picture that’s in frame have the same luminosity, making the exposure more uniform across all objects. Glad you got it fixed!

post another picture so we can see the difference. Mine is coming in soon and i may be in the same predicament.

I added another photo. You can see if I move a step closer to the light it does still wash out some, but nothing like the total whiteout prior to changing the angle. I took random screenshots standing in various places to make sure that the face whiteout didn’t happen at any location, and I appear to be good now. 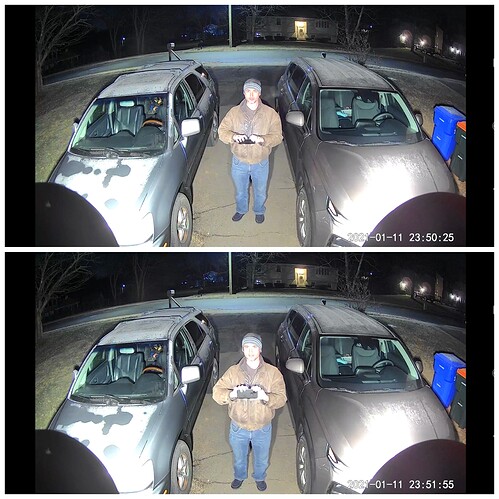 Difference of night and day.

Interesting that the streetlight / horizon alone would matter so much. Same lit houses in the background, same glare off both cars…

The model appears to be standing back a few feet from the original photos also. In the second set of photos, the distance difference is minimal between the top and bottom photos, but it’s noticable in the face skin tone.

It just appears that way because of the angle change and the vehicles were both moved before the second set. I was basing where I stood by the cracks on the ground, so it was only inches different. The lower photo of the second set I intentionally went a step closer to show the difference.