I set up a Wyze V3 on January 16, 2021 in the back yard and have had great success with it up until two days ago. For some reason the video feed has gone to crap but so to have the SD card recordings. The live stream has always been solid with some visual artifacts and blurriness but when viewing the SD card recording the video was nearly flawlessly. Now the SD card recordings and live stream have visual artifacts, especially towards the bottom of the frame. So it seems to be recording in poor quality as opposed to a live stream with minimal issues and flawless SD and motion triggered recordings to everything is bad. Nothing has changed in my set up other than the weather going from below freezing to above freezing around the time this happened. I have a V2 and Pan Cam and both are doing fine. The V2 is actually in a garage that was below freezing so I figured the V3 would be fine outside, it’s rated down to -4F. Needless to say I am flabbergasted by this as no other camera or IoT devices are experiencing this issue.

If anyone else is experiencing this please let me know. I haven’t found any meaningful way to contact Wyze to inquire to the issue. I have sent emails and tried Twitter but that’s the only ways I’ve found to attempt contact. I’d like to know if something is wrong on their end, is there something wrong on my end, or is the camera defective. I have another V3 arriving on Friday don’t want to stick it outside until I know the temperature change wasn’t the instigating factor as here in Missouri the temp changes are wide ranging this time of year.

I have tried unplugging, resetting, and factory resetting. My modem and router were rebooted and I tried moving the camera closer to the router without it helping. I also tested the WiFi at the camera location and the numbers are the same as the day I installed it. I’m at a loss.

The videos below show a video with deer in snow from 2-15-21 with no stutter or flicker recorded from my SD card on playback. The night vision video is from last night. There is a lot of flicker and distortion, mostly towards the bottom.

The image pulses while the clock seems fine, indicating the rest of the unit is okay. I suppose you could try drying it out or disassembling to check connections, but an RMA might be in your future…

Great. I believe I saw something about their return system being down so this should be interesting. I’m also concerned that you’re telling me to dry it out but this is sold as an IP65 rated water resistant device, the cold and snow shouldn’t be an issue one would think. I guess I will try waiting for their return email and start the process. Thanks for your response.

I was thinking internal condensation. But don’t go by my wild guesses alone. I don’t even have one yet…

If you are interested @carverofchoice recently posted a brief teardown of the unit. Apparently easier to open than the V2.

This thing is barely a month old so I’ll let them deal with tearing it apart. It’s disappointing it only lasted a month if you’re right, I have another arriving on Friday and not sure if I should accept it or return it. I’ve had the Pan Cam and v2 for years with zero issues. I like the V3 but if it can’t stand up to the conditions it’s rated for it’s pretty useless for what I bought it for, watching deer outdoors.

I haven’t tried that yet. I guess I can when I get home. I’m using the stuff supplied by wyze.

Unfortunately changing the power block and usb used made no difference. I tried a few. I guess you’re probably right and somehow condensation got in. I guess I’m waiting on the Wyze tech staff’s email to get the process started.

I’ve noticed I know have a pretty bad glare spot as the sun goes down I didn’t have before.

Thanks for the help and suggestions. 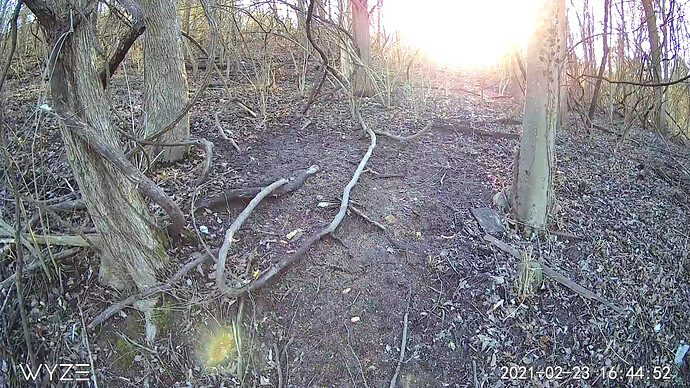 Just an FYI. I received the new V3 and it’s doing the same crap. There was a firmware update a week and a half ago and looking back at clips I think something happened with the way video is handled on their end. The snow on the ground for a week concealed the flicker. Beyond that I’m not sure what else it could be.

That’s weird. I’m surprised no one else mentioned it. If you have an SD card installed, check to see if the problem shows on those clips as well. That would eliminate the servers as a suspect… Those recordings start and end at the camera.

That’s my next project but it’s waiting until Friday as I’m tired of climbing ladders for a few days.

I think I may have found the problem but it doesn’t make much sense. I have the camera about 40ft or so from my router but it has a solid connection and the live stream is connected fully, just rough at times lately. I moved the original V3 from the woods to my driveway mount and it has almost no flicker at all. It’s the same distance or more from the router but the biggest difference is the image is fixed. There are two cars and my concrete drive and a strip of grass, the woods has well the woods. Everything is constantly moving slightly and I think the camera is having a hard time keeping the image steady. While there was snow on the ground and little wind you didn’t see much but now the snow has melted and the wind is blowing through the trees and it’s causing a jumpy feed. I will test the SD card but I think it’s just a case of the camera constantly trying to smooth the feed.

I may move the camera above the feed plot more to catch just the wildlife and ground and less trees.

Thanks for the update. If your theory holds of course, the SD recordings will be smooth. Perhaps there is new interference or the camera is aging poorly. I’m sure you know there is a lot of tweaking you can try with your WiFi placement.

I definitely think the video quality of the V3 is lower than the V2. Take a look at the attached images. 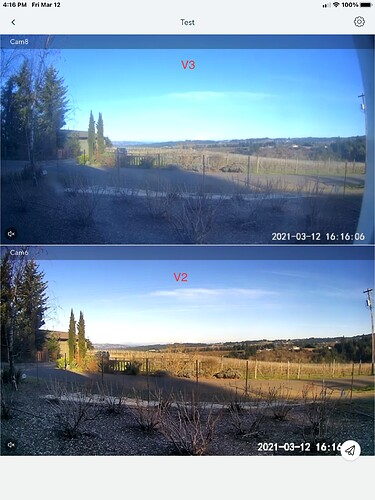 That first shot looks different and there is both a side border and concentric glare in the center. Is it behind a window?

Also, to the OP @bharper0082, I now think your pulsing may be a “normal” artifact of the way the V3 compresses video with updated key frames.

After pulling SD cards from both cameras and trying 2 different V3s I also believe it is visible artifacts in how it handles compression. The direct SD playback on a PC has less than livestream but it’s still there. Not having used a Wyze cam outdoor before the V3, I have Arlo outside, I wasn’t expecting it. The Pan and V2s I use for controlled indoor areas don’t do that. I think the drastic light changes and wind movements is causing it. For the price I’ll live with it, the Arlo are expensive and none offer the true continuous recording I want for wildlife.

The top camera doesn’t seem pushed as far forward against the window? Just based off the position of the electric pole on the right. If it’s inside against a window get it as close as you can. I have mine mounted in a wooden box about 50 ft from my house in the edge of some woods. My image is static and jumping from constant movements in the woods, I’ve tried a couple V3s. I think future firmware updates could help my issue.

Try moving your camera outside and see how it looks, you have a great view there.

V3s I also believe it is visible artifacts in how it handles compression. 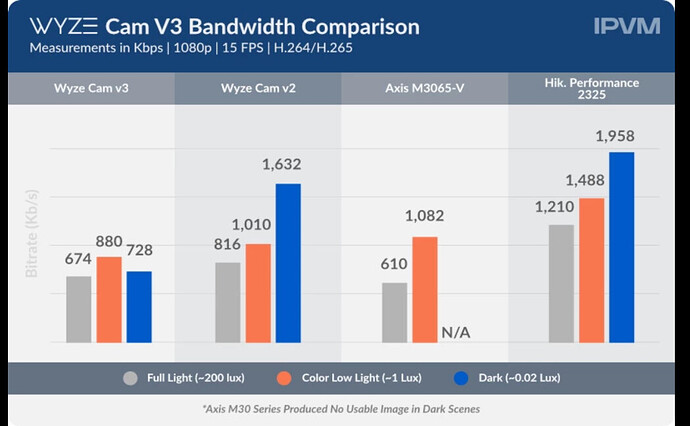 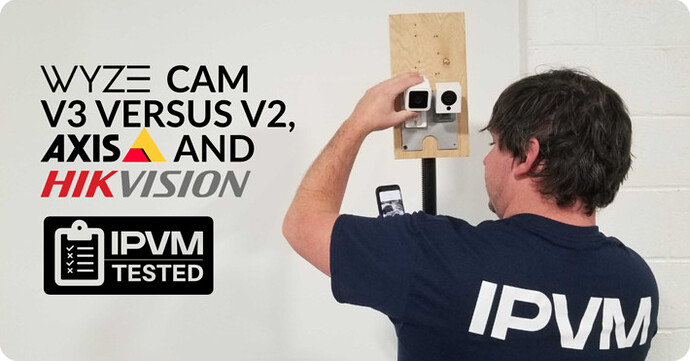 Still just $20, still 80%+ less than competitors, see where it beat both Axis and Hikvision.

Wyze should make adjustments to improve that and add a control if people don’t want the increase in bandwidth. I pay for Gig internet so I’d prefer everything smooth even if it takes a bit more.

Well the ironic part is SO many of us are viewing them at home - no Internet bandwidth at all is used to transmit the video!

How do you figure? Unless you’re using the RTSP firmware on your own local LAN everything runs through the cloud. Which would definitely involve some bandwidth, maybe less on your own network but still something. As it’s transmitted through the cloud to the viewing device.

I haven’t read anywhere that viewing Wyze on your own network is direct connection. I have an Arlo system that has a camera position utility that pushes the video direct from your camera to your phone for positioning the camera so there’s no delay in stream and its only for setup and checking signal strength. I didn’t know Wyze had that ability.