Does new Pan v.2 have a siren or not

Various articles say it does but I don’t see a way to turn the siren on manually using the app. The approach used for cam v.3 does not work for me (no icon for siren) under “more”

Looking at the Cam Pan v2, which I just got today, I do not see any siren as an option in the device settings or on the main page.

However, this is what is shown in the detail area on the Wyze Site:

I will see what I can find.

here is some additional information I just found out from @carverofchoice . So a Siren must be part of the Cam Pan v2:

Just got word from Wyze that they are aware of the siren issue and are now fixing it.

It has a siren, but you can’t directly control it from the app ATM.

Hopefully they will fix this soon.

So, basically, the siren is there, the APP GUI is just missing the easy to access icon to press where the V3 has it.

I personally usually only use the siren with rules anyway, but I know some people would like to easily test them from the camera page.

Great suggestion. I will try that as well.

Confirmed the Rules approach works. I assume Wyze will patch this in the future. Good idea.

Various articles say it does but I don’t see a way to turn the siren on manually using the app.

Wyze is aware of the issue and working on a fix. It should be available in the upcoming v2.25 release.

I don’t see the ability to use a rule to turn on the siren for a black V2. What am I missing?

The evolution of the different camera lines are different. A Pan V2 is a very new camera, with some of the same functionality of the new fixed-view V3. A fixed-view V2 is a very old camera, and did not have the siren. The black V2 was one of those cameras.

Currently only the fixed-view V3, Outdoor camera, and Pan V2 have a siren.

I thought the same thing. Go to that page that you posted the screenshot of and continue scrolling down the page.

I think you are talking about the Pan V2, not the Black V2 (which was the old fixed-view camera before the V3).

There is nothing below what they posted on the Black V2.

Waiting to get mine ! Let me know how it is , I’m very excited to see this new addition

I have the Cam Pan V2 cameras and set up rules to turn the sirens on and off. HOWEVER, I got a 3rd camera and wanted to do the same thing for it but the siren option isn’t there any longer. I see it in the “more” options now and not in the background options (like turn notifications on and off, or turn the camera on and off). The rules I had previously created still work but I’m not able to duplicate it. 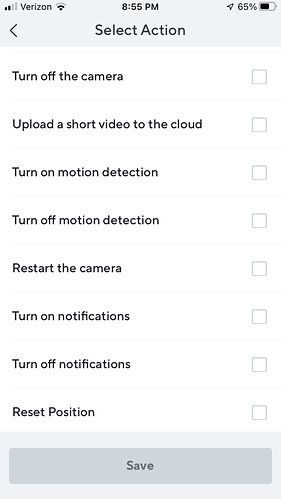