Differences Between iOS and Android Apps

Since I test on both iOS and Android, I thought it would be interesting to start a topic which outlines the differences between the iOS and Android Apps. Currently I am running the following versions:

I am hoping this could be a growing list so that the Developers and PM’s can see the differences and start to standardize or be more consistent on the apps / GUI.

Notification times
Android is on top, iOS on the bottom. 7 second difference

Wyze Shortcuts on the main Home screen
If you look at the images of each. iOS icon image is bigger and more pronounced. Where the Android is Smaller. Basically look at the image in the middle of the circle and compare to the other.

Facial Indent and Captioning
These images show the Account Menu and where you go if you would like to manage Faces. Android labels it as Manage Faces and indents it under services, iOS calls it Facial Recognition and does not indent.

NOTE: I plan on adding more as time goes on, feel free to provide what you all have noticed.

I also have an Android phone and tablet and a &^%$# iPhone. I have noticed differences as well. I will have to add some of my observations. I use the Android phone far more than the @#$%^ iPhone so I will have to pay more attention to the differences.
I have used both for three years and over that time there have been times that the Android app worked better and times that the iOS app worked better. Currently, my impression is that the Android app works better. Far more reliable at being able to see videos.

I also use Android as my Daily driver. But since I had an iPhone, I decided to test with both to provide support within all forum topics. Last night, I decided to set something like this up to hopefully shed some light on the differences and to provide a visual of what individuals could see or experience.

I appreciate you adding content as well. This could go a long way.

When viewing a Live Stream and double tapping on the stream while in portrait mode, Android Stretches the stream where as iOS does not.

NOTE: Wyze is aware of the issue and is currently working on a fix

NOTE: Wyze is aware of the issue and is currently working on an AI fix

When reviewing Recognized faces, I noticed that the Android device will scroll through the faces smoothly and allow you to select each face while scrolling. iOS seems to get stuck with scrolling and then jumps to the last page. the selected faces are not maintained.

I started the app, went to Account and then Facial Recognition.

iOS (Scrolled until Loading appeared, did not continue to scroll)

Here is a video of what my experience is like. iOS is buggy, Android seems to work better in this case

I won’t digress to far because I love the topic @spamoni4 has created here. But I chuckle every time I see your “&^%$# iPhone”. It’s hilarious and you do it every time.

But I chuckle every time I see your “&^%$# iPhone”. It’s hilarious and you do it every time.

Not every time, but most of it. I HATE my #$%^& iPhone. But it’s work issued and I have no choice. When I moved to an Apple product a few years ago at work, my boss (who lives and breaths Apple), said “Give it a few months and you love it.” I think it was a little over a year, and I finally gave in and bought my current Android phone to replace my dumb flip phone that I had carried for a decade or more. Since work was providing me with a smartphone (BlackBerry, then Android, and then @#$%^&) with truly unlimited data and tethering, there was little reason for me to pay for a personal SmartPhone. I HATE the iPhone so much that it was worth the $$ to buy an Android and pay for service for it. I did that when the beloved flip phone died. Having both does give the advantage that I can compare how apps work between the two platforms. There are several that I beta test on both.
Now back to differences between Android and iOS…

Me three! The iPhone is “have to” and the Android is “want to”.

Not coincidentally that is also how the devices treat us.

Good thread idea. I don’t use beta though.

Facial Indent and Captioning
These images show the Account Menu and where you go if you would like to manage Faces. Android labels it as Manage Faces and indents it under services, iOS calls it Facial Recognition and does not indent.

It’s the same for Legacy PD

No ability to Enable Hardware decoder or toggle Running in background on iOS. Pretty sure this is a device thing though and Apple would not allow
Android ____________________ iOS

NOTE: I have the unlimited CamPlus yearly subscription

I Prefer the Devices on CamPlus be listed first.

iOS is on the Left, Android is on the Right
Top of the List 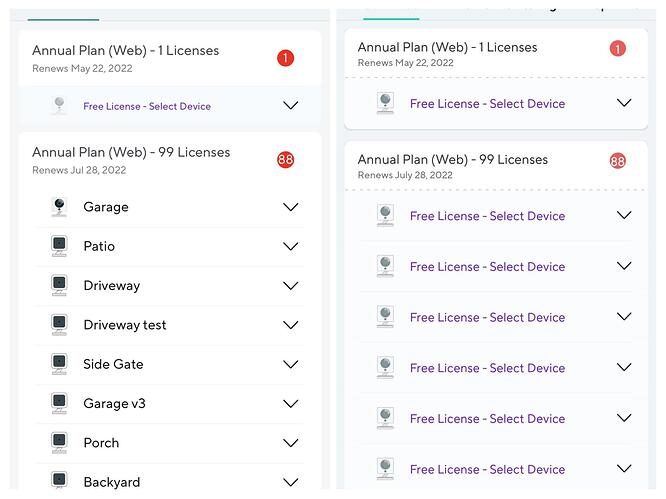 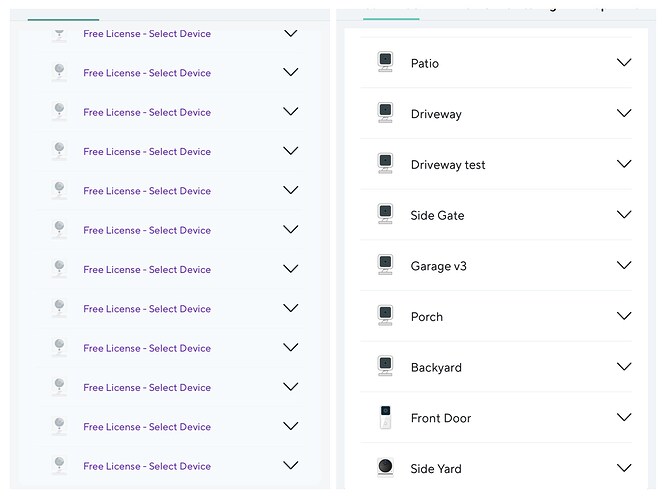 Just looked at my Android phone to answer a question in the forum and it looks like Wyze has updated the CamPlus list to show at the top and not the bottom. Great Job.

When on the main screen of HMS, notices the Monitoring events spacing on Android is tighter than iOS. In addition, the spacing between the Monitoring Events and “Home Monitoring Settings” button is different as well. 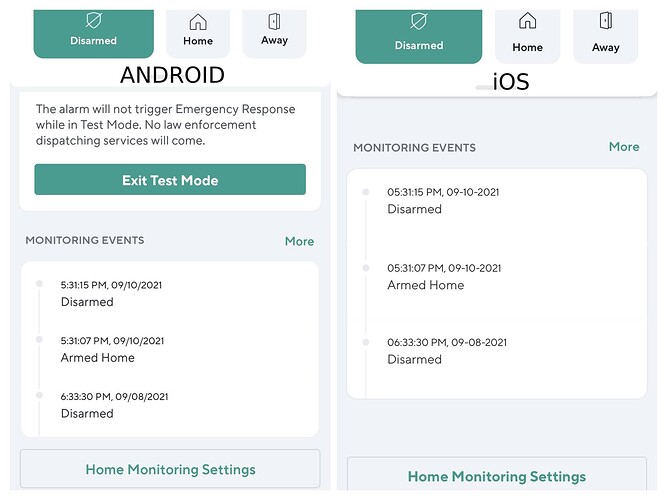 I’ve found that the IOS apps on iPhone & iPad have gotten glitchy only since the last couple updates, worked great before now horrible lags/playback/connecting issues as of late, now my Galaxy Android is slightly better. ALWAYS CRINGE when pushing any updates for apps & esp for firmware, they BREAK MORE THAN THEY FIX 1/2 the time, and fix turnarounds / corrective updates are EXTREMELY SLOW TO COME…. They’re too busy putting out new products most of the time to fix what’s out there already, very frustrating…. I won’t even detail some of the nightmares with Firmware @ the beginning of the year, they basically took cameras out of service with some of the updates…

I understand what you are saying. I will not say I did have my share of problems, but that is what I signed up for. I knew in the beginning that Beta software and firmware can be buggy or problematic. Knowing how to resolve or roll back has helped me.

Wyze staff has been more engaged in these forums and has been assisting with major issues. I personally have seen a marked improvement from Wyze on supporting the beta releases.

At this point, I don’t have any major issues with the App and Firmware I am testing. I know that there are differences between Android and iOS as demonstrated in this Topic, but this is more for expectations of community members and for Wyze Staff to review and see what we, as community members, are experiencing.

Here’s one. Every time a new beta app version comes out, I update both my Android phone and tablet and my %#$^* iPhone. On the iPhone, I have to enter my password first time I open the app after the update. Don’t have to do that on either Android device.

I totally agree about the Apple iPhone. I am prompted every time as well. Gets annoying. Not sure that is a wyze issue or an iOS security thing.

Android is my daily driver which I prefer over the Apple.

Agreed & understood, should’ve mentioned I wasn’t part of any Beta tests, just sharing my experience as a typical user…. & I realize the support team does what they’re able to, it’s higher level decision makers that I’m really speaking to… just hoping they take heed… & yes , for the most part things have improved overall. SC

VDB Event could not play. The Event now just sits, changes the view a bit and puts a green help below where the stream is. However, Android shows no image where iOS does.

Android display when error is found with the event

iOS display when error is found with the event