Here are the release notes:

If you have any feedback, please let us know. Thanks!

The Saturday bug on iPads worked correctly with the new release on iOS. Thank you!

The grey overlay on the event videos appears to be gone in both portrait and landscape. This is using the iOS version on iOS 13.3 Beta 4.

I’ve had my various devices fail so many times with “new” app releases. What is the best way for me to backup my present app so I can reinstall it if the latest does not work?

On Android I use an app called Super Backup, it saves a copy of anything I update and you can reload it

Do my eyes deceive me or was there a slight font change within the app?

No biggie, just making sure my eyes are working

Gray overlay is gone ,I can now zoom in on complete motion capture clips , which I could not before with v2.6.42

Running , Samsung S 7 with Android 8
don’t see any problems yet

Overlay is gone on IOS, zoom works, Saturday is selectable on my Ipad and lock is there! Good work!
Here is a glitch which seems to be i in production version also:
When you set a contact to send notifications when open or close occurs it appears that the history shows open events only. No close events. See photos below: 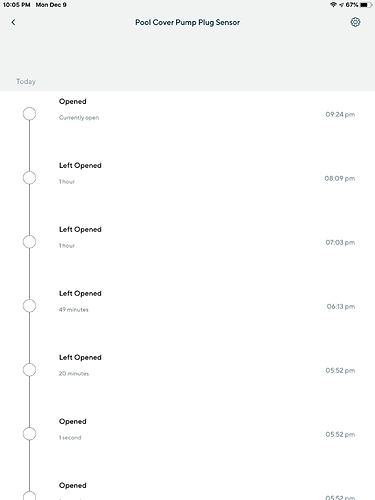 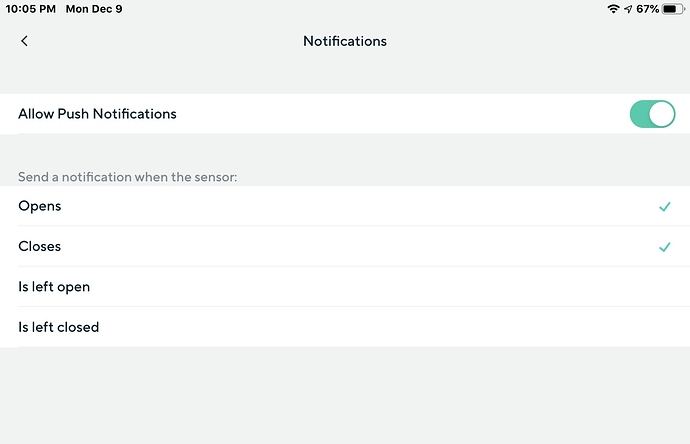 Has anyone tested whether person detection continues to work with the new beta app? I want to test it out, but I’m a little afraid of losing that feature prematurely. Haha.

I already bit the bullet and removed person detection so I am not sure. It still shows up in the services menu.

I just checked all mine and several clear videos with people but no person notification’s.

Thanks for the update. When they announced the removal of this feature, they said that the contract forces them to remove it with the next release. So I wasn’t sure whether that applied to the beta release or not. Sounds like maybe it does.

If you’re pretty consistently NOT getting person detection with the new app update, I’m curious – does that return if you switch back to the production app?

Basically I’m wondering whether I should be afraid of permanently losing person detection prematurely if I install this. Hah.

Person detection is working fine for me. (Android.) I believe the detection is done on the camera and won’t be removed until they release new firmware.
Also, the ‘I saw a person, etc’ share is working again.

Thanks for bringing this up and documenting it so thoroughly! Would you mind confirming your OS and if you’ve submitted a log for us to investigate?

I’ve noticed the same issue on the close history.
I would like to add that the Left Open notification doesn’t appear functional at all. I can’t see anything that it does. I had expected to get notified if the switch was left open for “x” amount of time.
That is not the case.

When all else fails, read the manual.

From the Sense manual:
Events are paired together. Instead of seeing Open > Closed for a Contact Sensor, you just see Open with an accompanying length of time. If the contact sensor is still open, you’ll see it as Currently Open.

So that is apparently the way it works.
I wish it would show the close event too.

Good point about the manual. I either missed that or failed to understand it. Not such a good way of handling things, in my opinion.

Ipad/Iphone IOS 13.2.3. No, I haven’t submitted a log so I don’t have a ticket number. Just noticed it while trying a new project.