I have two Wize Cams V3 with 128gb cards (two diffrent types of cards). I have had both cameras for maybe 1.5 month.

I updated both cameras a few days ago to the latest firmware. Now one of them as of 6AM this morning has GAPS in the continuous recording.

I called Wyze support and they just said 128gb card are not supported put in a 32gb card.

Has anyone else seen any issue like this and do you have any recommendations?

I have 64GB cards in all 30 of my cameras and they do work. Tested a 128GB once for a while, but it was a very high grade card that I normally use in my drone. I needed it back for the drone… Lots of people are using cards larger than 32GB.
This may sound like a dumb statement, but are they really gaps in the recording? In other words, if you play across a gap, is there really missing video? I have seen situations where the timeline showed nothing there, but there actually was. If there really is a gap, pull the card and check on a computer to see if the video files really got recorded.
Last item, what card are you using?

also try removing the card and checking the content on a computer. if content seems ok, then you should be fine. if not, make sure you are using the proper kind of SD card (V30, V60, V90, etc) - high endurance cards are less prone to the sector corruption that tends to happen due to the constant overwriting with continuous recording.

Don’t try to save a few bucks by buying generic cards. You really do tend to get what you pay for with SD cards. SanDisk and Samsung have always been solid for me, I’ve had inconsistent luck with MicroCenter ones. Amazon occasionally has some decent deals on stuff.

Make sure you are properly formatting them as well.

The funny part is that it did work flawlessly for a few weeks. I thought maybe when it got full it had an issue so I formatted it but again it didn’t help. The main thing that changed is the new firmware. I would have thought if it was a card issue I would have seen it in the first month.

It is a U1 card and the one that is working is a U3 card so you maybe right.

On the post I made in the video you can see that when I go to the gaps it has NO video.

First, never say these words, lol. Always say instead what the ‘latest’ firmware is that you have installed. For one thing, there are always 2 “latest” versions. Production and Beta. Also, in the future no one will know which one you were talking about when you wrote this.

So is this one the latest Beta firmware? If so, they have been talking about gaps in the recording on the latest version 4.36.5.58 for the past few days. Also, if this is Beta it should be posted in the Beta section under the version you are running. Here is where they first discovered it:

Updated my 2 v3 yesterday (4.36.5.58) and they are rebooting by themselves each 30-60 minutes. I have just formatted the cards to see if this issue will be solved. [image]

Make sure you are properly formatting them as well.

Don’t try to save a few bucks by buying generic cards. You really do tend to get what you pay for with SD cards. SanDisk and Samsung have always been solid for me,

This is good advice. I switched a couple of years ago and a lot of problems went away.

Every card I get first gets formatted using this Memory card formatter before it goes into a device.

I am using the Sandisk U1 card listed as a good option on this video.
But I do think it is a card issue as again all last night when the camera switched to black and white mode it was fine. At 6AM when it switched back to color it started to have issues again.
Because this is only a 1080p camera a U1 endurance card should be fine. But it looks like I will need to use a U3 on it.

Looks like the new 4.36.5.58 firmware is doing something that will require a higher seed card than previously.

Looks like the new 4.36.5.58 firmware is doing something that will require a higher seed card than previously.

No, the 4.36.5.58 firmware just has a bug, as Beta firmwares often do. Best to just revert to production firmware through a manual downgrade process:

I have two of these cameras so I just put the same U3 style memory card in the one out back and I am still getting the same issue.

It has been many hours now with no gaps! So it was the 4.36.5.58 firmware on one camera was not stable. The really odd part is that another camera bought a few weeks earlier worked fine.

It should also be noted that while many of us do use cards larger than 32GB some process such as the firmware update one where you copy a firmware to the memory card and then hold the reset button on boot will only work with FAT32 memory cards (32gb or less). The 64GB and larger cards are exFAT and can not be used for the firmware updates if your doing them this way.

I have the same issue on one of my v3 running the latest 4.36.8.15 firmware. It started after i upgraded to the latest firmware. I tried formatting and installing the firmware manually. Still gaps.
changed sd card to a new 128gb version… still gaps.
That cam that failed is now a test cam.
And im using a new cam with the old memory card at the front door with the older 4.36.1.10 firmware(latest real stable release

One of my v3’s in de garden updated just fine and has no gaps in the timeline. It all started for me after the web view crap was added…

I havent found a solution and ordering new v3’s for me isnt trivial as i live in The Netherlands and have to pay a large amount of customs and shipping to get them here,

I’ve seen this gap issue for seemingly years. It seems to occur only on my oldest cameras using the oldest microSD cards.

When it occurs, it appears to be a 1 minute gap that occurs about every 60 minutes. This means that it cannot be the result of a user-initiated camera rebooting scenario.

This was a know issue on some beta firmwares. The solution was to go to the standard firmware from the beta at that time. However your not on Beta firmware.

I also had one doing steady reboots that was outside and inverted and water got into the area where the memory card was. However this is really only an issue with inverted cameras.

NOT solved. One of my V3 cameras still records intermittently since the Amazon Server outage. I’ve tried multiple sd cards and reinstalled the camera, but it still records about half the time with random sized gaps all over the place. Firmware 4.36.8.15
This camera worked fine until the outage.

I have the same firmware version on my V3 and have had no issues, using a 64GB card on continuous. Today is the V3’s one year install birthday. 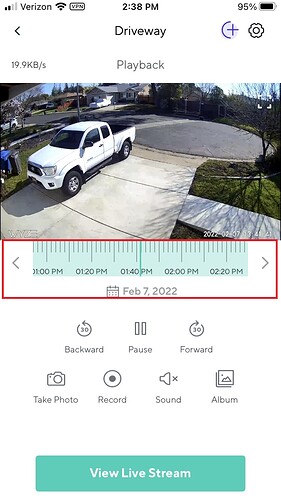 My V3 ran fine for 5 months, but after the outage it gaps. I must just have a faulty camera.