I upgraded to a Netgear Orbi router with 2 satellites. Everything is up and running and I was able to get all 9 of my Wyze cams connected. The only issue is all the cams are connected to the main router when the satellites are a lot closer to the cams. The satellites broadcast both 5 and 2.4ghz. How can I get the cams to connect to the satellites?

Well, a mesh router - most of them - are going to configure the path that is most efficient for the traffic they carry. If they are router and satellites, they are likely dual band vice tri-band. So, the connection to your main router is going to (probably) going to be better for your use than connecting to either of the satellites. That’s because yours are connecting the satellite to the main router over the 5GHz band, even thought the camera would connect to either on the 2.4 GHz band. (The router to satellite path is sharing the 5 GHz band with whatever else you are using the 5GHz band is using.

Thanks, I had wifi extenders that cameras were connected to but since my old router needed replaced I went with a mesh setup which works good for everything else. I guess I could put my extenders back up and try them again for the cameras.

Why are you purposely trying to impede your camera streaming?

I had the extenders with the old router in order to use the cameras, they were too far away from the router.
They are working with the new router, just not as good. I was hoping with the satellite in my outbuilding instead of a extender I would get a better connection

The router to satellite path is sharing the 5 GHz band with whatever else you are using the 5GHz band is using.

On the Netgear Orbi AC3000 routers this is incorrect, its a tri-band unit that has a dedicated 5 GHz backhaul connection separate from the other 2.4 GHz and 5 GHZ band. 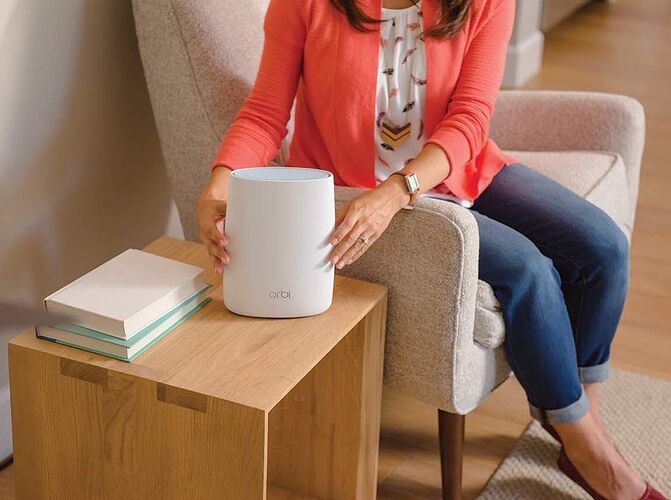 While pricey, the Netgear Orbi is one of the fastest, most powerful routers we've tested, even without its extension.

The satellites broadcast both 5 and 2.4ghz. How can I get the cams to connect to the satellites?

I have an AC3000 setup with 2x indoor and 1x outdoor satellites. At first I got the same thing that all my cameras (V3, WCO, Pan) would stick to the main router. I left the Orbi’s sit for a few days and they reconfigured their own jumps as shown in the Orbi app. After that I randomly restarted cameras and eventually a few of them moved over to satellites. Really no issue with performance on my end but it was good to see it select a closer node anyway.

That’s good news for @nightowl. @SergL When he didn’t say what model he had, I didn’t bother to look at what Netgear was doing. We don’t often see manufacturers make 1 router - 2 satellites a tri-band, when they can only offer a 3 router mesh tri-band and collect more money.

Agreed, and the Orbi’s strength in that was one of the major selling points to me. Been very happy with it.