Do people have a preference on which network one connects their Wyze Cam to (guest or main network WiFi)? Seems some suggest putting IoT devices (including WiFi cameras) on a separate guest network with no access to the main local network.

Really depends on how you want things to work.

Some people like having each device on a different network, so they can keep an eye on what they are doing.

No. Cannot access a/the time laps recording when mobile device is on the main/primary WiFi network and the Wyze Cam is on the guest WiFi network. The router is currently configured to isolate the guest network from the intranet/main local network. 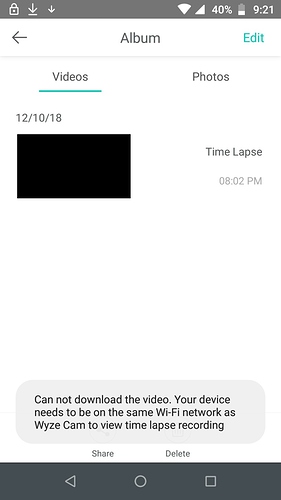 Well, there’s one reason not to do it. I don’t know of a loss of any other features, but I haven’t done much worthwhile with these cameras aside from troubleshooting.

I have my 13 cameras on thier own SSID and Virtual LAN. OK, I admit that I am odd in that I have 7 operational SSIDs on my non-consumer grade WiFi. Each SSID is isolated and the Wyze SSID is MAC restricted so that only my known cameras and my iPhone can access it. The only thing that requires me to switch my iPhone from my “normal” SSID and VLAN to the Wyze SSID and VLAN is downloading time lapse videos and initial setup of a new camera. Other than that, I can do anything I need with the cameras while my iPhone is NOT on the Wyze SSID.

Seems like a lot of interference is possible here.

Seems like a lot of interference is possible here.

Not really. Each set of access points have up to four SSIDs, so there are only two sets of APs. Each set is on radically different frequencies. They don’t bother each other.

I keep my cameras on my main network. But I do have reservations set for them in my router to move their IPs out of my DHCP range.