As you all know to set up the cam V3 you need to have your iPhone connected to the 2.4ghz frequency. Can someone tell me how they connect their iPhone to 2.4ghz on the Netgear Orbi mesh network to set up a cam v3? Anyone who has a Netgear Orbi knows that it uses 1 SSID and the devices connected to it cannot choose the frequency the device uses. Once the cam V3 is setup then it should work fine.

Are you saying you are having trouble adding the V3? Personally, I have never had my phone on the 2.4 GHz network (I’ve even had it on the outside cellular network), and I’ve never had an install problem. I understand some do need to be on that network, but my equipment doesn’t require it. So I’d give it a try first.

Some of the older post on the forum indicate that people with a Orbi mesh networks just set up a guest network on the 2.4 GHz for all their WYZE gear and all worked well. I just have a regular cable modem with an AC1900 router that has a separate SSID for 2.4 and 5.0. so no experience with Orbi or Mesh routers.

That is true, but the Orbi is a Mesh Network which blends the two together. Like @Newshound , I have had no issue. I have Mesh Network and left my phone connected as it was and simply setup my devices. As long as it was on the same network, you should have no issue. I would try this first.

If you did want to have it all on the 2.4ghz, you would go into the settings and activate your Guest Network as the other posts have indicated. However, there will be a setting where you can set it to use 2.4Ghz. But once you connect it to that Network, you will need to stick with it from that point on as it will have a separate SSID and password from your real internal network.

I have the Erro, but there is usually a setting in the router app to turn off 5g in the settings. On the Erro it will disable it for ten minutes, but most routers have a setting somewhere to accomplish this. You might have to dig through the settings to find it. I have had to deal with this on several of my devices. When you find it, give your phone a couple of minutes to readjust to the 2.5g environment before proceeding. Sometimes I had to restart the phone for it to connect to 2.5g. These mesh routers are great but sometimes bring their own headaches.

That is correct and an excellent suggestion. When I had the ORBI Mesh, there was a setting to disable 5Ghz and use 2.4Ghz. This is located on the Wireless Menu Option. You would have to turn off 5Ghz, do your setup and then turn it back on. I don’t believe it will come back on automatically.

But before going through all of that trouble, I would try to set the device up first. As indicated, myself and others don’t have to change anything. It simply just works. Phone is on same network, connect via 5Ghz and the Wyze gets setup as expected.

Thanks for all the responses. I will try and let you all know. I have searched all the orbs options and the closet thing to “turning off” the 5ghz is not transmitting the SSID.

Which model of Orbi do you have?

With the Orbi Mesh you should have an Advanced section, here is an image which I found: 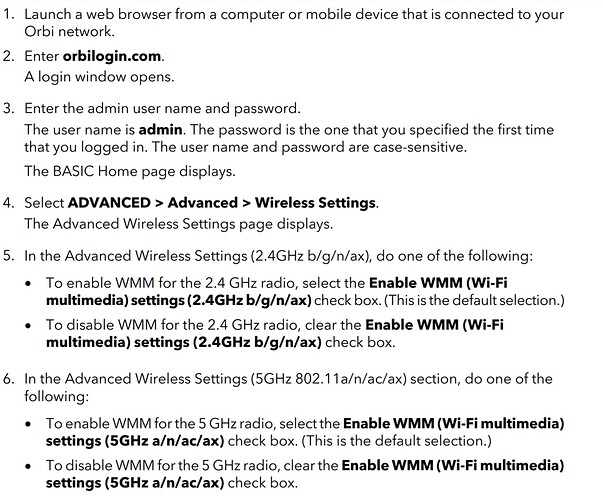 Also, Disable IPv6. I have read that Wyze Products only talks IPv4.

Thanks, looks like the instructions are the same. to turn off the 5Ghz channel, go to the Advanced, Wireless Settings area (step 4) and Turn off 5Ghz (Step 6).

Good luck. I can’t help, you but I am confident a few here can and will.

But my two cents. I’ve been using Samsung WiFi mesh. As served me well, but for some issues once in a while with Sonoff setups, because like the Orbi, can’t id the 2.4 and 5 separately. Finally tired of that, I bought a Linksys AC2300 on sale, and put it between the cable modem and the Samsung. Once of these days, I am going to shutdown the Samsung (when I get Starlink) and go another mesh. But the problem you are having is why I added to my existing and why I will be careful which mesh I buy later - just so I can separate the 2.4 and 5 nets.

incidentally, Two of my Wyze cams and two of my Wyze plugs dropped off line when I shut my network down and brought it all back up. Could not figure out the problem. Then looking through Linksys IP assignments, I noticed the two cams and two plugs were not offline, they had come back up on the 5 GHz net - on their own. My Linksys 2,4 and 5 are named differently, but the passphrase is the same. Hmmm, I didn’t know that could happen.

Point is now, sometimes an offline device is not offline, its on your 'other network". Be aware

@Newshound, you said above you’ve never connected your phone to your 2.4? Are you using all your Wyze on 5 GHz?

@Newshound, you said above you’ve never connected your phone to your 2.4? Are you using all your Wyze on 5 GHz?

No, all my Wyze devices are on 2.4 GHz. You may be the first person I hard say they got a current Wyze device connected at 5GHz. I’m sure Wyze will move in that direction when they can, but I’m pretty sure the cams and plugs they currently sell are not there yet. Your router may have assigned them to the 5GHz net (I also wonder how that happened with different SSIDs), but they didn’t appear to be working because they were offline.

In my mind, it shouldn’t matter what network your phone is on during setup. A camera reads a QR code and uses the information to connect to your 2.4 GHz network. From there it contacts the server, and registers itself. You see the result on your phone, who also gets it from the servers. So until the camera starts streaming directly to your phone, it shouldn’t even notice your phone is on a different network. And mine streams to my 5 GHz devices all the time.

Still some people have trouble, so if you are having trouble, make sure your phone is on the 2.4 GHz net.

But you said your phone had not been on 2.4 I guess then, you don’t use your phone for managing/adding IoT stuff? I have a $19.95 Tracfone from Amazon prime that use for IoT most of the time. No cell service, so avoids those issues. Cool thing about WiFi only phone, no cell service, still have phone service with Google Voice app. (Hint, hint - ya’ll)

Yes, they did not appear to be accessible to me. I didn’t want them on 5, so I didn’t try. But I could have used the phone, logged off 2.4 and back on 5 to access them. I thought I was reading the net name wrong when I saw them in the Linksys router details.

Frankly, even though 5 will give us faster over further distance, I won’t use them on 5 when we can. I put my TVs on 5 to take advantage of the speed and reduce buffering (well eliminates buffering). So with IoT on 2.4, good.

Hmm in my mind, it should matter what net its on. Some stuff, like Sonoff for instance won’t join if 5 is interfering with setup. Good to do same thing/procedures all the time, so muscle memory makes sure you get it right and don’t have to retrace your steps looking for duh, what did I do wrong.

But you said your phone had not been on 2.4 I guess then, you don’t use your phone for managing/adding IoT stuff?

I add all my devices with my phone. I’ve even added devices when my phone was on the outside cellular network. I don’t have issues.

I wouldn’t expect the devices to try the same password on all networks in range. I’d expect it only to try the password with the SSID you typed in.

As far as you not doing it, that is totally possible. If your phone is on the 5GHz band, then when you get the ‘enter network name & password’ prompt, it will auto-fill the name box with the network your phone is on (the 5 GHz network). If you don’t notice and change that, then both having the same password will make the router attempt to add it to that band. Maybe that’s why it showed as connected to your router – it assigned an address and a place on the 5GHz band, but the camera couldn’t actually communicate there.

That’s why I always thought they told you to put your phone on the 2.4 GHz network - to make that prompt show the right network, and not depend on you to change it.

I read here folks say 'Wyze this is offline. Might be offline 2.4 but online 5 and we are not on 5 with the phone

The 2.4 GHz band and 5 GHz band are just two ways to get to the same network. They don’t have separate sets of TCP/IP addresses. They are just 2 paths to the same common network.

I don’t understand why people think 5.0 is so great right now. Yes it is faster but the range is much shorter than 2.4. Maybe that will change in the future? I can use 2.4 50 + feet from the router but had issues setting up a Roku device for a TV less than 20 feet away on the 5.0 it showed low signal. It works great on 2.4.

Good point! An 802.n single-stream network (like the devices Wyze use) is capable of a maximum 150Mbps, with an estimated real-world throughput of 99-100 Mbps.

So move high bandwidth devices to the 5GHz band to keep the 2.4 GHz band available for our low-bandwidth cameras, lol.

I don’t think so. These came up on their own after I had shutdown my 4 routers. Brought the Linksys up first, and that’s the one these connected to before the Samesungs were turned on. Wasn’t me.