After many attempts to change my camera names, I thought the button didn’t work, until I accidently clicked on the current name text and it popped up the name dialog. I think most users will expect to be able to click anywhere on the menu option, not just the text. I think it used to be like this before (at least the non beta version).

I click on the settings gear icon when in live stream on the camera in question, then Name. Are you saying this changed on the Beta app (I am not running Beta at this time).

I’m running beta on IOS and it’s just as it has been. Settings gear, anywhere on the name line and the change dialog appears.

same here on the Beta

On both the beta and the production app clicking any where in the yellow brings up the rename box. 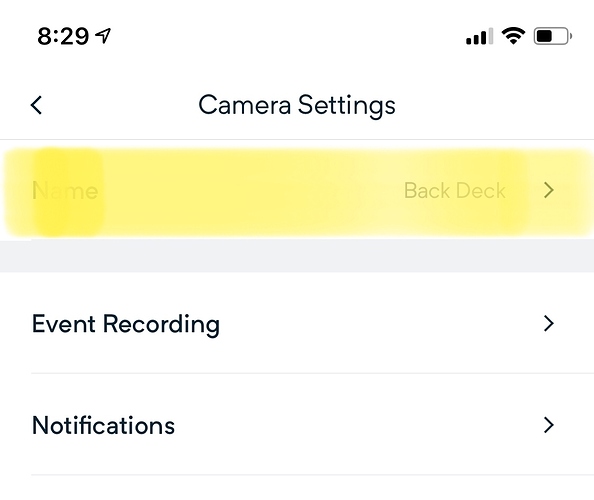 This is a standard not just in the Wyze App but pretty much any app. Are you saying this is not working for you?

Yeah. I forgot to mention I have Android. But in the beta app, you have to click the name text, where you used to be able to click anywhere in that area like you said. It works for changing group names, but not camera names. It also works normally for changing sensor, plug, and bulb names.

App V2.5.36 is the same on my Android device, you have to click the name text

Yep for Android you do have to click the name text. It’s hi-lighted in the weird bluish green Wyze uses.

Is there any other way to report bugs like this?

Yes, if you are using the production app vs the beta app you would fill out a support ticket here.

You would do the same in Beta but you could also report the bug on this site in the beta section.