Cameras showing as offline in the app but the video stream works, just nothing else?

I have 10 wyze cameras, and recently a v2 and a v3 have been showing up with the crossed-out cloud icon indicating “offline” in the app. However, if I click them, the live video stream works just fine in HD… nothing else will work though… I cannot upgrade the pending firmware, I cannot power the camera on or off (while in the live stream, more=>camera off pops up a “camera offline” error). I submitted logs and was told to contact support with the log ID… I contacted support and was told they don’t do anything with logs… and then got the usual runaround of “well, let’s factory reset the cameras”. What do I do now? I’ve power-cycled the cameras, but really don’t want to go through the hassle of factory resetting 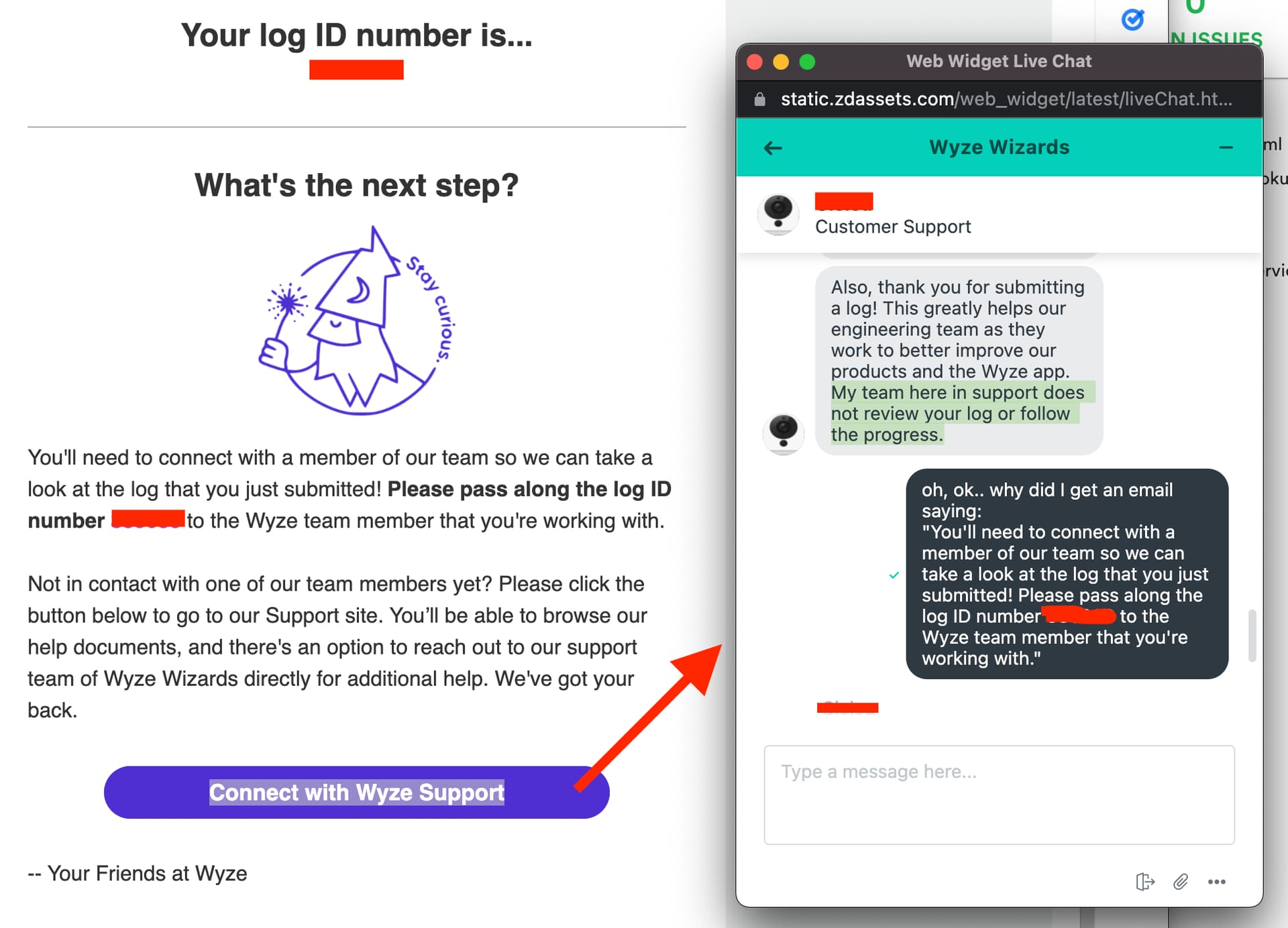 Darn, seems like this is only new behavior for me - This really needs a fix, Wyze! I just bought the floodlight on release day too and that’s been nothing but buggy for me as well

Exact same issue cam V3 randomly says offline but can see Livestream and it records clips just fine. Usually power cycle will resolve this but it’s anoying as it undermines my confidence in this otherwise great camera. And yes the camera is updated to the latest firmware and I am using the latest version of the app. This has been an issue for months

Note: Only the v3 has a pending upgrade, the v2 shows as up-to-date…

I have had luck with unplugging the camera for 30 seconds and then plugging it back in. My pan cams have this issue occasionally.

For the cameras showing offline but working the only fix I have seen so far is to unplug the cam and p[lug it back in, then it will appear online and you can update the firmware if there is an update to do. I hope they find a fix for this soon.

@WyzeBaohua says this should be fixed in the v2.28 release of the app:

No one can help me camera offline but it's not Cameras

Thank you so much for DM me. We are in progress solving this issue and we have identified the root cause. The plan is to solve it in the app v2.28 release. Thank you very much.

Any idea of the timeline for that release?

2.27 is the current Beta, so it may take a few weeks at least for 2.28 to go thru Beta and bubble up to production. But don’t quote me on that; I have no idea when.

But if you are a Beta tester, be sure to test this when the 2.28 app comes up for test.

I had the same issue with my v3 two days ago. Next day, my camera appeared as “offline” in the app, even though I was still getting notifications. After troubleshooting steps, nothing helped. When I deleted the camera from my devices and added it as a new device, the camera would not scan the QR code, except once. The one time it scanned the code, the app said the connection failed due to network connection error. I called Wyze today and the support rep had me download a third party app to check the connection with my WiFi and the camera - no issue detected. I asked if the problems were caused by the latest firmware upgrade. She said it sounded like it and then offered me a replacement camera, which seemed unhelpful, since it’s likely the camera is fine but the firmware upgrade is causing the problems.

She told me I can get my (one) warranty replacement now, so I don’t have to wait on a firmware update to resolve the issues with my current non-working camera. I’m going to contact Wyze Monday to see if there’s a better fix than having to get a replacement after three months. I don’t want a replacement turning into a paperweight the next time I update my firmware. The rep then tells me to submit logs so engineering can incorporate that information into the next firmware upgrade. After seeing your post, I’m irritated the company support tells me to submit logs if it doesn’t even read them.

I hope your cameras don’t have the same issues as mine.

I deleted my v3 and tried reinstalling it as a new device but it won’t read the QR code.

I’ve a couple of V3 cams over 900 miles away, when they go offline I can’t physically access them and entire house power outages has not reset them, while V2’s at the same location just keep on rebooting fine.

I have 3 out of 4 v2 cameras that show as offline but are infact streaming. Along with that none of my 7 wyze bulbs (2019) can be controlled from the Wyse App anymore and only 2 show as connected but controlling them from the Wyze app does nothing. Definately not ready for prime time. I have had my setup for at least 3 years and quite often have to debug devices not working by powering down, deleting devices and re-adding with varying success. In this most recent case (think it started today) Out of my 4 cameras, 7 lights and 4 plugs all I have left working properly is 1 camera. Could take hours to get everything working again although so far I haven’t had any success… ugh…

An Amazon server outage has been occurring all day, which is affecting all Wyze products.

12/16/21 3:35 AM PT - Thank you for your patience! At this point, the majority of Wyze devices have reconnected. We see that some have not successfully connected with the cloud since the initial outage and these devices may need a bit of help. If your device still isn’t connecting, please first try power cycling the device (removing the power or turning it off and then turning it back on). If that doesn’t work, you may want to try factory resetting the device to restore connection. A factory res…

Wouldn’t it be nice to be notified via email that Wyze is having issues? I’ve tried to reset my plugs repeatedly today (they are blinking blue, some working, some offline) and it’s only coming to the forum I learn it’s a problem with a server. I’ve also played with my cameras which are saying offline on the home page but if I click on them, they appear to be working. If my furnace goes offline, I am notified by email. About the time I’m ready to ditch Wyze, I’ll have two good months restoring my faith. I seriously think it’s time.

I was notified twice today by email, but I understand it could have used better distribution.

I did find I had an email but it only addressed the CamPlus Service. No mention of the plug-ins having issues.

I had the same issue as OP several days ago. Since Wyze has always given me intermittent problems, I get used to these issues. The problem cleared up on it’s own yesterday for me without any input on my part.

Everything was up and working for me today without having to fix or reset.