Finally installed a smart switch to schedule our front porch lights. Was hopeful Alexa could turn it on when our WYZE camera detects motion. But only the WYZE door sensors appear in routines as an option to trigger something else. All cameras are active in Alexa.
Anyway to get this to happen or even anything Alexa can do with WYZE cameras?
Switch is tplink Kasa.

I use regular V2 cameras to trigger my Wyze Bulbs. I have it set up so that my inside Wyze bulbs turn on when the front or back door cameras detect a person. I also only have it scheduled during nighttime hours (between 10:30p-5am or so). Pretty amazing technology for $20 cameras and cheap bulbs. 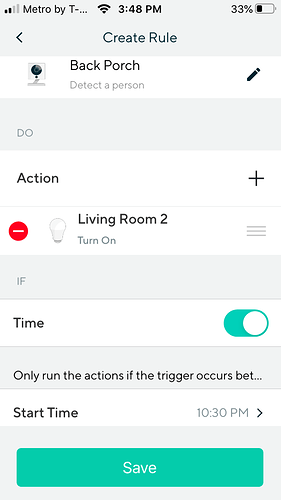 So I guess it will only work with a WYZE bulb? well that’s not going to work then.

You could probably do this through IFTTT if the switch is supported there. What brand of smart switch did you install?

That’s what I was hopeful to use IFTTT, but would I need something in addition to Alexa? The switch is TPLink Kasa which supports it, but I’m guessing these cameras do not unless you have all WYZE products? I can use Alexa to make the lights turn on if a WYZE door sensor is triggered. But it will not list the cameras. Looking deeper in Alexa the cameras are listed and connected. They just aren’t available for any routines.

Maybe I just need to learn more about IFTTT?

If i am understanding correctly you want motion from a WYZE cam TPLink switch that controls your porch lights. If this is correct you do not need Alexa in the mix at all. You would set up an IFTTT applet with the IF part being when WYZE cam detects motion and the THEN part being turn on TPLink switch.

That would turn your light on with motion, but it would remain on. To achieve turning it off you could set up an Alexa routine that when the TPLink switch turns on it will turn off after a certain time frame.

Thanks!
Alright I was able to create an applet. Now if I could only limit the time of day it works. Wish I could make an applet, if this applet happens then 5 mins later that. I see time of day can do something every 15 minutes but I actually want them to stay on from dusk til 10 pm. Trying to get them to only turn on from 10-dawn if triggered. So close. Maybe I just use this app instead of constant on dusk til 10. Might work if I can turn of the camera motion Dawn til dusk.

Ifttt can toggle the lights, but that might be too quick. Wish could do 5 mins. Guess I could schedule switch to turn off every 5 mins from 10pm til dusk as a work around. Then at least if kids play with it, only on for 5mins.

Alexa still won’t let me do a routine with WYZE cameras or the switch. Ugh. Even connected Alexa to ifttt after it prompted me, but won’t show in Alexa.

Alright, I limited my camera motion detection to 7pm-7am.
In the switch app I have it on Sunset to 11:15pm and scheduled OFF every 15 minutes until 7:05am.
that filled its available schedules.
So applets 10:15pm until 11pm every 15 minutes OFF.

Now my lights are scheduled ON from Sunset til 10:15.
From 10:15 until 7 if the WYZE motion IFTTT the switch lights on, They will only stay on for 5 minutes or less. Whew Goal achieved.

Well that was short lived. Forgot that turning the lights off also triggers motion detection, which now would turn them back on haha.

I have a trigger set exactly like this but it doesn’t seem to work at all. It DID work if I set it up through IFTTT but I wasn’t happy with the delay.

Hi Wyze Community. I installed my Wyze cam and have scheduled an automation to switch on the lights when it detects motion however it doesn’t follow the command.

That’s weird! It looks like you set it up right. The only thing I can’t see is the day and time restrictions. I have mine set between specific hours of the night. You can also select what days you want it to run. If those times are set up right, I would try deleting the rule and starting over. I’ve been using a similar rule (but only between hours of 11pm to 5am) for months now and it has worked perfectly.

Is there a way to turn on the lights for a short time and then turn them back off? I’d like to turn on my driveway lights for just a few minutes when it the camera detects motion.

That’s a good question. I’m actually not sure. I’ll try to remember to play with it today to see if I can figure it out before I let you know. Maybe someone else on this thread will have an answer right away?

@mssebourn
It works to a point, when the lights turn back off it will detect the lights turning off as motion due to the pixel changes, unless you have the lights turn off during the 5-minute cool down so it will not detect motion causing the light to just repeatedly go on and off.

I see where this would turn the light on, but is there a way to just make it flash or turn back off after set number of seconds?

Wyze has is a new trigger… see below 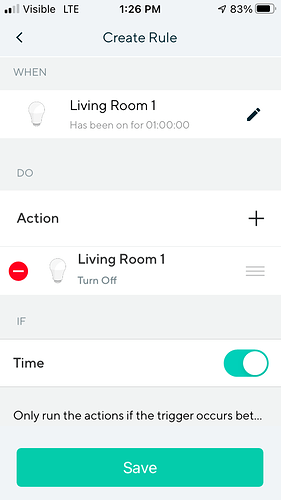 image640×1136 41.8 KB
! You can set the light to turn off after being on for a certain amount of time (and you can even set this trigger during a specific time of day.). For example, I am a light bulb triggered to turn on when a person is detected on the front porch (during night hours). I could set another trigger that turns the light off after being on for 1 hour during that same time frame.