Good morning all, I recently received the Cam OG and have set it up. Picture looks much better than my V2 outside. I have however come across some rather frustrating issues. I tested the alarm out, and when doing so it does sound the alarm, however when pushing stop I am unable to do so and the countdown continues. When reaching 0 the camera essentially is frozen and then switches to “Loading Live Stream” and then says “This device is offline.” I have also found that when attempting to utilize the 2 way speaker mode it does the same thing. I have to go outside, unplug the device and then plug back in. Very frustrating! Any help would be greatly appreciated.

Are you powering the camera via long power cord? That sounds like a situation where the voltage drops enough when in a high current situation (speakers and their amp running), that the camera can not longer communicate.

Yes, I agree with the low voltage concern.

There is some good advice in this thread about using long cords:

So you need to run a long USB power cord to power a camera or device. Here are some things you should be aware of. First, the longer a cable gets, the lower the voltage that will be available at the end of the cable. At some point, the voltage will be too low for the device. Also, the higher the current required at the device, the lower the voltage that will be available. So higher-current devices need shorter runs than their peers. The USB spec asks that all voltages be at least 4.75V. D…

I highly recommend reading it.

Additionally, make sure your firmware and app are up to date.

If you’re using the Wyze cord, Wyze Adapter, and have the firmware and App up to date, definitely contact Customer Support. Though I am guessing it’s a long third-party cord with lower power affecting the cam.

I use a 20 ft USB cord for my OG and so far it’s working fine. Just tested the siren and 2-way speaker as well.

I did notice OG’s live stream takes quite a bit longer to load than my V2/V3s, not sure if that’s power-related.

I did notice OG’s live stream takes quite a bit longer to load than my V2/V3s, not sure if that’s power-related.

I hope so, because if it is not related to your 20’ power cord then someone is fibbing about how much faster the OG’s livestream.

Keep in mind not all cords are created equal.

One person could have a fairly long cord that holds a charge fairly well, while someone else has one that is shorter that does not. Same with the power block as discussed in the link above. The voltage/Amps have to be tested to know for sure if enough power is reaching for all features to work well. Some things might work well with very low power, and other things cause problems depending on the power needs. It can be really hard to tell what will work or not when 3rd party stuff becomes involved.

Slow load may be placement related. My OG is my fastest load time. But, it is very close to my LAN base router. My only closer cam is my PanV1, but it is slower due to the older FW. My distant cams (V3 and PanV3) have a really low RSSI and take much longer to load although the PanV3’s are faster than the V3’s. My V3Pro is my second fastest load time and it is closer to my satellite node than my OG is from the base.

Thanks @SlabSlayer, I think you are absolutely right. My OG is the camera farthest from the routers and only has 2 out of 3 bars signal, while all other cameras have 3 out of 3. Unfortunately I can’t move the OG due to its strategic placement, but if this bothers me enough I might move one of the routers a bit closer.

i do not see motion tags on OG camera , they are on PAM V3 but not on OG
both have CamPlus… 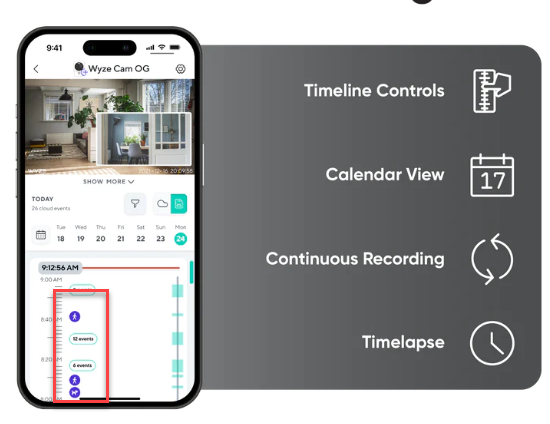 I just checked mine and I confirm that I am not seeing event tags in the Playback timeline. I think it might be either a bug with the latest app or firmware (possibly something they can fix on the backend too, IDK). Hopefully Wyze can fix that up soon. I do see those event tags in my V3Pros, so I know the new interface supports it.

i hope its a bug soon to be fixed , or they going back … i was going to replace all my outdoor V3 (not Pro )
but without tags i have no use for them…

I just checked mine and I confirm that I am not seeing event tags in the Playback timeline.

I’m going to ask maybe a stupid question. What do you mean by event tags in the playback timeline? All of my cameras are set to continuous recording to the uSD card so the timeline is continuous pale green. I’m talking about the “older” interface as I have not really done much with the “newer” interface - yet.

What do you mean by event tags in the playback timeline?

I mean the part highlighted in red: 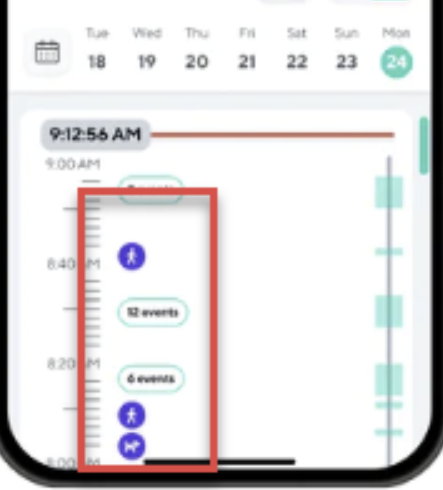 I get those in the V3Pro, but not with the OG at the moment. I think it is a bug.

Oh, something in the “new” interface. As I said, I have largely not used the new interface, and never for events.

By the way, I ended up changing some things on the router which made my OG load up Live view so much faster! Even though my OG still only gets 2 out of 3 signal bars, now it’s on par with my V3s, and faster than my V2s, all without moving router/camera around physically.

Here’s what I did:

Hope this helps others with router issues.

Those are good settings tips… If the user’s router supports them. What brand/model system do you have in use?

ASUS RT-AX86U AIMesh. With Fios. We kept losing internet during the pandemic with everybody on zoom, and this made a big difference.

Honestly I think the one that made the most difference was binding to the closest router. The QoS might help when everybody else is using the Internet.

It is odd that the Mesh didn’t automatically switch the cam to the node with the best RSSI. When I was using a Archer A6 Mesh previously, I had to disable QOS to keep it from dropping devices when they were off or throttling back non-priority devices when I needed them.

One would think so, but somehow priority seems to be given to the main (landline) router and all the Wyze cams were connected to it instead, even though it’s all the way in one corner of the house. Even my nest doorbell is connected to it.

I don’t have high hopes for QoS given all the negative stuff I read about it, but will see if it makes any difference when everybody else is on the Internet.