My HVAC is compatible with the Wyze T stat. Checked that.

I installed it via the app, and it said I needed the C wire module on my air handler. When I installed that (picture attached), I noticed that my HVAC does already have a C wire present and I disconnected it to install the new C wire from the Wyze C wire module.

After install, the fan runs constantly. No heat from the heat pump, but there is heat from H2 (propane backup). No A/C. So, the air handler is “working”, but the heat pump or A/C do not. 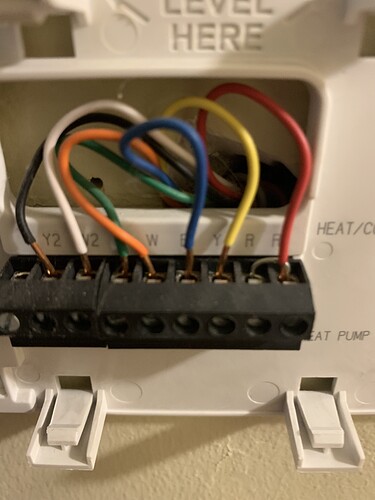 Here is the pic from the furnace control board. 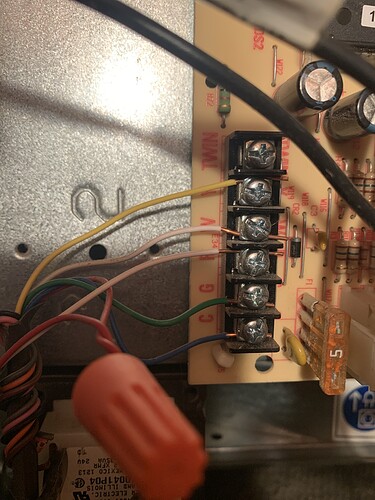 Here is a pic of the entire control board 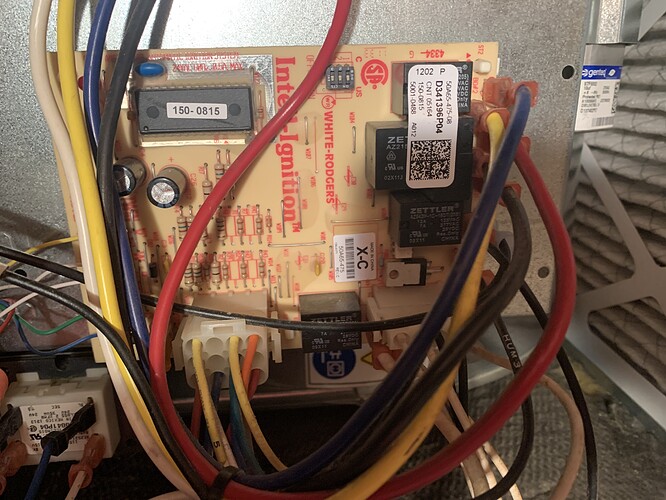 There are unused wires that can be utilized.

note, remove the c wire adapter, you don’t need it, reconnect the blue wire on the control board to C. On the old tstat it’s labeled B. Heat pump (orange wire)is O/B but it’s labeled W on your old tstat.

Thanks, Ken! I’ll reinstall it after lunch. I’m grateful to not have to reinstall the C wire adapter as the air handler is in the crawlspace. I put the old t-stat back in last night. Can you be more clear as to what wires I should place where?

I assume that since you re-installed the original tstat, that the wires on the control board are back to the way they were prior to the Wyze install.

look at the screenshots I posted & use those selections during setup.

your pictures dont show the orange & black wires at the control board. normally I’d say follow the original tstat wiring & not the color of the wire but you stated you have a heat pump which is typically orange. your control board shows a white wire on W but it’s on W2 at the tstat, so I’m not a 100% sure this is correct but give it a try.

Ken, thanks so much! Got it working! Wow…

First, I wonder why the app suggested that I install the C adapter…it did not need to be used…thanks for that!

I appreciate the help!

since the blue C wire on your original tstat was labeled B, I’m guessing you told the app you had B instead of C, which prompted the app to say use the adapter.

glad you got it working

So, I have a heat pump with propane backup. The propane comes on in one of 2 scenarios: If it is below 29 or so degrees outside. Or, if you move the t-stat up more than 2 degrees. I want to avoid using propane as much as possible.

When the programming in the t-stat comes on at 5:30 AM and tells the system to increase heat from the 64 set overnight to the 68 we want the house at during the day, the aux heat (propane) comes on.

Can I tell the system not to use the aux heat (propane) if there is only a 2 or 3 degree variance?

I don’t think the app has that capability. Is there a way change the propane system?

The aux heat on this thermostat is a mess. There are a bunch of other posts about it. I have electric strips for aux heat so really want to avoid using them. What several people on here (including me) have discovered is it appears aux heat kicks on after a set amount of time, not a temp differential. Mine will kick to aux at the end of just about every heat cycle, even if the temp is reading the set temp or 1 deg below. This is a major issue for me in that it will cost me $$$$$ in electricity. It’s been a month with no resolution from Wyze (or even any response that they realize it’s an issue) so I initiated a return request. Between this issue and the wild temperature swings people are seeing, it just seem this wasn’t ready for prime time yet.

I have the temp set to 28 degrees on the heat pump. That is where the aux heat should come on (propane). The propane is coming on nearly every cycle now - towards the end.

Here is a pic of the current wiring on the Wyze: 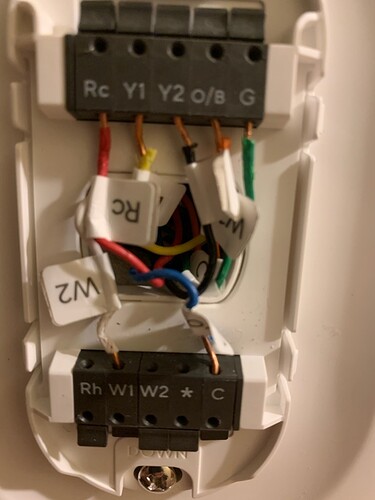 Same wiring as mine, same issue. Seems that’s the way these work with a heat pump, which is less than ideal. In 2 months with the extra money this thing would cost me in electricity, I could buy a smarter smart thermostat.