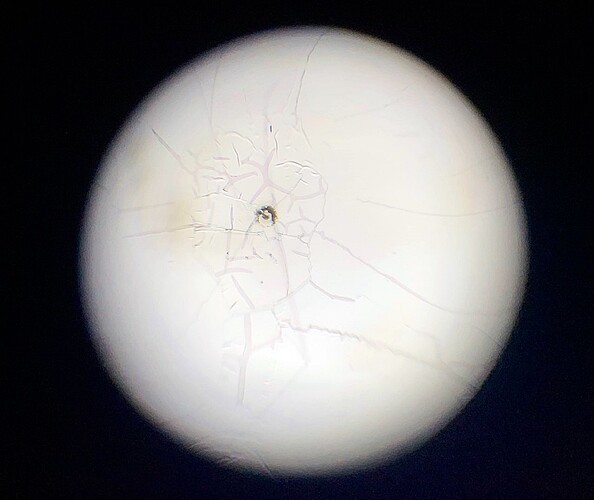 Take a look at the attached photograph. No its not some distant icy moon, its the lens of one of my V3 cameras taken from the inside, looking out.
No wonder the picture quality was poor.

Welcome back Jen, it’s been a few months since we’ve seen one of your cool video submissions.

Looks like the lens took some physical damage at some point (I assume those are cracks and not just some kind of stain?). Has the quality always been off with this cam, or is it more recent that you started to notice something was off on this particular cam? Any idea what the cause could be? Did it fall down or something? It looks like it had a very precise impact just to the upper left of center where everything else splinters out of.

Either way, your instincts were right about needing to check out the lens in this case.

No impact damage that I am aware of, this was my original outdoor V3 which worked fine for several months but then suffered from water ingress. I dried it out but the image remained blurry. I decided to take it apart and see if it was repairable and this is what I found.

Interesting. Did the water damage happen in the winter time? I wonder if freezing water could contribute to something like that.

It’s hard to tell but it almost seems like there is a little bit of some kind of clear film over the lens that bubbles up in a couple of places. I wonder if there is a separate outer layer of something that could be removed to clear it up.

It’s probably better to just try to get a different lens, but I wonder if something like windshield filler would do anything. My brother-in-law used some kind of stuff on a windshield crack and it seemed to make the entire completely disappear as if there never was a crack. I would’ve never believed it. But for something like a lens, I don’t think it would work as well because the high definition up close like that would be hard to hide when magnified.

What are you plans from here? Going to look at other lenses or do you have ideas to try to clear it up?

It did happen over the winter and it did experience some heavy rain, I can’t remember it being cold enough to freeze at the time but I may be wrong.
At the moment I have the camera free of the circuit board, now I have to unscrew the lens from the camera. It appears to be glued in place so I’m going to try some localized heat to see if I can get it to come off.
I’ll post some pictures if I find anything new.

About half my outdoor V3 have done this over time within a year. Water gets inside the lens and will not dry and shows spots / blurry picture. Wyze just replaced the most recent.

I probably should have done that too but curiosity got the better of me.