Can we get an “autoupdate device firmware after X days at Y time?” Something with at least a few options?

Some users want to manually update. Others (like me) want an auto update. With that being said, I don’t want an immediate update. Wyze has too many issues with stability and bricking devices. How about ‘auto update after 7 days at 3am?’ Or auto update at a specific frequency.

First, let me say up front that I am aware that there was already a feature request which made it into production about two years ago for a Bulk Update option on the Firmware Update screen. This addition has been great, but I would like to see Wyze take this a step further.

My wish list for this feature would be as follows:

In this day and age, it makes sense to be able to opt into automatic updates for both security reasons and convenience. Please make this happen!

Automatic firmware updates to Wyze devices would be really great and I hope this is something Wyze considers in the future. Having to manually go into the app and update them (even though they can all be done at once) it a little annoying. Not terrible but I wish that they would be automatically updated.

Hey folks. I’ve moved this request to our Roadmap!

I can confirm that our app team is working on an option that will allow your devices to install firmware updates automatically. We’re also looking into related “quality of life” features including installation scheduling and notifications about install status.

Since it’s still pretty early in development, we don’t know when these options will become available, but we’ll let you know once that changes!

@WyzeKenny - At the same time could the app team reinstate “firmware rollback” option instead of having to do the manual flashcard swap.
I just upgraded 2 V3’s that after the upgrade I can no longer view on one device.

For sure please make automatic fw updates opt-in. I prefer to update one device of each type before deciding to update the rest. Thanks.

@WyzeKenny Thanks for the update! Happy to learn it’s on the Roadmap. I have a over 20 devices on the Wyze Ecosystem (including locks, security system, cameras, etc) so definitely looking forward to some of these features. I have 6 cameras set up for 24/7 recording. I hate having to manually push updates but I have this (possibly irrational) fear that they will all be updating at worst possible time when someone is breaking in. Would love to see an option to update at a specific time of day that I know I’ll be home (or maybe location triggered?).

Per the initial post, a “rolling” update would be beneficial. For those of us who have over 20 Wyze devices in our system, there may be a data “logjam” at the router if everything tries to hit the update at the same time resulting in failure to update or inability to reconnect. Seeing it now.

I do not want Automatic update, how do I STOP it? Just realized you pushed latest update on all my cams which broke my setup, now I have to manually go around my house to downgrade.

How do I STOP automatic updates?

Automatic updates is not even a feature yet lol, you must’ve done it by accident or someone else with access to your account did it.

Automatic updates is not even a feature yet

Yes, they announced they would force the (unnecessary) updates in the middle of the US winter, they did so, and they broke some people’s cameras including one of mine.

Hi, folks! Here is a copy of an email going out to everyone now. It’s really important so make sure you read it! Terms of Service and Security Updates: Update your firmware and app to the latest version to best protect your account and see what’s changed in our terms of service. Hey, friends! It’s a new year and that comes with some important updates! Protecting you and your security is always top of mind, and for us to do that, we’ll need you to: Update your Wyze app to at least 2.27 Up…

Is there an option yet for the automatic firmware updates? My cameras are setup to monitor my snake in her enclosure. Of course, she somehow escaped yesterday and the cameras were the first thing I went to. But because of this pending firmware update, nothing was recorded! I’m beyond pissed off at this

All 13 of my cams have had pending updates for months. I refuse to update to buggy firmware which is every release.

Yet, all of my cams operate flawlessly on old stable FW and the old stable Android app. Full CamPlus cloud events and notifications on every cam, continuous uSD recording on all that can.

Pending updates won’t keep your cams from recording unless the last update broke them. Yet another reason not to have forced or auto updates.

A pending update should not stop your cameras from recording. Since the great escape happened yesterday, did you select that date on the top of the Events tab? If still nothing, did you try clearing your event filters (funnel icon, clear all, show results)? If still nothing, was your camera set to record (Camera settings > Event Recording > Detects motion)? 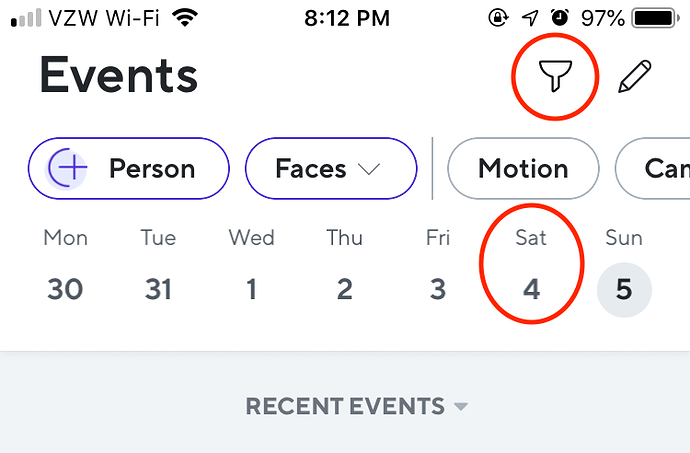 Yea it looks like everything for both cameras stopped recording after 8:30pm on 5/24. I updated the firmware on both cameras, and instantly they started working again. I was using a free subscription that came with my cameras, could they have stopped working because that ended? I got them on May 10

my cams have had pending updates for months. I refuse to update to buggy firmware which is every release.

Yet, all of my cams operate flawlessly on old stable FW and the old stable Android app. Full CamPlus cloud events and notifications on every cam, continuous uSD recording on all that can.

Pending updates won’t keep your cams from recording unless the last update broke them. Yet another reason not to have forced or auto updates.

Yeah I used to brag this way too. Then Wyze forced out firmware updates to people who had been declining them diligently for years. After some bad press they admitted a few months later that it was for a security issue they had let fester. There went my hopes of one day using the Xnor code on my V2s.

I was using a free subscription that came with my cameras, could they have stopped working because that ended?

5\10 to 5\24 = 14 day CamPlus Trial. Once expired, you will no longer get Full Length Video Event Recording to the Wyze cloud. Now on the basic no subscription plan, you will only get a motion activated thumbnail snapshot with a 5 minute time out between event recording snapshots.