Anyone know what’s going on with the wyze app on iOS? Did the most recent update and the apps takes forever to load if at all. Once you do get in everything freezes again. Open the bulbs and color selection and power are froze, want to select a cam to view? Also froze

I have had this happen before on IOS. Delete and reinstall the app. Let me know if that resolves it!

I’ve a WCO v2 that caused the Beta App to lock up multiple times, presenting a “App crashed, do you want to send a log”, which I sent twice.

I opted out of the Beta, issue still occurring,

I don’t appear to be locking up anymore, but, my WCO v2 is still triggering one of my Rules when I rotate the iPhone 12 Pro Max while viewing that camera.

I’ll open a new thread on that issue.

Sent several log files and spoke to support and they confirmed it is an issue but they do not know at this time what is causing it and have no fix for it. 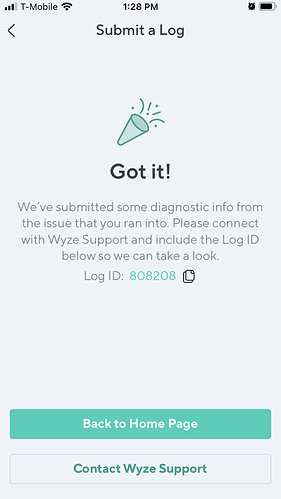