Hi
I have a v2 camera in my home.
Connection to that camera is very intermittent. Often the Wyze app on iPhone would not says its “offline” and could not connect to it.
The camera is about 20 ft from my router. I have few devices in the house not too far from that camera, None have connectivity issues (ipads, Amazon Fire TV streaming movies -not at the same time, etc).
Resetting the camera helps for a short while, Couple of house later camera is back to be “offline” again. That camera has SD card.

Any ideas?
Do i need to set my 2.4Ghz network in a certain way?

Google the brand name and model of the router. Try to see if other users are experiencing problems with that particular router. I say this because I had a WiFi 6 router where the 2.4ghz channel had issues. other users in the manufacturers forum indicated they needed to upgrade the firmware but the manufacturer never address the issue by upgrading the firmware.

Thank you oldgeek for the tip. Much appreciated.
I have ASUS RT-AC66U B1 router, I googled and it looks like it is suggesting that I disable the “Airtime Fairness” feature in my router . I just did that and wil see if fixes my problem.
I made many complaints to Wyze Support, I am surprised that they don’t know this issues, they keep on suggesting to send me new camera.

Interesting as I just recently had an issue with this too. In fact, I got these cameras to catch the A-hole whole stole a sign I had in my front yard. Jerk got away AGAIN because my cameras were OFFLINE. I had no idea they were and unfortunately nothing was recorded even tho I’ve been told in the forums that Wyze records on SD cards (to which I do have) even offline. But something occurred that it didn’t record at all. And they go offline roughly around the same time everyday is what I’ve noticed. My wifi and electric otherwise works perfectly fine because nothing else goes offline or randomly turns off. So. I decided–>turned the cameras off, unplugged, replugged, restarted, double checked connections, re-connected, re everything and thus far two days into this: one camera turned off randomly but I was able to turn it on via app and that worked (didn’t in the past) and they’ve been on consistent since. I discovered they had gone offline roughly around the same time because I suddenly wasn’t getting notifications on a windy day that the cameras picked up every motion. Today will be day 3 and will check for offline issues again…keeping my fingers crossed.

So far so good, disabling the “Airtime Fairness” feature in my ASUS router so far is resolving the connection issues with the camera.

Regarding wifi issues and many other issues I read about on this forum…
Your infrastructure that supports your wifi environment is a critical part of resolving many issues I see in these forums. We all know that video data is the most dense data for devices to handle. I suggest, and in doing so I am not calling out anyone here, that everyone take a long hard look at your data infrastructures.
I did this last summer when I began seeing many issues in cams. I have 22 active Wyze cams. I’m in the process of adding thermostat and doorbell as well. So I did the following last summer:
First I had Comcast increase my ibroadband pipe by 4x. Then I bought a new modem and a new router, both gigabyte capable and the router with wide coverage and handling over 50 devices. Then I bought a new phone with the latest version of Android.
Folks, 99.99% off my issues disappeared overnight. Yes, it was not cheap, but I have no dropouts, no delays, event playbacks start right up, and multiple cams record the same event at the same time. Over half my cams are subscribed to cam plus. I have no issues downloading, except that the Wyze servers are slower than my capability to manage the traffic. I can upload a video to YouTube quicker than I can download it from Wyze. Are you listening Wyze? My smart plugs and other it devices are never an issue. I have no buffering on TV anymore either.
I’m not trying to lay blame on anyone’s personal infrastructure choices, nor am I going to mention the names of the makes of my stuff, but take a look at the bandwidth of your overall systems. A quality multichannel router will be your best investment. With video, you need a separate backhaul channel. You won’t have any conflicts. I hope I have not hurt anyone’s feelings here, but adding cams to any wifi infrastructure adds a huge load that socks up the most bandwidth.
I see also lots of issues/questions regarding 2.4 and 5 kHz channels. Almost all iot devices run on 2.4. All modern routers can handle both radio frequencies. When setting up routers, make sure both frequencies are turned on. Your higher level devices like computers and tvs use the 5khz.

@rshafer Hey wow how thorough is this!!! Thanks so much for your input. I had no idea how important all of this is. My otherwise other devices work really well with my wifi connections and router and cable and everything so I never imagined needed to upgrade that for the Wyze cams. I will look into this and I know you didn’t want to mention brands but if you change your mind, I’ll take it!

I’m running 22 cams, a doorbell, scale, motion sensors from Wyze and all the other junk like computer, 2 tablets, 3 phones, 4 Alexa devices, etc. I have half a gig bandwidth from Comcast. I only subscribe to internet service though, choosing to stream everything over wifi. I bought a new Samsung phone, new gigabyte Aris modem, Linksys AC4000 tri band router. Remember, every motion is uploading to Wyze. Every view is downloading from Wyze. You will find after the upgrade, that you will be faster than Wyze servers. I know this because I’m uploading (slower) and downloading (faster). Uploads are always slower. And I can upload to You Tube very fast. When I get a notification and I can check it right away, I have to wait a couple of seconds because it’s not yet on Wyze servers. There are 4 parts to your local environment…internet speed, modem throughput, router throughput, app speed (phone or tablet). So upgrade as best as you can afford. You will see differences in all your wifi use. Good luck. Oh, if you have a large house, consider a mesh router.

Here is another tip. If you use cams indoors, you can enhance night vision by buying an infrared floodlight. The cams come with infrared for night vision, but very limited range. A floodlight will make it seem like daylight in a room. Take a look at this pic. This is a totally dark room except to infrared sensors. 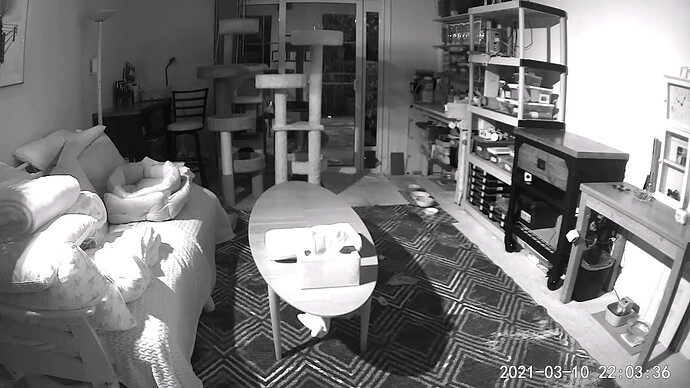