Since the latest update One of my two V3’s fails to allow changes to the Detection Settings/Detection Zone. I had exclusion areas set up previously which were working fine, I was able to load the screen to change them as required.

As of the last update the Detection Zone is toggled off and toggling it on produces only a “loading” message and a grey detection area. 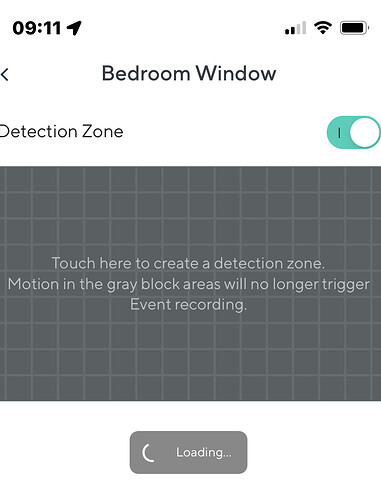 As a result of this I am getting alerts for everything within the camera’s view, which of course is plenty annoying seeing as it faces a busy side street outside my house. I am on up to date IOS and 13 Pro

FYI, this has been reported extensively on the FB Wyze Core Community page as well also affecting WCO’s

Can we get a bit more info:

What I would also do, as I have made this a habit when updates are provided:

Off to power cycle the cam.

Reporting back after doing all suggested above - Same result.

As I also mentioned this problem has been widely reported on the Wyze Core Community Facebook group, I am trying to encourage those reporting it to come here and do the same.

I should also point out that the only fix mentioned so far is to use the android app to make the changes to the detection zone.

I will re-test on my v3 camea with my iOS device and let you know.

Many thanks - In addition same problem on iPad Pro as well

just confirmed, Detection Zone, in iOS, will not load. Here is what I am seeing:

Yep, I added it to the Beta Site for reporting prposes. I tagged you there as well

Affects my iPhone, but my Android Phone is able to access and set Detection Zones without any issues.

That is what I noticed as well. Thanks for validating this.

Well it may not be the app update, but i just found out from another found user, that the reason i cant download a time-lapse video i had created on one of my v3 camera’s, is due to the last firmware update it did…

I have to say, ive spent more time troubleshooting these bloody things that i have used them. just 2 days before i did my first time-lapse and downloaded it without issue. I was very happy about that, and so 2 days later i did another time lapse (11 hours worth), went to download it, but get an error message “error downloading, make sure you are connected to the camera”. I tried everything, and nothing worked, so i posted about it, and thats when a kind user told me the last firmware update killed being able to download the video…… so tired of the issues…

Maybe they dont have enough staff to properly test their firmware… ?

Maybe they dont have enough staff to properly test their firmware… ?

I think we are the testing staff.