One dot of hot glue and you’re done.
Doesn’t block the mic or the IR
Easily removable. 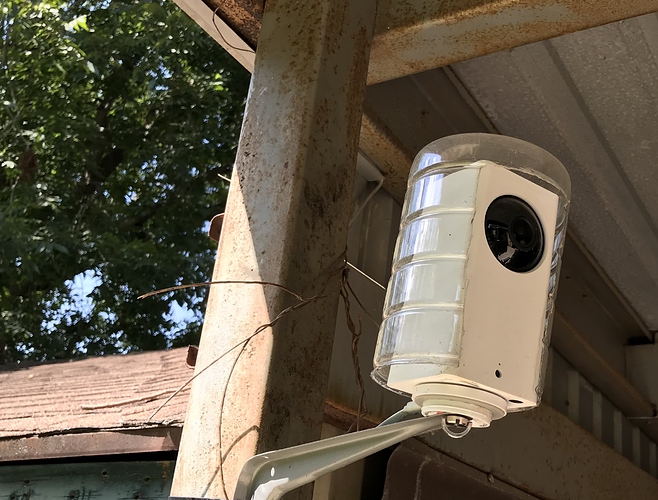 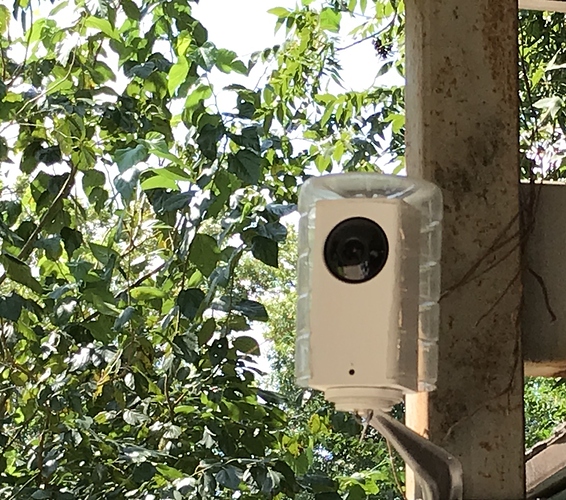 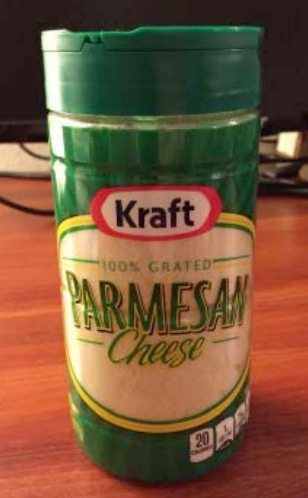 Not a fan of Kraft will this work as well?
https://www.amazon.com/365-Everyday-Value-Grated-Parmesan/dp/B074M9NTCM/ref=sr_1_1_sspa?crid=1LSIMCHMPQHUT&fpw=pantry&keywords=parmesan+cheese&qid=1567796987&s=pantry&sprefix=parmesan%2Caps%2C137&sr=8-1-spons&psc=1&spLa=ZW5jcnlwdGVkUXVhbGlmaWVyPUEzQlhJMVVDRDhXMVBHJmVuY3J5cHRlZElkPUEwNTk0MzQ5M1NUSEQ2MlQ0OVI4SyZlbmNyeXB0ZWRBZElkPUEwNzAzNDc3MjJDR0YyVU42UTRCMyZ3aWRnZXROYW1lPXNwX2F0ZiZhY3Rpb249Y2xpY2tSZWRpcmVjdCZkb05vdExvZ0NsaWNrPXRydWU=

I have a request and a suggestion:

I would like more information about the screw attaching the camera base to the bracket. What kind is it and where can I get them?

A very clean and simple camera cover. If you were to cut a three-sided rectangular opening in the upper part of the jar (top of rectangle left uncut) instead of a three-sided rectangular slot all the way to the bottom, the resulting three-sided tab could be bent up to serve as a rain deflector. Part of it may need to trimmed away so that it does not interfere with the lenses’ view. The bent-up tab could be heated with a hair dryer and quenched in cold water if needed to maintain its folded shape. Not cutting all the way to the bottom of the jar would make the cover stronger at the base. The scissors would probably need to be supplemented or replaced with a sharp pen knife.

so that it does not interfere with the lenses’ view.

You have a point Jason.
I had invisioned the rain deflector sufficiently high and of low slope so that there would be no IR reflecting back.
I should have mentioned that.

Not a bad idea.
I made it this way with all the other housings available online in mind, which have very little overhang. I was skeptical about those little birdhouse roofs, etc,… being enough, but it seems to work for them.
Also, it’s hard to tell from the angle, but I gave it a little more overhang than any of those by gluing it as far forward as it would go.
This camera is under a carport though, albeit right at the edge, but I had another cam watching the pressure gauge on my pool filter, completely unprotected. It saw some pretty serious storms and lived to tell the tale.
Still, I think next time I’ll snip out a simple visor from a clear plastic produce container and glue it on top.
As far as the canister being cut all the way to the bottom, it’s still quite strong and solid due to the ribs in the plastic.
The bottom screws are just 1/4" D-ring camera screws, available on Amazon.
P.S. I made a spacer between the bottom of the camera and the bracket out of the top of a prescription pill bottle, as you can see. I’m trying to remember why. lol I think the screw might have been a little too long to tighten the camera down properly and that solved the problem.

I’m not sure how I could possibly know. I’ve never tried it.
If you put the canister on top of your camera, and it’s diameter is greater than the cam’s widest points, I’m gonna go ahead guess that it would probably work.

You are right about the ribs providing strength.
Thanks for the screw information.