Is there any information yet on the support page about , automation tasks and shortcuts ? I didn’t find any

Following up: version 1.5.31 exhibits the same behavior, a bending at launch.

Need information about 360p mode since after applying 4.10.1.27 and this app update cameras show great signal strength but will not connect to the app.

It should be posted on our support page now.

Thank you for the info! We’ll look into it right away.

Could you try powering cycle your camera? https://support.wyzecam.com/hc/en-us/articles/360012202412-What-is-the-difference-between-HD-SD-and-360p-video-settings-

I just got a possible fix for your issue but unfortunately we can’t reproduce the issue with the Android device we have (Nexus 7) on Android 5.1.1.
My email address is ltan@wyzecam.com. Can you send me an email so I can send you the link to download the app?

Since updating to 5.42, I’ve experienced numerous issues on all cameras while viewing with a Nexus 6P. Playback freezes constantly (despite power cycling the cameras and clearing the partition cache on the phone), I can no longer “stretch to zoom,” and in general, crashes. I see others have commented on multiple issues since the last update. Can you advise on a timeline to resolve this buggy release? Thanks. 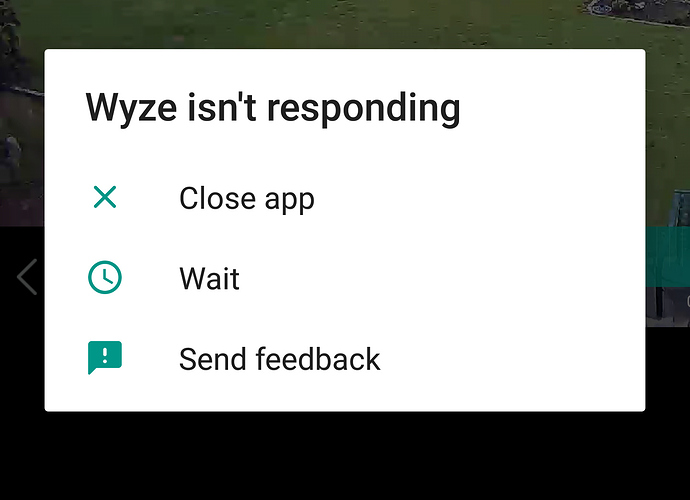 What is the OS on your phone? We have two reports that app crashes on Android 5.0 and 5.1. If so, could you send me an email at ltan@wyzecam.com? I have a test app that might solve your issue.

I am running Android 8.1.0 on a Nexus 6P with 128 Mb on a mesh (Google Fi) network with tons of speed and connectivity. I never had an issue with any of the cameras or trying to view the playback on the previous version. The app crashed again this morning when trying to view playback on a Cam (I also have CamPans and will test them). There is a significant lag when trying to “Pinch to Zoom” the playback and when it finally does work, it no longer responds to swiping right or left. Then it crashes. Hope this helps. It’s a great product and I know apps can sometimes be buggy, but right now I can’t play anything back which defeats the purpose of having the cameras in the first place.