No. But. If you say your good morning as a specific window of time, you could create a couple of routines that perform the “whatever” up until a certain time, and stop. Then start doing “whatever” again after a certain time. Which in effect is blocking out a window of when you don’t want it to perform “whatever”. Make sense?

Thanks for your response…
I did consider a set time for which the notifications would be silenced, but initiating my Alexa “Good Morning” routine happens at varied times.
I may look into the Smart Things app instead…

I may look into the Smart Things app instead…

SmartThings doesn’t interact with Wyze in any way. The only other option is IFTTT which probably won’t work either. Update: IFTTT Will work. 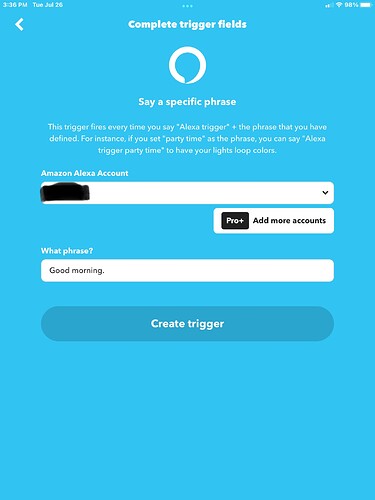 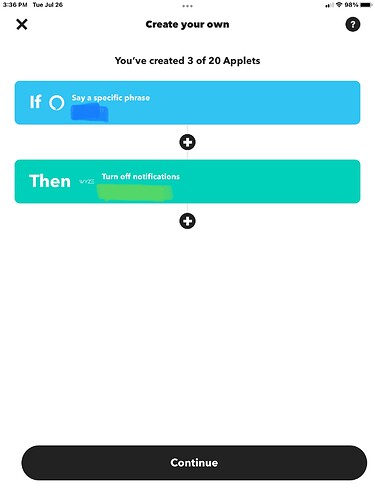 You could probably use Alexa to manipulate a Wyze device power state (thinking switch or plug) and then have a Wyze rule to turn off notifications.

If you have an Alexa routine called “Good Morning” add a custom command as the last operation to trigger the IFTTT applet: 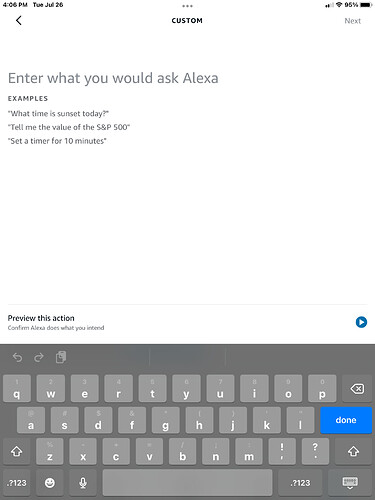 Right now, Alexa routines actions list all my Wyze Cams as “unsupported”. I can’t get Alexa to do any action involving a cam. It will let me choose a Person Detection as a trigger, but no actions.

But, I have outsmarted Alexa and the Wyze Skill (or they outsmarted me by making me buy more IoT): the Wyze plug is actionable from the Alexa routine voice command. When I tell Alexa “I’m leaving”, the routine sets Alexa Guard to on and turns my “Away” plug on. When my Away plug turns on, my Wyze Rule sees this and turns my indoor security cams on as well as sets my Thermostat to away. The rule could just as easily turn on\off notifications for the cam. I have the rule power off the plug after 1 minute.

When I get home “Alexa I’m Home”… Guard off, “Home” plug on = Cams off, Thermostat to Home. Home plug off after 1 min.

Not ideal Alexa Skill compatibility, but I work with what they give me until the skill improves.

Thanks, but a smart plug will not work in what I wish to accomplish. What I actually want is for a security cam to silence notifications to my smartphone upon an Alexa routine being triggered, I don’t want the camera to power off, I don’t want to receive detection alerts from it…it seems as though I’ll have to set the alerts to a timer, it seems like the only way.

I only use my Wyze smart plugs as a relay switch between Alexa and the Wyze app. I have nothing plugged into them and they have no other purpose but for Alexa to turn them on. Since the plug is simple and both Alexa and the Wyze app can work with it, it is the perfect relay. When the plugs get turned on from my Alexa voice command (3 of them = Home, Away, Sleep) the Wyze app sees this and then performs all the Wyze Cam and Thermostat routine functions that Alexa can’t… To include notifications for any\ all cams.

Pardon my ignorance, but now I see what you are using the smart plug as…ingenious!
I’ll have to try it…Thanks!

Yeah, I was pissed that Alexa (or more specifically the Wyze Skill) wouldn’t let me use her to control my cams and thermostats. Then I did some digging to see what Wyze devices Alexa could control. When I saw that the plugs were an Alexa Routine on\off action and they could also then be used as a Wyze Rule trigger for any other Wyze Rule Action (Sooooo many more than Alexa is allowed to touch), I was off to the races.