This camera has had person detection since it was first introduced and was working fine when Cam Plus Lite was introduced.

It still shows up in my Cam Plus Lite devices but is toggled Off and will not toggle On.

In the camera settings, if I select person detection it gives an error message saying I need to subscribe to Cam Plus.

This is the primary security camera at the front of the house so motion only detections are just an annoyance.

The charge per-camera per month model is not what I want and not having that is one of the main reasons I chose Wyze several years ago. Once I was locked into Wyze cameras they changed their pricing model so Wyze Cam Lite is important to me.

Not sure what this is…a V2 or PanCam?

Have you tried all the usual troubleshooting? Clear cache from app; logout/login; power cycle the camera? 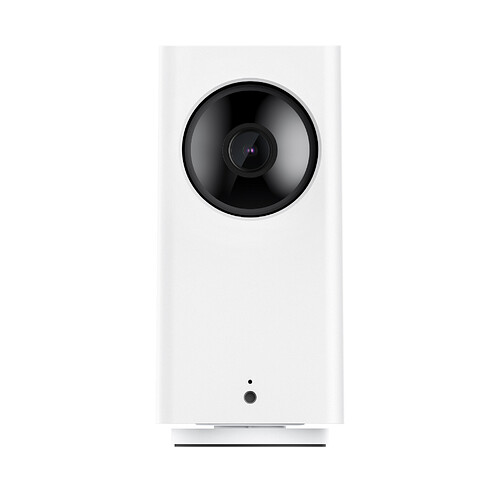 Pan, tilt, and zoom with this multi-purpose security camera from Wyze. Need a baby monitor? Pet camera? You got it. Great add-on for indoor & outdoor home security systems.

I’m reluctant to clear cache etc. because I have 6 other Wyze Cams on Cam Plus Lite & I don’t want to chance losing person detection on those as well.

It has worked fine since person detection was first introduced a few years ago and only quit with the latest update so it seems highly likely the update broke Cam Plus Lite for Wyze Cam Pan V1. It still shows up in my list of Cam Plus Lite cameras but won’t toggle On.

Looking at that firmware version you posted, it looks like your on beta firmware for the v1 PanCam (as confirmed by a recent update in the beta section of the forum). Here is the current production firmware series for the PanCam v1. 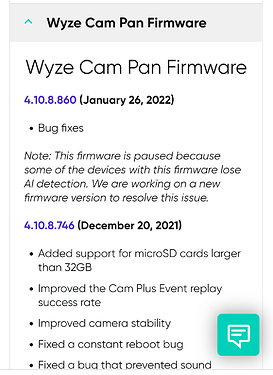 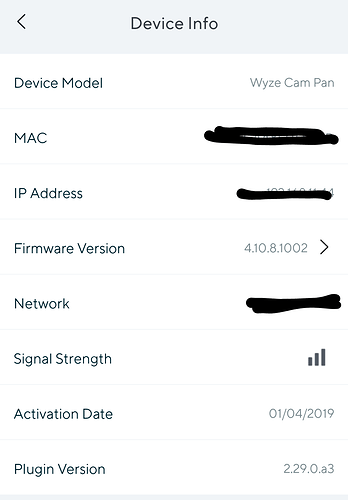 I have submitted logs to Wyze Support.

Sounds like they reserected and old bug in new code?

forgot I was using it.

Here is my panv2 device info. 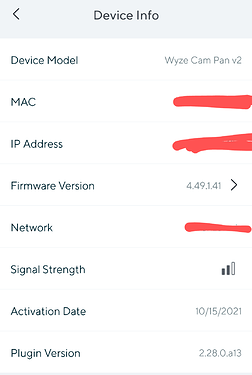 Your device info states you have the original pan camera. Also the activation date is 2019, and the pan v2 wasn’t released until the middle of 2021.

If you have the camera activated in the CPLite service settings, then you should have the CPL on the camera. In your regular Camplus screenshot, this one: 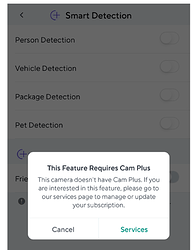 Its telling the truth, that toggle is for the actual “camplus” service only. That is not showing the CPL status, which is shown in your CPL screen shot. Agreed it’s not the best interface, but think as camplus person detection and CPL person detection as two separate things that have seperate toggles.

What firmware is on the “12g rear Pt” camera?

Ok, makes sense. It probably is a V1 then!

The other PT camera was purchased at the same time and is on the same version 4.10.8.1002 and I just checked and it does seem to have the same problem. Unlike the first one, it will let me toggle it on in my Cam Plus Lite devices but the cameras own AI settings produce the same error message.

The 2nd PT camera is not on the Beta program but the 1st PT one is so it doesn’t appear to be a Beta program issue.

Like I mentioned, it appears to be a error message but it’s not. It’s saying that the person detection toggle on that page is for “Camplus”, the original ai/complete motion capture service. “Camplus” is not “Camplus Lite” and neither of those is “Camplus Pro”, although they share and have similar features.

It appears now that none of my camera let me turn on Person Detection in the camera’s settings.

So, how do I get the Person Detection working again on Cam Plus Lite?

Am I missing something here?

So, how do I get the Person Detection working again on Cam Plus Lite?

If CamPlus Lite is enabled for the camera so is person detection. There is no other setting to activate it. You should see your videos in the events tab identified as person. If you want notifications you have to turn that on in the notification settings for the camera by enabling Wyze AI notifications. The screen you show for Smart Detection is for CamPlus, not CamPlus Lite. 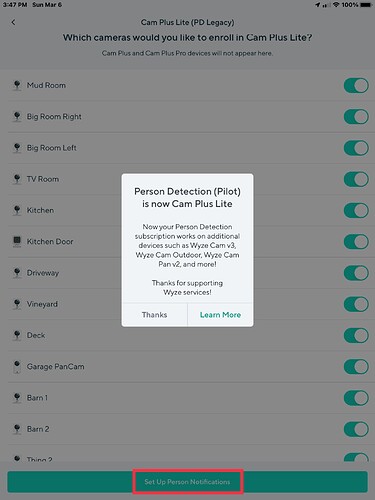 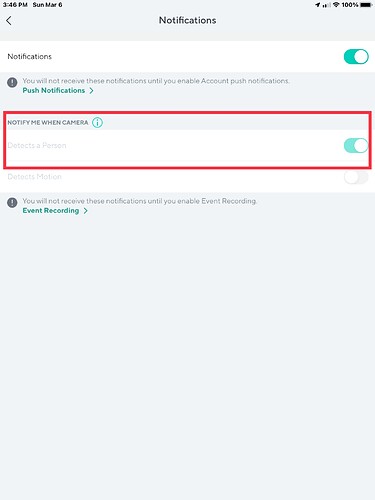 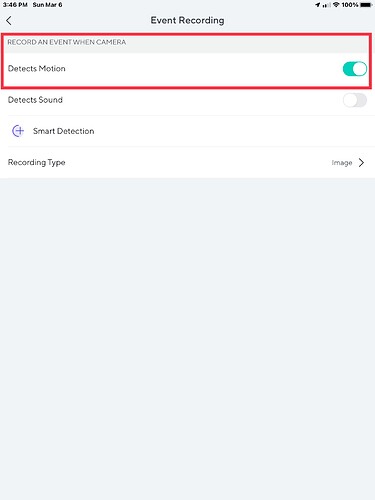 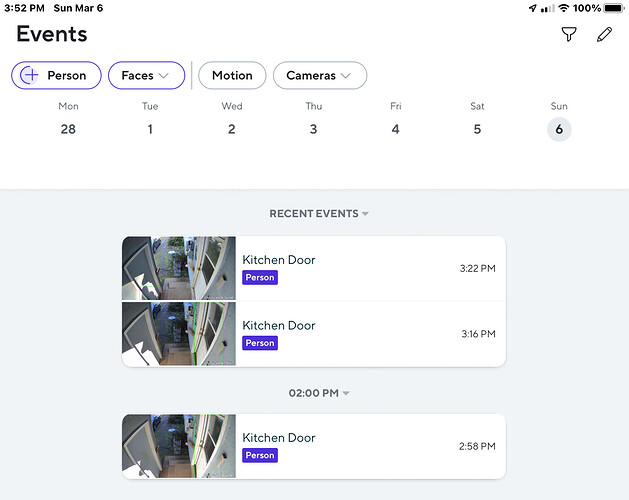 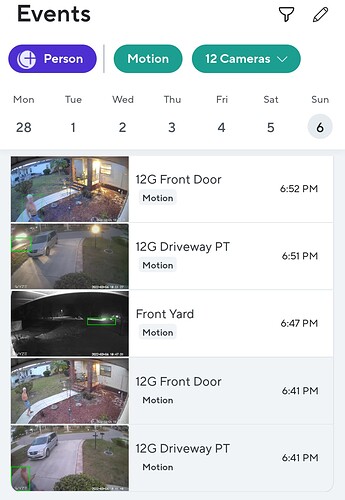 It used to work that way for me but doesn’t seem to now.

I still can’t toggle On my Driveway PT cam in Cam Plus Lite but even the cameras that that are toggled on are giving me Motion detects instead of Person detects.

If I try to toggle on Person Detection in any of the Cam Plus Lite cameras I get the error message.

I’m pretty sure when it was working I had to toggle On Person Detection on each cameras settings?

I’m pretty sure when it was working I had to toggle On Person Detection on each cameras settings?

I was just double checking my settings and you are correct and I apologize. 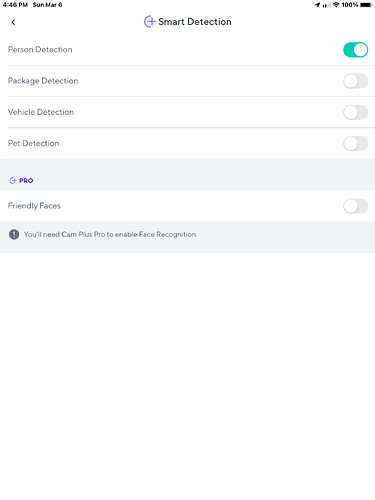 Not with CamPlus Lite, only with CamPlus. You DO need to enable Person in the notification settings. You should probably look at this post to see if maybe something there can help:

If you are running Android, make sure you have the latest version of the app, currently v2.28.0 (102). Make sure you v3 firmware is up to date, currently at 4.36.8.15. Person will not show as selected under “Smart Detection”. It is enabled and unchangeable with Cam Plus Lite. If you see your cams listed and toggle ON at Wyze app Home > Account > Cam Plus Lite (PD Legacy), try powercycling (unplug/replug) your cams and reboot your phone/tab. Then, go back into the Cam Plus Lite (PD Legacy) m…

I’ll give that a try tomorrow. There is no option under Notifications to toggle Person.

I just got the email from Wyze Support. Nice to know I’m not going completely bonkers! 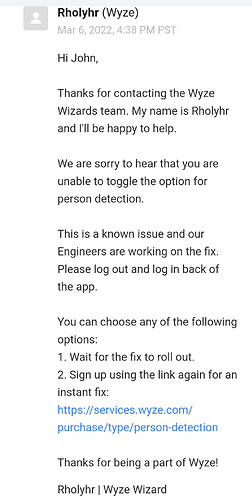 Exact same problem. One camera of my 6 now only show stills after last firmware upgrade.