Updated no issues with V2 and app.

I am also not seeing it. Wonder if there is a android version tag or requirement that is being set incorrectly when they publish the betas.

Android specific bug In the events tab, filter to a group of cameras, then exit app. Then open the app and go back to events, the events page shows ALL CAMERA events, even though filter still says it is turned on only for that filtered group. To show this is happening, if you click on your filters icon, and then click cancel, then wait a couple of seconds, it will show the green button with the number of cameras you have in your selected group. However, all of your events will still show up.…

My WCO’s at two different sites and ISPs don’t work on this version (2.29).

Outdoor cams have no video on 2.29 on iOS. It just sticks on getting video. Rolling back to 2.28 fixed the problem. Also works fine on Android 2.28.

Just a heads up, we’ve released 2.28.2 to the beta channel so you folks get some critical fixes ahead of the cloud storage changes rolling back out in the next few days. You folks might end up on an “older” version than what’s listed in the OP, but please try not to be on the current 2.29.0 beta versions when the cloud storage changes happen so you can avoid running into issues.

I switched a while back to the App Store version on my iPad and the beta from TestFlight only on my iPhone so I could compare. Right now, I got 2.29 on iPhone and it seems fine so far. Meanwhile, I got 2.28.2 from the App Store that is actually showing the title as WyzeBeta, although it doesn’t have the orange dot. Not sure if it’s a goof up, an artifact from having a beta previously on the iPad or if you intended to put a beta in the App Store. Just got a feeling some who got no idea about beta testing might find it disconcerting to see their App Store app show up as a beta.

Just noticed this today. When toggling Fisheye On and Off you lose Advanced Settings (if on) of Logo and Time stamps "when toggling fisheye Off.

Glad you posted the images, made me realize the pro may not be worth an upgrade for me. Looks like very little view expansion if you compare the perimeter of the two views. I was sort of thinking fisheye view might show more of the area directly below where I cannot see packages, it’s clear now this version is only a little bit better.

Great catch @R.Good . I wonder if it is because the screen zooms in some when it goes to the square look

Hey @ChemEngr
Sorry this isn’t a comparison of the VDBP to the VDP. Both views are from the Video Doorbell Pro. Wyze added the ability to turn off the Fisheye view. The images are just showing that the stamps are missing when switching views

@Newshound did a really nice viewable comparison of the two devices here. This would be a better reference. Wyze doorbell cameras comparison - #15 by Newshound

Nice catch. So it does cut off the edges a little to straighten it out, thus chopping off the logo and time stamp. I wonder how hard it will be to compensate for.

I guess this is the wrong thread since its for the betas, but it just kind of surprised me the 2 views were not more significantly different for the area captured… anyway, thx for that link - much better comparisons.

I was just recalling some saying the fisheye on the pro showed more of the “floor/landing/porch” directly below the unit for viewing packages - which is what my DB lacks, cant see pkg under it, so considered the upgrade. But what I see is very little benefit to the pro for my sidewall mounting - just might see those approaching from the left a bit better. We have so few deliveries its not a big deal and my front facing v2 catches the people approaching so it still is all we really need.

I will say that the Pro Fisheye does give me a little better view than the original VDB did. I can see some packages that I couldn’t see before. It’s not a HUGE difference, but it is a little bit. I don’t have the original mounted currently, but I do love the extra little bit of view I get with the fisheye. I can see my welcome mat when fisheye is on, and lose most of it when fisheye off. It’s not uncommon for delivery people to put packages on the welcome mat. 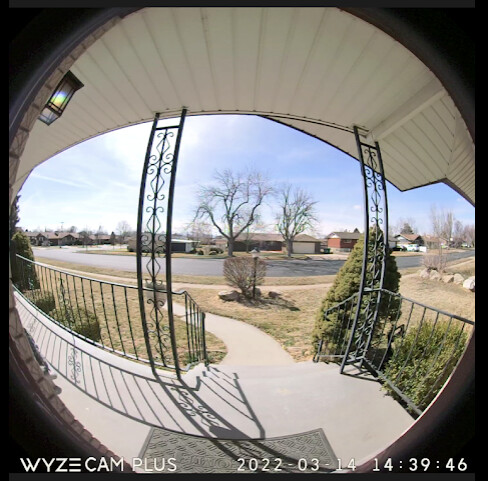 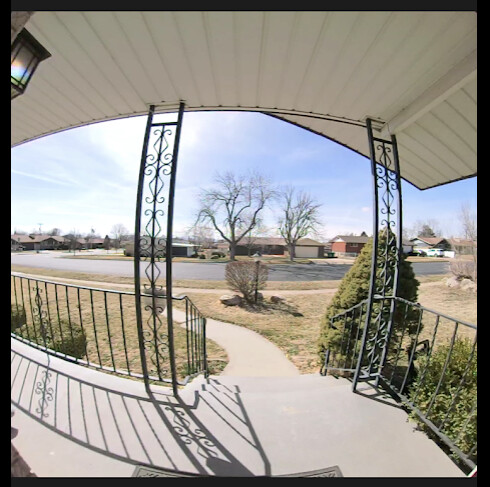 (Also, for the sake of the thread, I am confirming the Logo and timestamp disappear)

I’m not too concerned about a missing logo, but I do like to view the time stamp.

With your mat in view it is more obvious, most mats are probably 16”-20” give or take, so thanks for that. I have my current plus 2 still in boxes. Maybe I’ll sell all and upgrade. It won’t see the large envelope types against the wall but it might see boxes.