You can give a Cam v2 backup power!

NOTE: I don’t have a Cam Pan, so I don’t know if this would work for that too. Trial and error!

Step 2wo: Plug the camera’s power cable into the bank

Step 3hree: Plug the bank into a wall adapter so that it’ll always be charging

Step 4our: Press the “on” button on the bank if needed

And done! The v2 doesn’t seem to need that much power from the bank, so I’d say that using the one I got from walmart, It’ll run for a long time. Though, I only have it set up this way so that if the power goes off for a sec, it’ll reconnect a bit quicker, since I’m just using the cam as a Sense bridge.

Yes this has been discussed a long time but there seems to be a gray area as to which batteries really provide pass-through charging properly. It is rarely in the specs.

Hmm, then I guess the user should test their power bank and see if it can charge and provide power at the same time…

Or you could let people know which one you are using.

I lost the box to it, but I’ll post a pic of it. Got it at Walmart around 2-3 years ago, and it looks like this 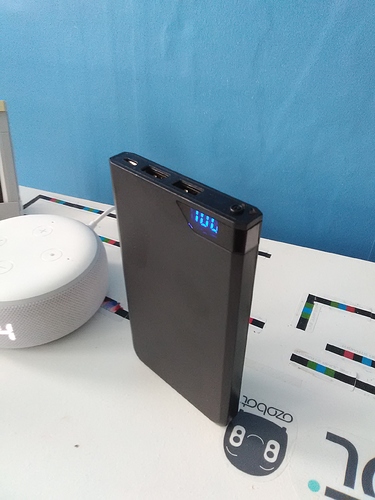 Also, the info on the back of it reads:

I’ll post a photo of the info on the back once I can get a good one since my phone refuses to focus on it.

One thing to consider when charging that pack all the time is will it overcharge the battery?

Or does it have a charge controller that will properly control the charge, if that battery is getting very warm it likely has a cheap charging circuit. This could be dangerous and a fire hazard.

Something to be aware of

This is what you should be looking for on Amazon:
“5V UPS battery backup uninterrupted power supply”
They come in all shapes, sizes, and price ranges, starting around $20
They are designed to plug in full time and only switch to batteries during a power outage.
You can use one for your modem and routers as well. These have been around for ages and should not present a fire hazard.
Probably a product Wyze should offer.

Y’know what? Wyze should make one of those!

Doubles as a space heater.

Yeah, or a white noise machine if they put some fans on it.

The bank stays nice and cool. Though I do understand your concerns!

What do you think of A Space Heater Cameras

Hi, everyone! I am a product manager who recently joined Wyze Team. We are investigating the opportunities to provide a comfortable home environment for you and have a short survey about a heating solution if you’re interested. This survey will only take about 2-3 minutes of your time and will guide us to make something useful for you. https://forms.office.com/Pages/ResponsePage.aspx?id=DQSIkWdsW0yxEjajBLZtrQAAAAAAAAAAAAMAAK-R_p5UNDhUS1FKUFhIVFgxOTFJTEpVUVZPRVZLVC4u Thanks for your time!