I have serveral V2 Cameras and have had no issue using 256gb Micro SD Cards. I just received the V3 and have not been able to get any other micro SD card to work other than the 32gb. I have even downloaded a 3rd party program to format the larger MicroSD to FAT32. Is there a reason that the V3 is not compatible with larger format cards?

Try using this program to format the cards and see if they work.

A lot of us are having same issue.

V3 sd card not recognized after power off or reboot Cameras

I was able to get 64gb cards to work by formatting them with this program I’ve had no luck with anything else.

The wording is too vague and also it’s a FAQ and not a technical spec. Nowhere else in any documentation anywhere does it say that v3 is limited to 32gb. This Brenda may very well be wrong.
The faq states you “can” “install” up to 32gb. What does install really mean? You can install 32gb or you could say insert or use or utilize. And saying taut you can, that’s like a suggestion. hey , Brenda says you can install 32gb but Bob said you can install 64gb. Unless it’s in a technical spec, then “Brenda said” is not good enough.

As a note fat32 is limited to 32gig allocations. To get 128gig cards to work with camv2 they need to be exfat I learned on mine. My v3 isn’t here yet but I’d start with that?

edit: I remembered incorrectly, as noted below ex didn’t work. I now remember vaguely more from when I had first bought them. Windows didn’t like the fat32 on a large disk so I used exFat which the camera didn’t like, so I formatted with the camera and that blew up in my face as well, I forgot I had to download another formatter. Sorry for the lapse in memory.

The v3 will not recognize exFAT format. It must be FAT32 which can be accomplished with a 3rd party SD formatter. 128GB has been working well for many here in the v3 as well as other sizes larger than 32GB. FAT32 is the key… 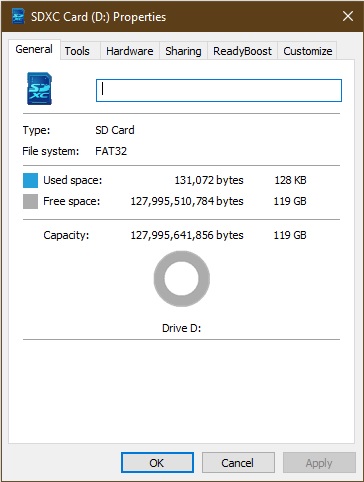 Thanks! Used guiformat-x64 to format a 128GB MicroSD card and inserted into a V3. The V3 “ding ding” and recognizes the card and is recording. However when I format the card again inside the Wyze app, the V3 fails to recognize the card. Then I have to reformat the card to extFAT and use guiformat-x64 to FAT32. My worry is problem will pop up when the card is full and the old files will be erased by the V3. Will see.
And V2 can directly recognize and format a 128GB card. Don’t know why V3 cannot.

My worry is problem will pop up when the card is full and the old files will be erased by the V3.

Wyze cams with SD are designed to overwrite oldest files when full and it’s working well, including the v3 cam.

I agree with you that it’sa big problem. This keeps me from recommending the camera to other people. I have to always explain that if they order it, there is a problem formatting the the most common as cards available on Amazon or cards that they may already have.
They ask why v2 doesn’t Have this problem and are disappointed that the software is so inconsistent.
I feel the issues with formatting is a very big Problem that shouldn’t exist.

Hopefully forum moderators will reflect this issue to the dev team to fix it in future firmware update, Though Wyze cannot make card support greater than 32GB official. Anyway I am very pleased with my V3. Have 7 V3 and waiting for two more orders of seven V3 each expected by end of year. Wyze should make car/body cams using the starlight sensor!

How did you manage to get the V3? I’m trying to get one but can’t preorder one.

Preordered in the first few days.

Can we still preorder it right now?

It seems as though even the preorder is sold out. It’s a good problem to have for wyze. They cannot make them fast enough to keep up with demand.

Ah ok do you know when it coming out? It says January but the 1st of January?

I just got four Wyze Cam V3 and four Samsung Evo Select 256 GB microSD cards. Since the cards come formatted in exFAT from the factory, they don’t work out of the box. However, I simply formatted them in my Galaxy S20 Ultra smartphone (incidentally the best phone Samsung has ever made to date) using the system settings (under Battery and Device care—Storage—Advanced), and then they have worked beautifully. Therefore, all you have to do is to format them with FAT32 using your smartphone or computer first. You shouldn’t need a special software or app for the formatting in the external device. Moreover, you can later format them again inside the Wyze Cam V3 and they still work just fine. They need to be formatted in FAT32 with another device for Wyze Cam V3 to recognize them. Subsequent formats can be done in the camera if necessary.

Caution: Do not insert a card in exFAT format (a card larger than 32 GB not formatted in FAT32 using an external device) before you set up the camera, as it will cause the setup to fail, and you will have to factory-reset the camera to redo the setup.

Yes! This was the solution I needed! Thank you gesirgen for the suggestion.

When using Samsung Evo Select 256gb SD cards I have been unable to get them to work, I even tried GUIformat as suggested previously, which I do not doubt does work on 128gb and smaller cards but I had no luck on the 256gb cards… But then after seeing this post I tried to format the card using my wifes Samsung Galaxy a71 5g using format under settings in Android. It is now being recognized by the v3 camera and even made the “ding ding” type noise about 5-10 seconds after inserting the card… I have not used it for very long so I don’t know how it will act when card gets close to running out of storage but I wanted to update this for people possibly struggling with the same issue. I don’t expect to have any issues but I will update if I do.

Side note, not sure what Android and/or Samsung is doing differently than when I used GUIformat but I am guessing formatting it in other makes and models of android phones/tablets will work just fine. Maybe someone with more time and knowledge can figure it out in the future. Possibly different allocation unit size than the default suggested by guiformat?

This shouldn’t be an issue in the first place.
Wyze cam should just see this card and allow reformatting no matter what format was inserted. The original wyze cam and v2 both formatted any card without issues and it only became An issue with outdoor cam and v3.

Hello to all,
I’m new to Wyze and to the forum. Many thanks to all that have shared their experiences and knowledge.

What am I missing? 4 year break even for an SD card, with the only advantage being maintain video if internet connectivity is lost. I understand their utility in remote areas. But are there other advantages to SD cards?

Thanks in advance.
bill

You can record continuously onto the sd card. The camplus still only records short events with a cooloff period in between. It’s possible that something important could be missed.