I’m using a single CAM V3 with CAM Plus. For the first couple of months, all video played smoothly, both from recorded events and SD card, pretty much as you describe yours.

About 3 weeks ago, all video playback became nearly unusable as it would play for several seconds, and then pause for additional loading. This would happen multiple times during the playback of very short videos, some as short as only 30 seconds or so. I’ve also noticed that event notifications are now often delayed before showing up on my phone.

There is a fact known to marketers that if one person makes a complaint about a product, there are 10 others who just grin and bear it without saying anything at all. Hopefully WYZE can do the math on these forum posts.

I’m pretty sure that event recordings ARE stored on WYZE servers where they are deleted after 14 days unless first deleted by their owners. I believe that playback of those events DOES require their servers.

. I believe that playback of those events DOES require their servers.

That is correct, and I’ve never claimed otherwise.

their servers have nothing to do with delivering a consistent live or SD card stream.

Have you done a hard reboot boot of camera,and have you singed out of your app,and then sign back in? I asked our service technicians and they told me that all of our cameras and the customers systems that we managed are just fine.so with that said looks like your issue is on your end…our technician told me to make sure the phone has the current app firmware as well as android/Apple updates,and do a hard re boot of our router/wifi system so it can clear out the old data,cash 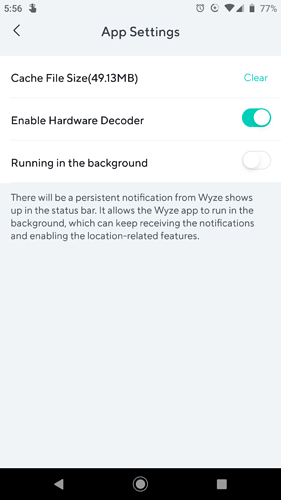 Overall, in theory, yes… But in practical application it can only handle a few simultaneous requests. Someone tested the limit once, I think it varied between like 2-5 connections and then it would choke and end all the streams as I recall. The cams have a finite amount of RAM, processor, bandwidth capacity, etc. So technically if all 21 of you tried at the same time it would not actually try to serve you all, it would reject most, if not all of you… Basically suffering a DDoS attack to take it offline.

These cameras are a joke, seriously, firmware updates non-stop, its one big beta and they are getting worse. Now i only see the back of the head of delivery people even though they walk up the 70 foot driveway to my door and the camera is pointing directly at them. And the real-time view is a joke too. What a waste of time and money.

Event recordings are not stored on Wyze’s servers, at least not in anyway that you’re accessing. They’re being stored in Amazon S3, which is where you’re provided access to them from.

However, their servers do have to provide you the links.

Your statement means nothing to me without an explanation.

So you are telling me that WYZE has chosen to use not one, but two server providers (WYZE and Amazon S3) to provide seamless viewing of event recordings. Seems to me that just adds more complexity and one more potential failure point to the process.

No that’s not it really. S3 is essentially the storage subsystem of the Wyze servers (which I believe also run in AWS). Saying there are two separate systems or servers is like saying your hard drive is a different device from your CPU. It’s not particularly relevant, especially when you have committed to a “cloud” architecture.

Is it more complex and possibly prone to a failure of one side or the other? Sure, but that’s why they try to make cloud services more resilient. Computing is a crapshoot no matter where it is conducted.

The tinyCam developer says, as a general rule, only 3-4 Wyze cams at a time will stream fluidly to a single ‘view’. My experience says three-and-a-half. I haven’t used Wyze’ group functions with more than three cameras at a time since they first developed it, because in the beginning, with three, it was most stable. Recently dumped a bunch into a group and it’s much more stable now, though only 3 (in portrait) or 4 (in landscape) are ever actively displayed and streaming at a time. …

tinyCam has three selectable ‘Stream Profiles’: Main, Sub and Auto.
Main is fixed at HD, Sub is fixed at 360, and Auto switches between the two like the Wyze app.

If I set tinyCam to Auto, it will work for a while but the app eventually crashes. If I set it to Main, it doesn’t crash but it struggles to keep all cams in the group fully streaming. Setting it to Sub gives the steadiest streaming and navigational performance on my setup.

Well, I’m speaking from more than 50 years experience with computer systems, beginning with IBM mainframes in the 60s. The more components and complexity in any system, whether they be hardware or software, the more possibility for system failure or degradation. And if my hard drive fails today, calling it a part of my PC will not prevent its failure from stopping me in my computing tracks. I actually believe you and I are more in agreement than not. Yes, “Computing is a crapshoot no matter where it is conducted.”

Is it possible, maybe counter-intuitively, that cams may stream more fluidly when accessed from a remote location (either cell phone LTE or an external Wifi intranet) than locally (directly connected to the Wifi intranet on which the cams reside)?

IF IN DOUBT REBOOT……. EVERYTHING! I had problems as well, and they have all but gone away. Start buy unplugging everything, cameras, router, and cable/telephone modem. Then restart the modem, don’t move on until it is all booted up and running properly. Then the router, again wait for it to totally booth up. Then start plugging in the cameras.

After I completed this I have had flawless connections. I also now reboot the cameras after I finish viewing.

Well, theoretically, the fact that the stream when local has to depend on the signal quality from the camera AND from the phone/viewer, while when remote only the camera’s connection matters…

An argument could be made.

Thanks for the TinyCam tips. I might play with that for my 4-up display; I assume the default is Auto.

Edit: actually mine was set to “Main” by default. I couldn’t find Stream Profile in the settings for app or specific camera but there it was, sitting off the main menu. Strange that this is a global setting?

I’ll leave it at Sub for a while. The quality is noticably diminished but the frame rate goes from 10 up to 15 fps on each camera, with similar reduction in bandwidth. Unless there is a huge improvement in dropouts over time, I’ll probably go back to Main. Anyway, thanks!

2nd Edit: Hmm, sounds as if Auto should give me better results. I know it didn’t work out for you but I’m going to try.

If auto-stream profile in the app selected, sub-stream will be used in multiple cameras layout, main-stream in single camera layout

Hmm, weird, on Auto it seems to be exhibiting the higher def, lower fps behavior it did for Main. (On my regular 4-up display.)

TOTALLY AGREE… So many errors I am considering other systems. Video frequently NOT uploaded. Need to have someone reboot cameras. Very disappointed. They have branched out too quickly with too many products

Don’t rule out the effect of transmission interference. This comes to center focus for me this time of year…every. single. year. I have lived in my townhome for a number of years, and I suspect one of my neighbors has something (a space heater with a fan blower motor with dirty brushes?) they begin using when the weather turns cold. It creates absolute havoc on my cameras, and everything else I have which uses 2.4GHz. Over several weeks, the interference slowly lessens, until it’s a non-issue after about a month of consistently cold weather.
The only reason I’m aware of the interference, is because when I first moved in, I was using a TV with the old NTSC over-the-air reception, and the the TV would get completely “snowed-out” due to that interference in the fall. I would have been completely oblivious to the interference if not for that, at that time, and would be currently scratching my head over my horrible current camera performance I’m experiencing now.
I suspect that over the years, as we (and our neighbors) add more and more transmitting devices, there are additional “opportunities” for transmission interference.
My 5GHz devices are unaffected by my particular interference issues, so I have moved everything I can to 5GHz, but obviously that isn’t a Wyze cam option currently.