I received my Wyze watch a few days ago, and at first was really happy with it, build quality seems very good, and although very basic in function/features, I felt it worth the money and wait… however, the main reason I purchased the watch, was for the blood 02 senor, and that part seems to have major use/accuracy issues.
I have lung issues, and monitor my blood 02 levels several times per day. The issue I am having with the watch is…

While wearing the watch, I attempt to get my blood 02 reading… the app/sensor/watch takes literally 30-45 seconds to read/display anything, and then, 2 out of 3 times it doesn’t read, and says “please wear watch and retry” or something of that nature (it seems to think I do not have the watch on my wrist). On the instances when the blood 02 sensor/reading actually works, it is horribly inaccurate. I have tested the watch/02 sensor MANY times against a finger sensor model (the same type used at most Doctors’ offices) and the watch/sensor will read 97-99% (even in my young/health days, my 02 never exceeded 96%), while at the same time, the other sensor/device on my finger will read 88-90 (which is accurate for me if I’m not using 02). Meaning the watch reading is off as much as 11 percentage points on the high side! In my opinion, that is absolutely unacceptable. How do I know the finger sensor readings are correct? Because I have taken the finger model/device with me to Doctor’s appointments to verify accuracy against their instruments/sensors… and mine is ALWAYS with 1 percentage point of theirs.

So, I don’t know if I simply received a defective product, or if all the Wyze Watch 02 sensors are inaccurate? I have a ticket in with support now, and am hoping they can help fix it, or I can return it for a replacement.

I have the same issue

Whew! With other’s piping in that they have the same issue…I’m starting to wonder if there isn’t some type of manufacturing flaw in the watches?

It took a week to get a reply from support, and then another series of back and forths… but they are sending me a replacement watch, and emailed me a return mailing label for the one I have.

Based on my previous experiences with other wyze products, I would encourage all who have issues to request a replacement. Wyze is habitually slow to respond to customer support requests, but stick with it, and do whatever it takes to get your replacement … maybe that will make them actually look into the issue and fix it on an overall scale, versus just send out replacements to a few who squawk about it.
I know a lot of folk will say… “It’s only a $$ smart watch, what do you expect?” As the owner/operator of a business, I expect nothing less than what I promise my clients… exactly what my advertising claims. Wyze advertises an 02 sensor on this watch, implied in that is that the sensor is not only included with the watch, but that it WORKS CORRECTLY/ACCURATELY. Hiding behind “low price” is no excuse for any feature not being functional and accurate.

Just got mine yesterday and having the same problem

I also have a finger SpO2 monitor w/heart rate and graph, which I find very useful for when my heart decides to skip beats and you can see what your feeling in your chest. Seems like a “smart watch” should be smart enough to duplicate this. I’ll also have to watch the SpO2 levels, because the finger monitor will sometimes dip down to 95% and I haven’t seen that on the watch, which makes me wonder about the accuracy the others have mentioned. 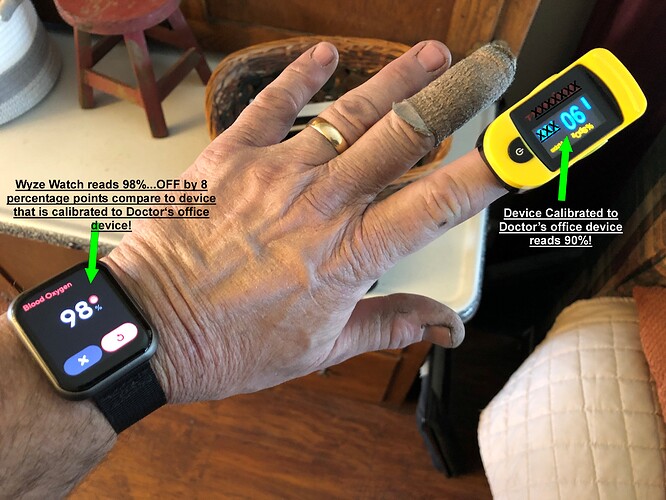 WyzeWatch02Failure4032×3024 2.41 MB
Here is a pic that proves there is a HUGE issue with the watches 02 sensor/readings. (The device on my finger was calibrated to my Pulmonologist’s just the day prior to the pic. I have lung disease and my 02 is commonly at 91-93%, and will only go/be higher if I am on at least 3 liters of 02. )

Prior to taking this picture, it took me 4 times trying to get a reading. The first three times the watch displayed… “Please wear watch and try again” I have tried wearing the watch from so tight on my wrist it’s painful, and so loose it flops around… and everywhere in between, and with each adjustment tried to get an 02 reading… always the same thing. This is the same photo that I sent to Wyze support.
If you’re experiencing this same issue, I hope you speak up to Wyze… the more of us who do, the more likely it is that Wyze will seriously look into/fix the obvious issue(s).

There still has been no fix for the Wyze cameras destroying micro SD cards… an issue that appeared not long after the initial launch. Wyze just keeps pumping out cheap products that don’t work as advertised, and then when someone like me squawks enough, they tell me they’ll replace or refund my money to shut up… and hope that the rest of the people with leave it alone because the cost of their products is so low.
That being said, Wyze seems to do it’s best to gloss over the issues without ever fixing anything, and it doesn’t take a rocket scientist to see they just try to stay ahead of product issues, by producing new products fast enough to draw peoples’ attention to a newer product, who’s issues have not come to light yet… Proof? We’re discussing it right now… a watch that is advertised to have a working 02 sensor…that does not. I just decided that after previous issues with Wyze products, it’s best to speak up sooner, rather then later… and there are already others piping up and saying the same thing… Hmmmmm.

My watch has the same problem.

If you’re experiencing this same issue, I hope you speak up to Wyze… the more of us who do, the more likely it is that Wyze will seriously look into/fix the obvious issue(s).

Like I said… the ONLY way anything is going to happen, is if those who are having issues send a support ticket (email) to Wyze, let your problem(s) be known, and don’t give up on it until you get satisfaction. Just the people who have posted on this thread, means that Wyze has made $150 with the customers not getting what they paid for. How many others do you think are out there that are too scared, lazy, or are just willing to throw money away on a product that doesn’t deliver on it’s promises??

I opened a ticket and got a canned response. I responded telling them the readings were wrong. Such a disappointment. I was hoping for something close to continuous readings.
The amazfit watch reading was pretty close until it bricked. It did prove that reading can be done from wrist. Not continuous and expensive now.
Regards
David

I opened a ticket and got a canned response. I responded telling them the readings were wrong. Such a disappointment. I was hoping for something close to continuous readings.
The amazfit watch reading was pretty close until it bricked. It did prove that reading can be done from wrist. Not continuous and expensive now.

I charged my watch yesterday and it’s already at 67%, so that’s not going to make it three days based on that drain rate. That’s with three SpO2 readings today and four some time yesterday. Don’t remember if that was before or after charging. I imagine continuous SpO2 wouldn’t last a day and maybe that’s ok if you need that. I don’t think my needs are more than a couple times a day (scheduled) and I can do a check if I ever feel run down. As for accuracy, my finger readings are normally 98+, so unless I can catch some rare 97 or less, I’m not in a position to file a report. Best bet is to keep looking for other watch folks that have regularly low readings and compare.

You gave up too easily! That’s exactly what they are hoping people will do…throw a canned response at you, and try to make too cumbersome for you to continue… and people giving up after the first canned response is EXACTLY why they keep getting away with putting out product after product that doesn’t live up to the advertising hype. My first response was “canned” too. Telling me to try this, try that, do this, do that… I replied with the photo, and told them I had already done all that, and that I wasn’t going to stop until I got a product that works as advertised. They are now sending me a replacement watch, and if this one doesn’t work, I will raise cane again, until I get a fully functional/accurate reading watch… or my money bad.

I’m not sure if this helps but I have a much better response rate when I have the watch positioned on the INSIDE of my wrist than the outside.

May give that a try, but during the day it means my wyze watch face is banging on the desktop all day. Otherwise, I’ll have to remember to swing it around before and after bed. Maybe I can find a band that has my Casio on the outside and this thing on the inside.

Yep - the material Wyze uses for the face is apparently cheap and is easily scratched. Certainly not gorilla glass. I have found new scratches after wearing it on the inside of my wrist.

Well, I received my replacement watch a few days ago, and all I did was trade one set of problems/issues for another. This one will not even read blood 02 unless is is on the inside of the wrist. If it’s worn in the traditional manner (top of the wrist), EVERY time I try to get an 02 reading, all I get is “please wear watch and try again”…no matter how tightly or loose the band. When I do wear it on the inside of my wrist, I can get it to actually display a reading about 1 out of 3 attempts, but it’s even further off then the previous watch. Comparing it against my finger oximeter, that is calibrated to the Doctor’s office equipment, the finger oximeter reads 90-92%, and the watch reads 98-100% .

As hard as I’ve tried to give Wyze products every opportunity, they just keep disappointing. I just sent in another support request, telling them to just send me a return label, so I can return this and get a refund. Wanna bet it will be at least a week before I get a reply?

I’m done trying to support a company that does nothing but rush out substandard products, and then does nothing about their flaws/failures… except try to hide them by pushing out more substandard products. In the beginning, I thought it would be great to support a small startup company, thinking the products would be better quality then the junk imports… only to find that this company apparently doesn’t GARA about quality or customer support. The ONLY way I will ever purchase another Wyze product is via Amazon…so I can return it without all the wait and hassles.

It took 5 days for me to get a response to my support request for a return, but it did include a return label. So… I’m done with the Wyze Watch, and dealing with Wyze. IF I ever buy any of their products again, it will be through Amazon, so I can return them when they crap out or don’t work as advertised.

All I can say to anyone who has a defective Wyze product… do whatever it takes to get it replaced or returned for a refund! Otherwise, nothing will ever change.

Mine was off only by 4… not bad 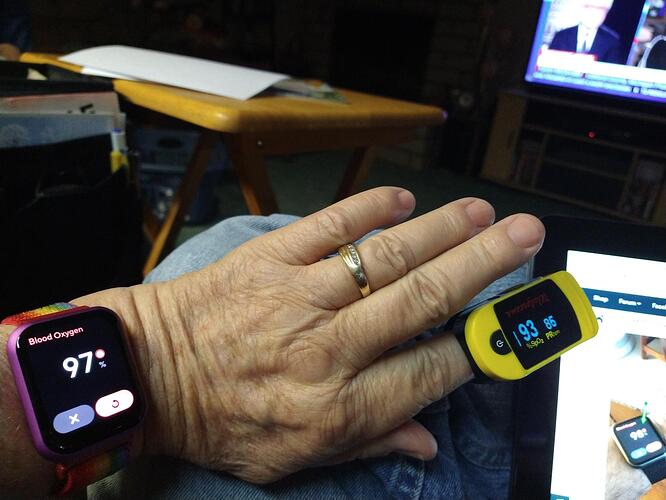