I have recently purchased a wyze cam with the Beta version of the Person Detection. I have four other cameras with the old xnor that have been up and running for a long while. The new cam and Wyze PD are working great. I have had no issues with false person reporting, or not reporting when a person is present. The new cam sends a notification very timely to my iphone whenever a person is detected, which is quite often since its in an area of my back yard where I am a lot. THE PROBLEM: The new cam will not turn off either of my two wyze plugs when ruled to do so. I have tried deleting and reinstalling all rules and devices. I have signed off and deleted the app then reinstalled. I have updated all firmware EXCEPT for the cams that I have still running xnor, which still turn off the wyze plugs when a rule is active, flawlessly. Any thoughts appreciated.

Are you using the trigger of detect a person to turn off or on the plugs? I do not believe that trigger is working yet (as PD is still beta). Let me find some more on this… To be cont…

Edit/. Latest thing I can find is that the detect a person should be working in the production app. What app version are you using? Can you submit a log of your trigger not working? I’ll try and send word to get more info.

Hi Omgitstony, I ran a test just now and “motion” works as a trigger for the plug but again PD failed when I changed the trigger. For some reason the rules history doesn’t show the failure. Maybe I didn’t wait long enough for it to display?

And to be clear- it’s trigger setting “detect a person” which is not working on the plug. Trigger set for “motion” works On the plug. Based on that, your hypothesis on why sounds likely.

The Person Detection trigger does not work.
I don’t know why WYZE chooaes to leave it active.

Hello all! We have loved the waze cams and have wanted to make use of their device trigger / rule settings. Here is what we want:

-when our backyard outdoor camera recognizes a person and sends the person notification (trigger)
-the wyze plug that we bought (with a lamp attached) automatically turns on (making the strangers in our backyard think there is someone home turning lights on).

I’ll attach a screenshot of how we’ve tried to plug it in the app. 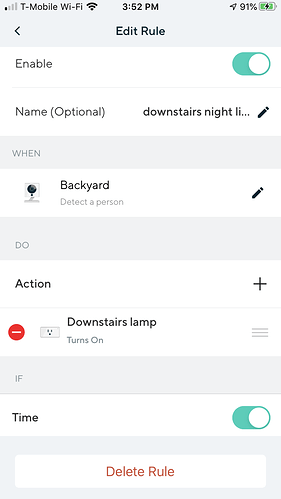 It seems simple enough, but for some reason it hasn’t worked. We get the notification for person coming to our phone but it isn’t turning on the outlet. When I go to wyze app, I can turn on and off the outlet (and therefore light with it) manually, but not via this rule trigger.

Any help is much appreciated!
Jack

What app version of the beta or production Wyze app are you folks using? At one point the PD rule trigger did not work (PD is still in beta), but in a thread a Wyze employee stated per the Devs the rule should be working and it’s reported by other users that they have not gotten it to work.

There are multiple threads on this, check the forums for previous posts to see what others have encountered.

Neil, Sent from my iPhone

I do have person detection set up for that camera. I watch the event tab, and I see the camera detects motion immediately, but it can take up to 15 seconds for that event video to be tagged “Person.” In the past, when Person Detection was done on the camera and not in the cloud, that tag was immediate.

It could be that since person detection is not local, that Rule won’t work because the camera has no feedback that a person is detected anymore.

If in fact the personal detection takes place in the cloud after cam motion detection has tripped couldn’t they enable a cloud trigger (person detection) for a rule? I understand the time delay but for now, as they work to optimize person detection AI, a delayed cloud based trigger for our specific needs is better than no trigger …

Neil, Sent from my iPhone

I’m only making a supposition that it is because of the new person detection being done on the cloud. As for what they can or cannot do, I have no idea.

There isn’t much sense in speculating on why it doesn’t work. As long as the devs believe that it does work it will never be fixed.

Hi Jackstangl,
I had the same issue with my Pd accurately triggering upon seeing a person but rules written will not work the wyze plug. I was told that the beta version of Pd will not trigger the plug. That squares with my experience, as I tried a dozen or so rule rewrites and camera restarting and resetting and was never able to get it to trigger the plug.
Regards,
Chuck.

Same issue here, on two of my Wyze cams where I want an outlet to be triggered to turn on a light in the event of person detection. As posted above, I set this to trigger only between 8pm and 6am. It doesn’t work.

BUT… as soon as I turn off the time feature so that the triggers are in effect 24 hours a day, everything works fine.